Although 2021 has been better than expected for the Mexican economy, factors such as the slow vaccination process and the spending priorities of President Andrés Manuel López Obrador’s administration pose a large risk to the country's finances, says Alejandro Valerio, Associate Practice Leader Mexico and Central America of FrontierView. “The country’s economic recovery will continue in 2022 mainly on the back of exports to the US. However, we should expect an uneven recovery across industries and segments amid a challenging operating environment.”

From the beginning of the pandemic, markets have witnessed the Mexican economy's growth prospects increase. Just in early August, the International Monetary Fund (IMF) raised its growth outlook for Mexico from 5 to 6.3 percent in 2021, whereas by 2022 it expects the Mexican economy to grow by 4.2 percent from the 3 percent previously expected. A month earlier, the World Bank raised its forecast for Mexico's economic growth in 2021 from 3.7 percent to 5 percent, largely supported by the recovery in the US. “About 40 percent of the population in developed economies has been fully vaccinated, compared with 11 percent in emerging nations and a very small fraction in low-income developing countries,” IMF Chief Economist Gita Gopinath said in a statement. To date, 45.6 percent of Mexicans have received at least one dose of a COVID-19 vaccine, according to Our World in Data. 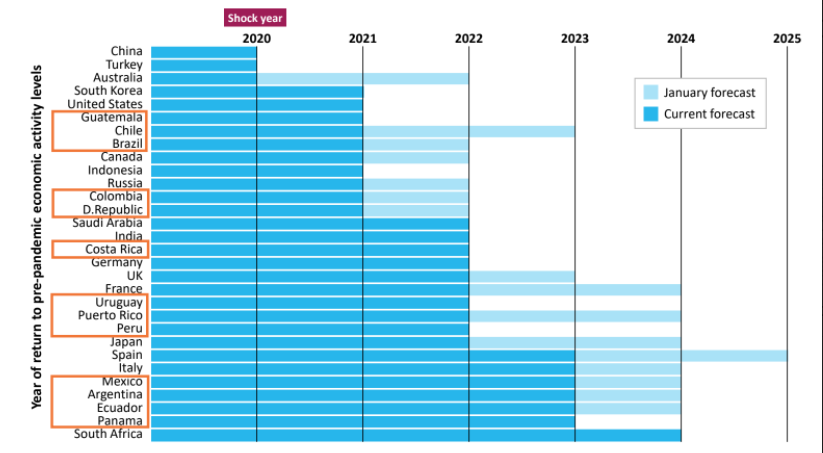 Nonetheless, Valerio warned, Mexico will not return to pre-pandemic levels until late 2023 or early 2024. This effect is partly due to the government's lack of fiscal stimulus, which amounted to less than 2 percent of GDP, “the lowest among all major economies” and only surpassing Uganda when compared to 80 countries. “This is related to the austerity policy of the current government, which was one of the reasons why over 1 million SMBs closed permanently," he said. Due to the lack of fiscal stimulus, the country's sovereign debt remains relatively stable, he added, which explains why rating agencies have issued red flags for countries that "exceeded themselves in dealing with the COVID-19 shock.” 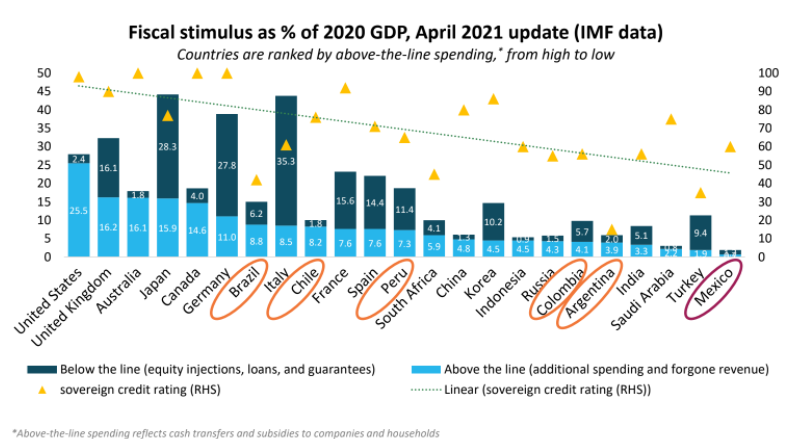 In addition to economic stimulus, recovery continues to be linked to the vaccination process. According to FrontierView, Mexico has secured enough vaccines to immunize 99 percent of its population but the process has been sluggish. By late August, only 27 percent of the country's population had already received the two shots. Other countries in the region have vaccinated much larger segments of their population: Chile already vaccinated 72 percent, Ecuador 50 percent and Brazil 31 percent. Mexico, on the other hand, is expected to have 80 percent of its population fully vaccinated by early 2022, FrontierView data reveals. 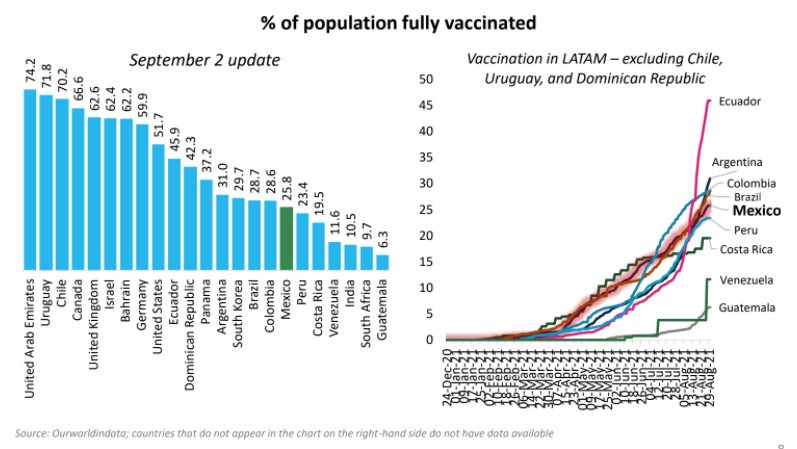 The emergence of new virus variants has also posed a challenge to countries' economic recovery, Valerio said. Countries with very high vaccination levels such as Israel and Chile have shown rising infection trends in the face of these new variants. According to Valerio, Mexico has a head start in this regard as the vaccines it has applied have been diversified, from Pfizer, AstraZeneca, SputnikV, CanSino and recently Moderna. “This has led to an improvement in the trend of infections compared to 2020. The data and the trend indicate that Mexico will not return to the same situation as in 1Q20.”

The situation for companies will continue to be challenging, Valerio noted, as issues on the government's agenda including the outsourcing reform, changes to the energy reform and the tax reform currently underway pose major hurdles. While the outsourcing reform will bring negative impacts such as increased labor costs and a decrease in competitiveness against other countries such as China, the changes to the energy reform will present hurdles for the renewable energy sector. Meanwhile, the tax reform, aimed at targeting large corporations' profits, “will result in an increase in the cost of doing business in the country,” he explained. 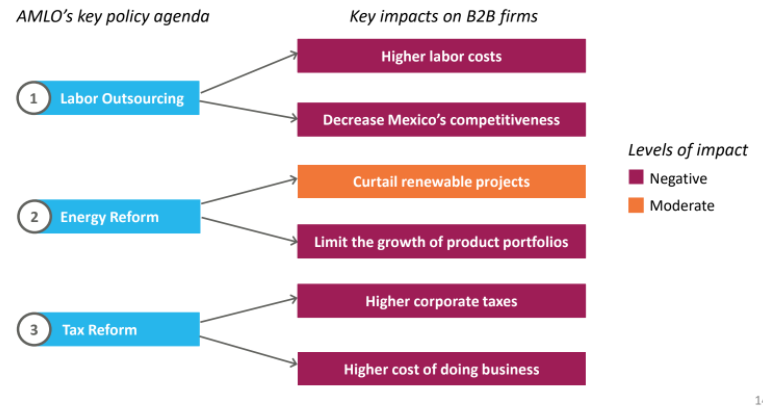