What About Private Brands in Medicine?

Let me start by describing the origins of the use of private labels as a strategy to penetrate generics in Mexico. I promise to be brief. Eighteen years ago, more or less, generic medicines were almost non-existent in the private market. The laboratories that commercialized them concentrated their efforts on selling to the government because building a brand to participate in the private market, even though it offered a great prize for its higher sales prices, implied a high level of investment. How to penetrate that market then? The answer was through the development of own brands.

On the other side of the table, were the retailers that were growing by region, and whose margins were dictated by each laboratory, although we must also remember that wholesalers as a preponderant player in the value chain managed the conditions, including margins. The retailer offered generics, but these had a low level of acceptance. The brands had done their job well for years.

The own brands were the successful formula for the generics producers to penetrate the private market because having the distributor's brand meant the level of commitment and relationship with the pharmacy was much higher, while for the retailer it meant putting his name on the product and ensuring the product and packaging quality to instill confidence in the consumer. Also, as always happens when this strategy is implemented, the retailer gained greater negotiation capacity with the big brands that did not want to be displaced. The rest is history. Let's review the most recent information.

I cannot find another category that has been more successful with the private label strategy in our country than medicines. In the last eight years, volume has tripled from a little less than 7 million monthly average units in mid-2012 to peaks around 20 million in the last few months. In the last four years, the growth of private labels in pharmacy chains and self-service stores was 57 percent, representing a compound annual growth of 7 percent in units, well above the growth of the rest of the market. When I mention the success of private labels in terms of market penetration, they represent 22 percent of the total market in units, with a higher level of penetration as expected in national chains, where they represent almost a third of the units of medicines sold. I cannot find a more successful example in any other category. 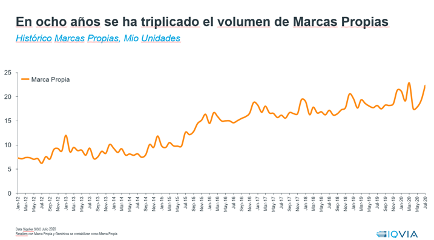 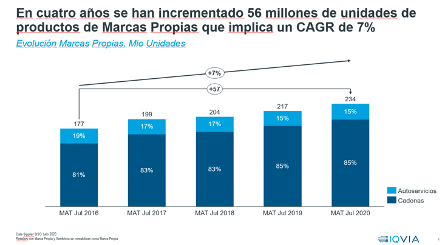 From my point of view, private labels have a value proposal based on three indisputable pillars. Price is the first pillar, since the differentials against commercial brands are appreciated by the consumer and constitute the main factor in a purchasing decision. But there are many generics and many consumers still have doubts about their quality. Here is where the retailer's brand helps to improve customer perception, as the pharmacy staff communicated that these products met all the quality standards and that many of the manufacturers were also producers of other leading products. Communication to highlight this attribute was underpinned by point-of-sale communication ensuring that the retailer reinforced its controls, including audits of manufacturers.

The third element in the proposal is availability. Those of us who participate in this market know that shortages are part of the business, but with the private labels the manufacturer-retailer relationship is strengthened, allowing an alignment of strategies so that the supply is uninterrupted. This helps the client who decides to buy a generic to buy the same grand and not a different brand every month. This is where the desired loyalty becomes a reality in the relationship between the pharmacy and the client.

I’ll end this article by thanking the reader and providing the data that I like best: In a study of nine molecules that lost patent coverage between 2016 and 2017, giving way to marketing generics and private brands, we observe that not only did not show market cannibalization, but the number of units consumed in the market grew and even the innovative brand sold more units. This shows, at least in this sample, that the market can grow while delivering better prices.Thanks to Mario Muniz and IQVIA for the data for this contribution. 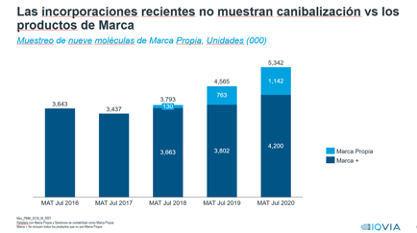 Health
What About Private Brands in Medicine?
Health
Pharmacies are Key to the Mexican Health System