The 2013 Telecommunications Reform was created to clean up the market and the Federal Institute of Telecommunications (IFT) acted as the overseer that would take down any company that was seen to hold more than 50 percent market share. Televisa’s and American Movil’s hold on the sector came to an end as the government heralded a new era of competition. As of December 2015, Mexico had 12.1 subscribers to fixed broadband services and 52.1 subscribers per 100 inhabitants to mobile broadband, according to the OECD. The IFT says more time is needed for the full impact of the reforms to bear fruit, adding that the regulations have already increased competition, improved the quality of the services offered and boosted foreign direct investment (FDI). Telcel and Telefónica now dominate the market but AT&T, which merged Nextel and Iusacell, is a strong contender for 2017.

THE FRUITS OF REFORM

Prices have fallen 23.2 percent from June 2013 to December 2015. Domestic long-distance telephone fees were eliminated, which had an immediate effect on international long-distance prices. Those dropped by 40 percent while fees for mobile phone calls decreased 32 percent. The internet services market also has seen a boost after 2013. Before the reform, the growth of fixed broadband (FBB) services flat-lined. From 4Q13 to 4Q15, household internet services gained steady ground, with a 12.5 percent increase. As of March 2016, FBB penetration was 47 subscriptions per 100 households, equivalent to 20 percent growth in the last five years.

Infrastructure has seen growth but at a much slower rate. In the last two years, 85 percent of households obtained internet speeds between 2-9.9MBps and by late 2015 only 22 percent of homes had internet speeds lower than 10Mbps. More than 75 percent of homes could access speeds of between 10 and 99.9 Mbps. The IFT says that these changes have been due to increased investment from operators in integrating innovative technologies into Mexico’s telecom infrastructure. Companies also began replacing twisted-pair copper cables with coaxial cables. By late 2015, twisted-pair copper cables accounted for 54 percent, down from 66 percent at the time of the reform. 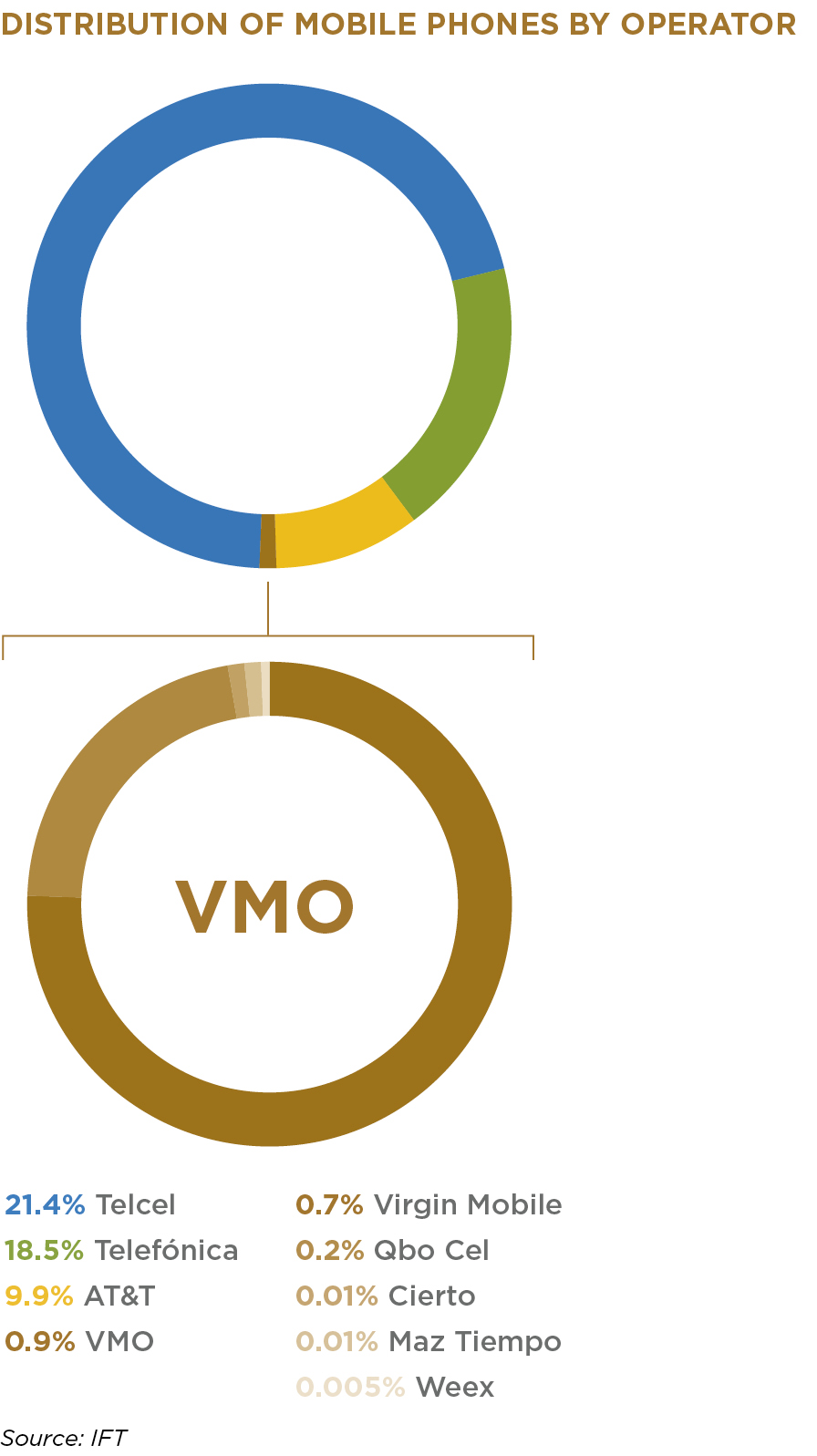 Before the reform, revenue in the telecom sector totaled MX$366 billion (US$19.3 billion). By December 2015, the IFT was boasting an average revenue of MX$427 billion (US$22.5 billion). This figure is growing at a rate three times faster than Mexico’s GDP. Private investment grew 34.8 percent in 2015 compared to 2014 and FDI bounced to 10 percent from 5 percent, making telecoms the thirdmost attractive sector in the Mexican market behind manufacturing and financial services. Telecom operators are seeing the fruits of their investment after reporting more than MX$442 billion (US$23.3 billion) in revenue in 2015, a 13 percent increase from 2013.

The private sector’s investment in telecommunications infrastructure increased by 34.8 percent in 2015 in comparison to the year before, overall investment between 2012-16 has fallen 15.9 percent. At the beginning of this administration, approximately MX$94.2 billion (US$5 billion) was invested in the sector, both publicly and privately, and the Institute of Telecommunications Law (IDET) estimates that in 2016 MX$79.2 million (US$4.2 billion) will be invested.

The Ministry of Finance has slashed the infrastructure budget several times in the last year. The Ministry has proposed yet another budget cut for 2017 of MX$70 billion (US$3.7 billion), meaning that in total, 2017 will suffer a total MX$239 billion (US$12.6 billion) in cuts. The Ministry of Communications and Transport was the most heavily affected with a cut of MX$14.4 billion (US$757 million) in 2016 and it has already begun making changes to its projects and goals for the next few years. The budget cuts have pushed for an increased participation from the private sector but the overall uncertainty of the market has made investors cautious. 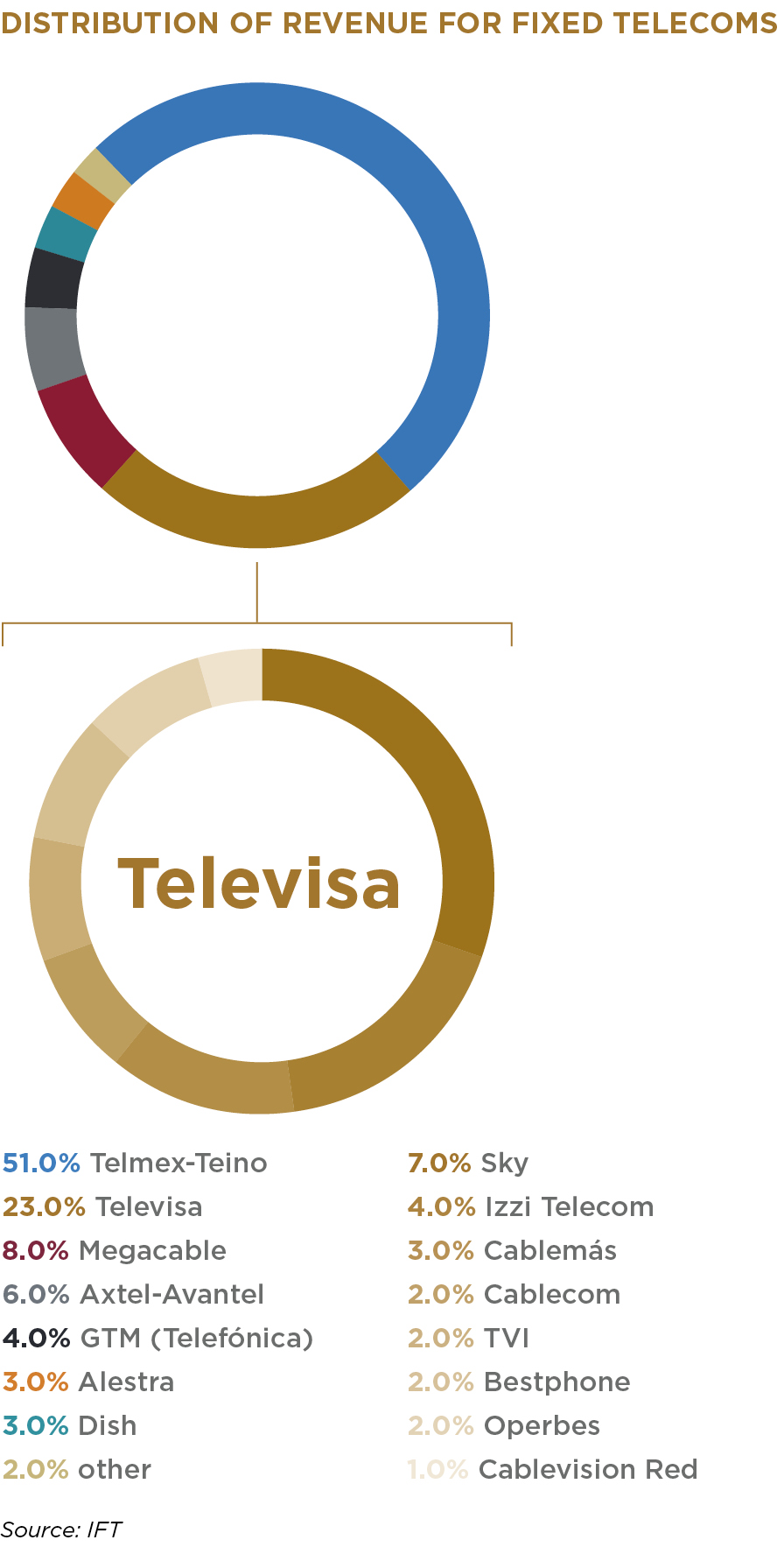 The NIP had committed to the completion of six important telecom projects by 2016. This included the program Mexico Conectado, and the construction of the Red Compartida de Servicios Móviles (Shared Network of Mobile Services).

México Conectado was created to reinforce citizens’ constitutional right to internet access. Through this program, more than 250,000 internet sites were to be installed in schools, hospitals, universities, governmental offices and parks across the country, with a focus on low income and rural areas. As of September 2016, the government has installed approximately 101,293 sites, according to the Society of Information and Knowledge (CSIC). Of these sites, 62.3 percent are educational and work centers, 20.7 percent public spaces and 17 percent are health and community centers. After the announcement of the 2017 budget cut, The Ministry of Transport and Communications lowered the goal of 250,000 to 150,000 by the end of 2018.

The Red Compartida, once an ambitious project, is now in a downward spiral. The main objective of this project was to provide 85 percent of the Mexican territory with internet access by the year 2018. According to INEGI, 30 percent of homes in urban areas have internet connection compared to only 4 percent of homes in rural areas. The conditions of the tender were first released in January 2016 with the goal of announcing winners in August of the same year. That date was then postponed to September and once again until November 2016. The reason for the delay is not only due to the complexity of the project but also because bidders have been requesting clarification.

In 2014, the NIP estimated the cost for the 700MHzband network would have a US$10 billion price tag and would involve construction of 20,000 radio base stations to provide internet coverage to more than 85 percent of Mexicans by 2018. In 2015, The Ministry of Communications and Transport decided that market conditions necessitated a restructuring of the entire plan. It announced the project would be 100 percent financed by the private sector and that it would not be operated by the state. Other changes were also made to the specifications of the project. Its size was reduced to 12,000 radio bases with a total investment of US$7 billion from the private sector yet the condition that the network must be up and running by 2018 remained.

Although the price tag has been significantly reduced, the disillusionment of the private sector looms over the project after the repeated delays. “Clients and cash flow are not guaranteed,” says Ramon Garcia, Director General of Emerson Network Power. “The government has already created an economic plan for the Red Compartida but success depends on an alignment between political and economic factors.” The IFT is working with the private sector to get the project off the ground through meetings with interested parties and a strategy that allows them to submit their opinions on the project. The federal government must increase the attractiveness of the project to rouse the appetite of telecommunications companies to finally get the Red Compartida up and running. “In theory it is an excellent idea but in practice Red Compartida has a steep mountain to climb. Attracting and defining who is going to invest capital into the project is taking too long,” says Garcia.