Fibras, CKDs and CerPIs are becoming ever more popular as a vehicle for Afores to invest in the infrastructure industry, since long-term, stable returns are an ideal match for pension funds. But how are these vehicles really impacting infrastrcuture development in Mexico?

Faced with a with a cash crunch, the government is casting a wider net to meet its budget shortfall to fund Mexico’s much-needed infrastructure projects. SCT’s 2017 proposed budget of MX$84.6 billion is more than MX$20.6 billion less than the year before. SCT will have to do the best with what it has to complete as many NIP commitments as possible by the end of 2018. Funding has always been the Achilles’ heel of infrastructure development, and with the possibility that a great chunk of the budget will go to repair and restore infrastructure destroyed by the two earthquakes in September 2017, the government will have to get creative to fund everything else. When looking for alternative sources of funding, SCT and the federal government decided that their experience in PPPs would help bridge the gap, while sharing both costs and risks with the private sector. In March, SHCP announced 18 new PPP projects with a total investment of more than MX$22 billion for hospital and road projects. Of these, four were road conservation and maintenance projects where winning companies would have to guarantee the preservation of the Saltillo-Monterrey-Nuevo Laredo, Matehuala-Saltillo, Piramides-Tulancingo-Pachuca and Texcoco-Zacatepec highways for 10 years. “These PPPs are being used not only to fill the country’s infrastructure gap, but to maintain and improve the existing infrastructure as well,” says Fernando Montes de Oca, CEO of HR Ratings.

“However, the government can increase the involvement of the private sector in filling this gap, whether it is through PPPs or USPs.” Although SHCP has another package of 18 PPPs for 2018 worth over MX$36.4 billion to help accomplish as many commitments and strategic projects as possible, there will not be many new projects, just like in 2017. “Even though there is hope for new projects to come, it is definitely not what we expected,” says Montes de Oca. “A lack of federal resources greatly impacted the development of infrastructure in the country and external conditions increased the effect even more.” But PPPs are not a magic pill. “We need more infrastructure but not all of it can be built through PPPs, as the private sector assumes most of the risk,” says Diana Munozcaño, Chief Investment Officer of Grupo Indi. “We try to work through unsolicited proposals (USP), which we think is an interesting way of collaborating with the public sector, even though this tool requires a high level of investment that may hinder its application.” 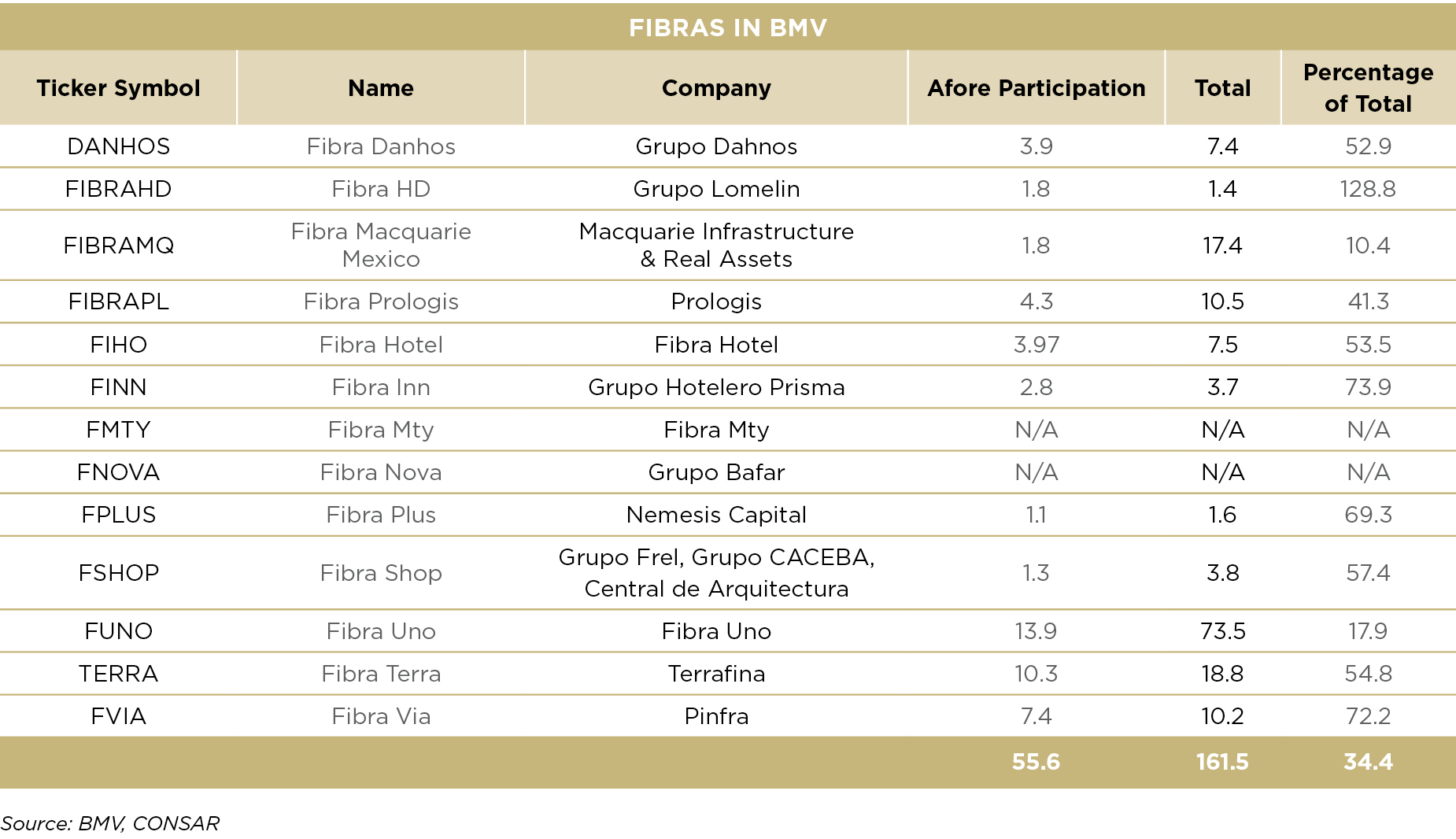 Experts agree that improving project finance structures is only half the battle. The government needs to come up with more options to obtain money to pay for all these projects. BMV became the new ATM machine and Afores the new bank teller for the government to get funds for its projects.

Afores, the Mexican pension funds, began taking matters into their own hands and are becoming more involved in financing the construction of Mexico’s backbone. As of mid2017, Afores manage more than MX$3.02 trillion, representing approximately 15 percent of the country’s GDP. So far, they have invested more than MX$310.7 billion in infrastructure projects. In total, Afores have invested more than MX$196.9 billion in structured instruments, which includes Fibras, CKDs, CerPIs and Fibra Es. Of this investment, 35.5 percent (MX$52.12 million) is invested in infrastructure and energy projects and 27.3 percent (MX$40.06 million) in real estate. Through these instruments, they have been able to invest more than MX$58.5 billion in road infrastructure, financing the construction and maintenance of more than 6,400km of roads according to CONSAR. In the 73 CKDs and one CerPI in which Afores have participated, they have invested more than MX$146.9 billion, making them one of the preferred investment vehicles. “CKDs are a perfect vehicle to capture long-term capital and deploy it in Mexican energy and infrastructure projects because of their lifespans,” says Santiago Ortiz, Director General of GBM Infraestructura. “Their useful life generally lasts between 20-30 years and only Afores can engage in such long-term capital investments.” As of October 2017, only one CerPI has been issued on the BMV. The first CerPI issued was by Mira Companies, a mixed-use real estate developer along with Canadian pension funds, Black Creek Group and Ivanhoé Cambridge. “It will be hard to replicate this vehicle because of the high co-investment the manager must contribute,” says Javier Barrios, Director General of Mira Companies. “The main reason we were able to issue a CerPI is because Ivanhoé Cambridge is also owner of our management company.”

Fibras have also caught the eye of Afores in the last few years thanks to the steady returns generated. “We have seen an incredible boom in the creation of Fibra,” says Montes de Oca. “In the last 36 months, 10 new Fibras have entered the market and we rate nine out of those 10. Fibras will bring into the market new types of investor profiles that have experience with the particular risks of these instruments.” Afores have been involved in 12 Fibras and 1 Fibra E with a total of MX$55.6 billion representing 34.4 percent of the amount issued for the Fibras. Most of these Fibras concentrate on commercial, office and mixed-use real estate developments and a few on industrial and tourism properties. There has also only been one Fibra E issued in the market by PINFRA for a road infrastructure project. “Fibra Es are starting to gain market traction,” says Ortiz. “Investors like holding onto material and operating assets and Fibra Es are an asset to which institutional investors can hold on once the project’s construction phase is over.” Fibra Es have potential to boost road and energy infrastructure in the future but because it is a new instrument, the industry is still adjusting to the requirements and regulatory framework. Fibras on the other hand want to have the ability to invest in more than just offices or commercial spaces for rent. “Fibras will be allowed to invest in other instruments that do not necessarily represent real estate assets that generate flows from rents,” says Jorge Avalos, CFO of Fibra Mty. “Articles 118 and 119 of the ISR Law stipulate that we can only invest in real estate assets that will lead to generation of profit through leasing and that we can invest a maximum of 30 percent in government issuances such as CETES.” In 2017, various regulatory changes regarding Fibra investments were made, which included giving Fibras the ability to repurchase their own tittles. 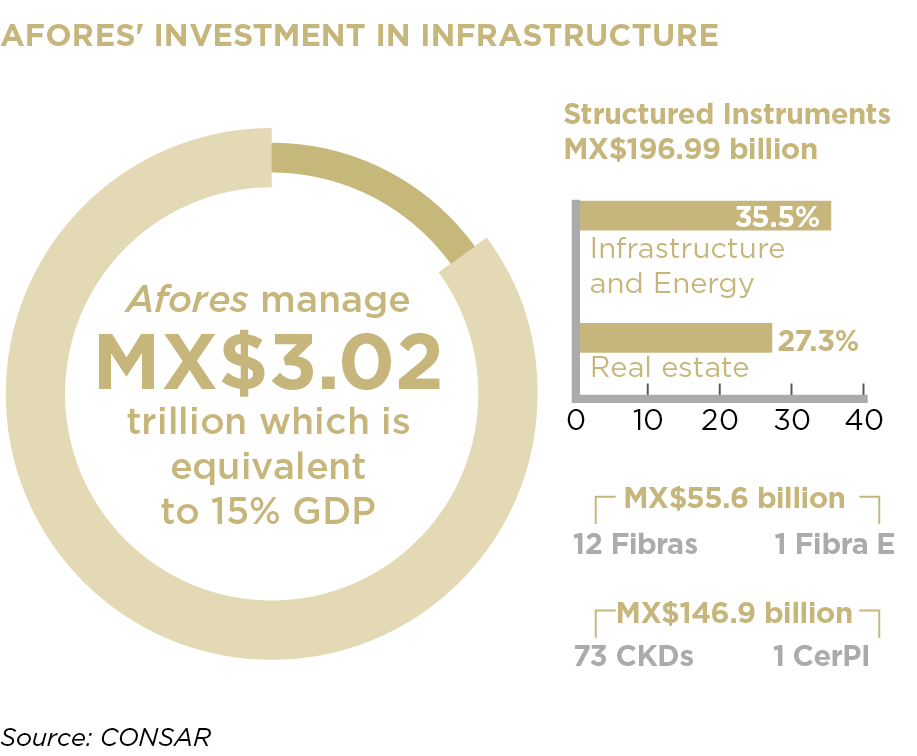 Structured instruments have become a kind of money tree for the industry, but with such fast growth, there could be consequences to the participation of pension funds in these projects and in the popularity of the instruments. “Although the Mexican market has capacity for more Fibras, there has been a great deal of consolidation among the Fibras,” says Montes de Oca. “These instruments grew rapidly through equity and debt issuances in the BMV but the uncertainty in the market has considerably slowed down the Fibras’ growth rates.” It is expected that there could be up to 20 Fibras in the market by 2020, but to continue seeing the solid returns they have had, they would have to consolidate and the regulatory framework would need to be expanded to invest in other types of assets. When it comes to the participation of Afores, the real estate sector in Mexico’s largest cities have experienced such a large boom, that in some areas there are surpluses of assets. In Monterrey for instance, in the last few years there have been so many new office and commercial spaces being created that there are numerous empty buildings. “There is a lot of money to invest in the infrastructure industry,” says Carlos Rousseau, Senior Partner and Co-Founder of Orange Investments. “This can be a cause for concern because there are many people willing to spend a lot of money who are not necessarily equipped with the market intelligence to carry out the projects successfully. Many markets have seen these disruptive projects and this can also lead to bubbles due to the sheer amount of funding available, especially from Afores.”