The Forgotten Jewels in Mexico's Water and Waste Management

Thanks to its geographical location and size, Mexico is known for holding some of nature’s most beautiful treasures. But with an increasingly urbanized population of more than 120 million people, authorities and the private sector must work together to face the rising challenges of Mexico’s water and waste management

According to SEMARNAT’s 2015 report on water, Mexico has 653 aquifers, of which 105 are being overexploited. This implies that 16 percent of the country’s aquifers are being used at a faster rate than they are being replenished. With only 36 reported overexploited aquifers reported in 1972, the progression of high demand and low supply within the space of just 45 years could have dire consequences for the country.

Mexico has a natural water availability of 447.26km3 on average per year, which is higher than most European countries, according to SEMARNAT. The issue is that the four hydrological regions with the highest level of renewable water resources – 67 percent of the country’s total – are located in the southeast of Mexico. But these regions contain only 23 percent of the national population and contribute a mere 22 percent of the national GDP. Meanwhile, the Baja California Peninsula, the North Central Basin and the Valley of Mexico are regions with consumption rates that exceed the aquifer’s ability to recharge by over 100 percent. This implies a misdistribution between the use of water in the country, the location of water sources and the most economically productive areas in the country. 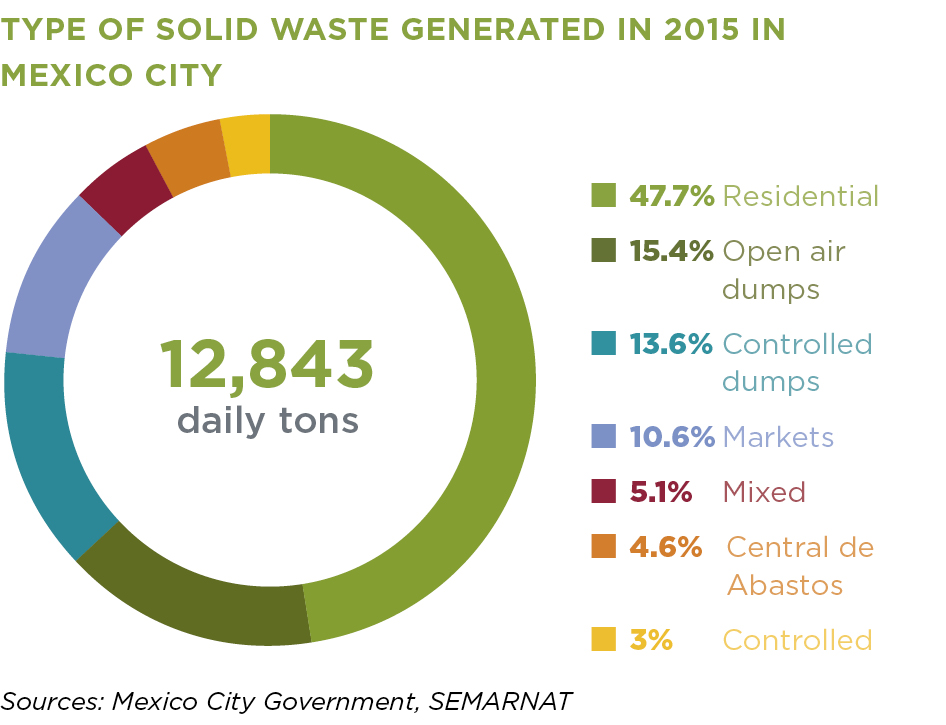 Companies are beginning to identify opportunities to fill significant gaps through international best practices and innovation. But as Roberto Olivares, Director General of ANEAS explains, the private sector often does not prioritize these projects due to the fact they do not offer the level of returns that highways and toll roads do. “The private sector is reluctant to invest in these projects because legally there is no clarity on the roles, responsibilities and returns of each party,” he adds. “There are only five to 10 successful cases of private investment in water infrastructure so for many investors this sector is still too risky.” 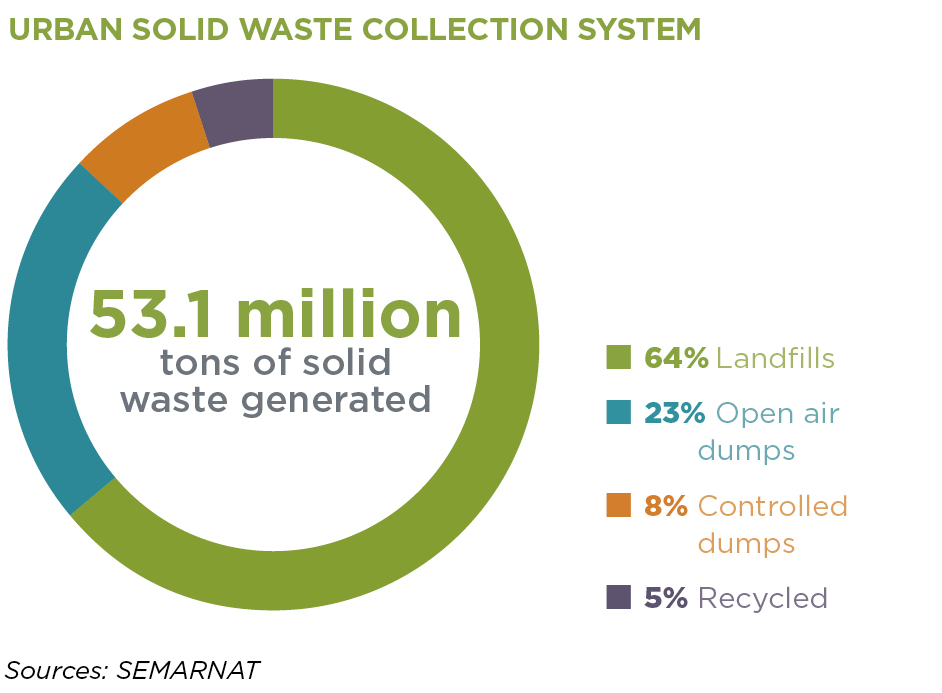 When it comes to the country’s water system, some believe that one of the biggest challenges both in terms of attracting investment and encouraging sustainability is the highly subsidized tariffs that are in place. “Regulations in Mexico are a fundamental area of opportunity,” says Carlos Orduz, Director General of TICSA, a private Mexican subsidiary of state-owned Colombian public-domestic-services company EPM. “Projects in this sector are not financially, environmentally or socially sustainable without a regulatory model where people pay for what they consume. It is the final end user who must pay so that the system is feasible and this regulation must be implemented on a federal level. Subsidizing tariffs removes the urge to save water.”

Considering the context, the country is not simply in need of more water infrastructure projects but requires developments that are sustainable over time. According to Orduz, “even in the case of projects carried out with federal funds and guarantees, if the city government has payment-collection problems, that project will fail.” In this sense, companies like TICSA are interested in working with local authorities and organizations that are committed to providing a service to the people. “We want to work with committed authorities that seek commercial efficiencies, reduction of water losses and that can provide constant domestic water delivery, even in the absence of a compulsory regulatory framework,” says Stefano Sacchi, TICSA’s Commercial Director. 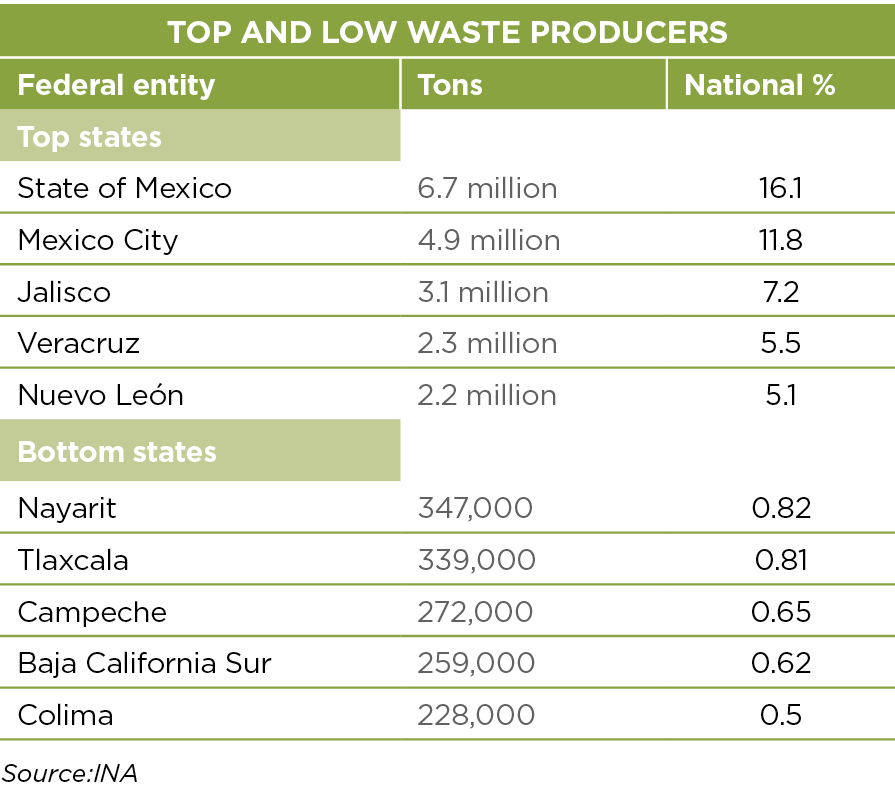 THE STATE OF MEXICO’S WASTE

While its limited supply of water is being depleted, Mexico’s landfills are being filled to the brim. In 2015, Mexico generated 53.1 million tons of solid waste, which is a 61.2 percent increase from 2013, according to the report. This averages out to 1.2kg of waste per inhabitant on a daily basis.

According to Héctor Castillo-Berthier, a researcher and scholar at the Institute for Social Research of UNAM (IIS-UNAM) and a specialist in waste-related social dynamics, the main barrier for more companies to enter waste management is that generally city governments are in charge of this activity and corruption is rife. “Officials often ask for bribes to subrogate these services to private companies, which harms their ability to efficiently dispose of garbage,” Castillo says. 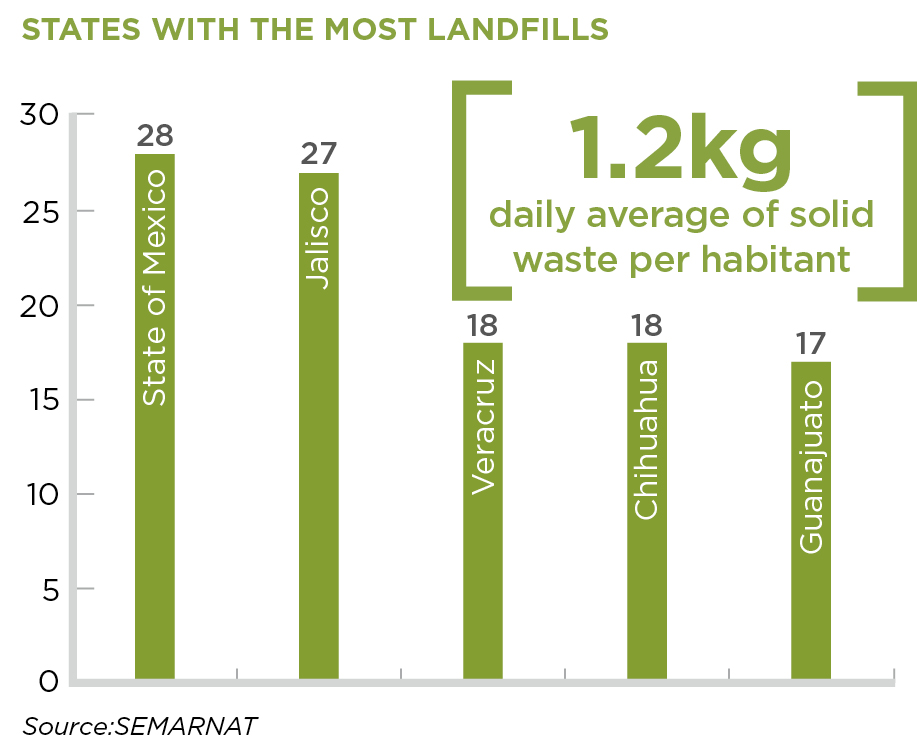 Another issue is that governmental authorities report that over 64 percent of urban solid waste in the Mexican collection system end up in landfills while only 5 percent is recycled and five states alone create 46 percent of the country’s waste. This includes the State of Mexico, Mexico City, Jalisco and Nuevo Leon. Smaller cities that are growing show the fastest increase in the generation of solid urban waste, which from 1997-2012 rose 84 percent from 1.9 million tons to 3.5 million tons.

Cultural indifference in both the public and social sectors are further problems that need to be addressed, says the CEO of waste-to-energy company SUEMA, Jahir Mojica. He says that initiatives that address these issues are often rejected by a political party or agenda. “In Mexico, each day there are more projects aimed at recycling and transforming waste into energy but at a citizen level there is still a large opportunity for growth,” he says. “This lack of culture has also increased prices and promotes informality within the sector.” CastilloBerthier adds that to develop a system in which a city can take care of its waste appropriately, it is necessary to address local disposal systems and the type and amount of waste produced.

Progress is slowly cropping up across the country as cities like Saltillo stand out for having implemented effective water systems. “We like working in Saltillo with Aguas de Saltillo, a company that is 55 percent private and 45 percent public,” says Jordi Valls, Director General of Suez Mexico. “We find its business model to be unique and efficient as it uses a healthy balance of regulatory and business knowledge. It is easier to work under a company with this model and ensure the viability of projects.” He believes that this company has one of the best performance standards in Mexico’s water industry.

But according to the National Association for the Plastic Industry (ANIPAC), the recycling market in Mexico is worth US$3 billion, and growing 10 percent every year. In 2016, BMV-listed waste-management company Promotora Ambiental (PASA) reported profits over MX$3.5 billion. This firm controls 33 percent of the private formal trashcollection market, 19 percent of domestic concession collection and 33 percent of the final waste landfill market.

In May 2017, SUEMA became the first company to install a biodigester in Mexico, which was also the first of its kind in Latin America. “To convince the public sector to invest in these types of projects, we first began offering support in the expansion of the biggest compost plant in Bordo Poniente five years ago,” says Mojica. “With that we began earning their trust and gaining a reputation for our work."