The rise of global warming is causing world leaders to prioritize sustainability. But New Climate Economy predicts an infrastructure need of US$93 trillion worldwide by 2030 to guarantee a low-carbon economy. Fortunately, new investment tools are being released in the market to fund sustainable projects

According to United Nation’s Climate Action, the green bond market saw its biggest jump between 2013 and 2014, climbing to US$36.6 billion from US$14.8 billion. Bloomberg New Energy Finance expects the market to hit triple digits for the first time by the end of 2017, to US$134.9 billion, a 36 percent increase from US$99.1 billion raised in 2016. Of the 24 countries that have issued green bonds, China leads the race as the largest issuer. In 2016, Chinese stakeholders issued 27 percent of all green bonds globally. But Mexico is gaining on its competitors. The Climate Bonds Initiative recognized the NAICM megaproject for being the largest green bond issuer as a nonfinancial corporation through its US$2 billion issuance. 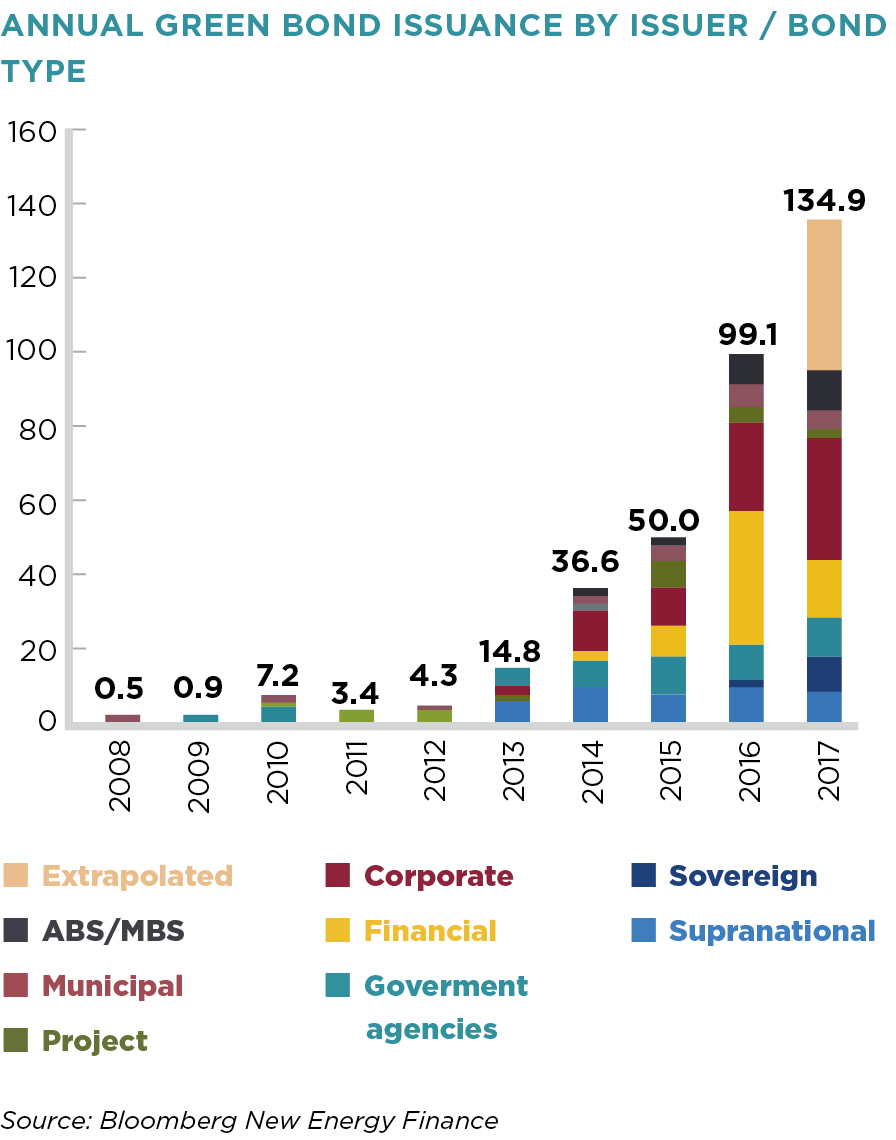 Despite their growth, green bonds only represent 1 percent of the total bonds issued globally, according to Fitch Ratings. Considering its strong track record, the market is an important area of opportunity for projects that seek to expand or further develop. “There is a growing market for green bonds in Mexico,” says Fernando Montes de Oca, CEO of HR Ratings. “Many companies have been turning to them for their projects.”

Mexico has released a total of five green bonds worth approximately US$6.7 billion through development bank NAFIN, the Mexico City government and NAICM. The first green bond issued by NAICM in 2016 was emblematic as it was also the first green bond to be issued for the construction of an airport. Grupo Aeroportuario de la Ciudad de México (GACM) issued a second bond in September 2017 worth US$4 billion that received the participation of 750 investors from Asia, Europe, the US and Latin America.

To further motivate the Mexican market to join the green bond movement, additional regulatory stability and assurance is required. Montes de Oca believes that one of the main challenges is the lack of incentives. “The Mexican market is excited about green bonds but the lack of projects and incentives to get them into the public market are the biggest challenges the industry will encounter,” he says. The market has not been standardized as there is no global definition of a green bond nor established rules, which leaves regulation in the hands of individual governments and local authorities.

Montes de Oca cites Germany as an example of a successful green bond market as many investors have asset allocations and incentives are given to funds that have set low allocations. China also established a Green Financial Bond Guideline in December 2015 through the People’s Bank of China for bonds issued by financial institutions and a Green Finance Task Force that provides recommendations on legal frameworks and fiscal incentives, among other details. “If these incentives are not set (in Mexico) it will be extremely difficult for investors because they also have their fiduciary duty to provide the best returns to their shareholders,” he says. “Once incentives are established the green bond market will boom.”

The Mexican Stock exchange (BMV) could play an important role in this as 40 percent of green bonds are listed on the stock market, according to Mexico CO2, a business founded by the BMV in 2014. It says that the issuance of green bonds through the stock exchange contributes to the development of basic rules and new tools in sustainable finance. The BMV has two green bonds, one from NAFIN and another from the Mexico City government.

Even though green bonds in Mexico have some regulatory hurdles to overcome, companies continue to show support for green bonds in the country and view it as an opportunity to expand ambitious projects. “We are analyzing green bond opportunities and are eager to participate in sustainable infrastructure projects in the future,” says Aniceto Huertas, Director of Fundamental Risk at Afore Citibanamex. “Sustainable investments are a global trend and investors are willing to pay more to promote the development of climate-friendly investments. There are many opportunities that will provide positive returns in the long term.” Rodrigo Assam, Director of Financial Planning and Investor Relations for GICSA, says the developer is “contemplating using various new tools available in the market, such as green bonds and becoming part of the sustainability index.”

Green bond projects can be issued for everything from light-rail extension projects to wind turbine manufacturing. Their potential is massive considering that the Climate Bonds Initiative found that there is a large amount of bonds in the market that are being used to finance low carbon and climate resilient infrastructure yet they are not being labelled as green. These climate-aligned bonds totaled US$694 billion in 2016 from 780 issuers around the world. According to the Initiative, only around 17 percent of climate-aligned bonds are labeled as green bonds.

Interest from the private sector should provide an extra boost as the green bond market has traditionally been dominated by development banks. But interest is sure to progress in Mexico as regulation mandates that by 2024, 35 percent of the country’s energy consumption must be green and companies are being required to meet specific standards in their use of the resource. Montes de Oca says that there are 100 different types of projects that can be catalogued for a green bond to combine the infrastructure Mexico needs with the stipulated regulation in sustainable energy consumption. 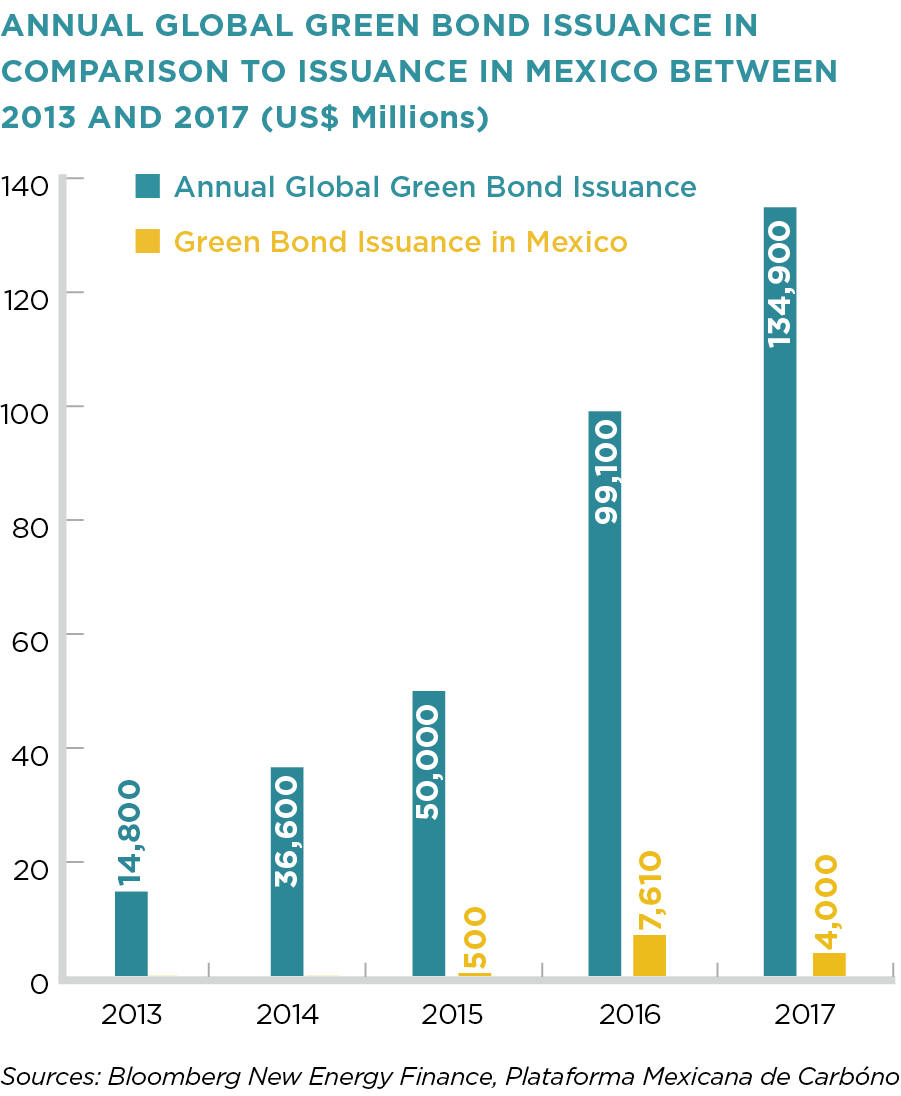 Mexico is at the head of the pack in its commitments to landmark international agreements on climate action such as COP21 in Paris, which is aimed at curtailing global temperature rises below 2°C this century. In this matter, the development of sustainable infrastructure is crucial as infrastructure is responsible for more than 60 percent of the world’s greenhouse gas (GHG) emissions, according to New Climate Economy. The low interest rates available in the market and the development of technology make it an especially opportune moment to invest in sustainable infrastructure-led growth for a better future. “We believe that one of the best alternatives to finance these changes is through the issuance of green bonds,” says Montes de Oca.