‘Smart’ Is Not Enough

Cities have vocations and destinies; yet, the most important asset a city has is personality.

Barcelona and Dublin are spectacular in themselves, not because they are “intelligent” but because they have history, unique spots, spaces of complicity, knowledge and interest. The intelligence in cities should be the core, not the adjective. Cities have always had technology for water systems, energy, transportation, sanitation, hygiene and communications, but they remained London, Amsterdam or Istanbul – without last names.

For 18 years now, Tequila has been incorporating a vocation that is shaping its destiny: tourism. This has not implied ignoring its initial vocation; on the contrary, tourism is a result of the authenticity, culture and sophistication of tequila itself. The city went from natural attractions to tourism products, to value authenticity and Mexican traditions in order to show the essence of “Mexicanness.”

Let us trace some history: For more than 470 years, Tequila was an industrial town dedicated solely to the production of tequila. This industry was –­ and continues to be – at the forefront of technology across the entire agro-industrial and commercial chain.  Therefore, technological intelligence has always been present in Tequila, one way or another. Yet, when a city becomes an intelligent tourism destination and begins to transcend it, it is as a natural result of its maturity: residents and tourists demand it, and its essence deserves it – but not because it is now fashionable to be “smart.” From an industrial town to a tourist destination, technological and non-technological intelligence harmonize to glimpse a better future for everyone involved.

Culture, authenticity, the ecosystem and the community are the pillars on which Tequila was based for defining a plan for the year 2040 as a sustainable, cultural, tourism destination (economic, social, environmental and institutional).

With the growth of tourism from 18,000 visitors in 2003 to 500,000 in 2019, resulting in a ratio of 15 tourists per resident, Tequila needed to evolve in its services, management and governance. In 2013, the Council for the Integral Development of Tequila (CODIT) was created as a governance tool for its optimal management. CODIT was integrated with the public sector, the private sector, academia, the tertiary sector and local leaders.

It also advanced in connectivity, information system and in organic growth. As Joxean Fernandez (2021) states it, "avoiding ephemerality, proposing slow growth, which does not endanger pre-existences that have accumulated organically for centuries..."

As cities mature and become more complex, they need to be analyzed in a systemic way, and must be managed consequentially. Achieving sustained growth in tourism led Tequila to be able to offer different opportunities of growth to its residents. Working in a distillery was no longer the only possibility for work. Opportunities for employment in tourism opened up. Poverty decreased, the economically active population grew, the city's gross domestic product multiplied, and projects were carried out with international organizations such as the Tequila Route with the Inter-American Development Bank (IDB/MIF), the José Cuervo Foundation, and other public-private alliances in the beverages sector.

Tequila’s maturation process has been accompanied by a demand for sophistication from tourists in terms of connectivity, information, quality experiences, gastronomy, and planning, and from residents in terms of access to services, regulations, housing, and security.

This demand led Tequila to consider advancing in terms of intelligence: not only in technological intelligence but also in non-technological intelligence. It should be noted that the latter represents 80 percent of the intelligence needed in a city. This is how, in 2016, Tequila began its process of becoming the First Smart Tourist Destination in Mexico within the methodology of the Spanish Ministry of Tourism (SEGITTUR). This management system has five pillars: governance, accessibility, technology, innovation and sustainability. Tequila, therefore, went from analyzing and planning the issues, to managing them, sizing them and preventing potential problems.

This process has allowed us to start thinking beyond the Smart Destination. We are no longer reacting, no longer waiting for information or seeing how tourists will arrive, or if our carrying capacity would be saturated. We have modeled a way to have a Harmonized Tequila, as we can see in the following infographic: 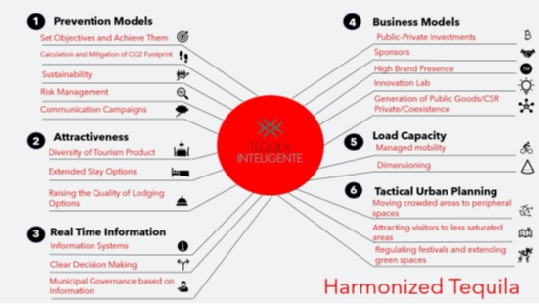 The infographic shows there is a relationship between each of the components, and impacts cannot be measured outside this system. Tequila has sought to have: i) Prevention Models to mitigate risks, reacting as little as possible and, instead, being ahead of them; ii) Attractiveness, because without attraction a city cannot not exist as a tourist destination; iii) Real-Time Information, as without this information it is impossible to prevent, make lucid decisions, and manage a destination; iv) Business Models, since, of course, without business there is no investment (the private sector can contribute to CSR, but ultimately it seeks a return on its investments; the need for public-private investment and the generation of goods is intrinsic to a tourist destination); v) the carrying capacity of a destination is key: if before it was necessary to calculate it due to "over-tourism," now because of the pandemic it is essential not only to measure it, but to manage it; and vi) tactical urban planning: implementing actions that allow deconcentrating saturated areas and activation of areas without tourists.

Hence, Harmonized Tequila seeks, in a logic of complexity and simultaneity, to mature within the reality of a dynamic, changing and challenging city in order to consolidate itself as the First Intelligent Tourist Destination in Mexico. Now that the pandemic is taking a breather, tourists want to return to appealing cities in new ways: open, ecologically friendly, and with public spaces that provide the perspective of the city.

Technology in cities should be in the background, providing what it has always provided: certainty in services, hygiene, safety, communication possibilities, opportunities for education, culture and knowledge. Placing it in the foreground would be like putting the cart before the horse. A city is not a great city because it is intelligent, but because it is interesting: a unique place in the world. But today, no city can be just interesting; it must be consistent in assuring tourists and residents the confidence of safety.

Tequila is a smart city first of all because it is interesting: nowhere else can you see what you see in Tequila. It is the essence of Mexicanness.

The city is neither a museum, nor a chain of attractions, nor a brochure to be validated with tourist "markers." It is above all its citizens interacting, living in freedom; safe, educated, cultured, governed and listened to; and with options: a community with a sense of belonging in an environmentally efficient ecosystem.

Being a "smart" city is a long road. It is an active process that allows no distractions in its management. Pandemics will return with new names, and without an intelligence that combines the humanistic with the technological, investments, good governance, prevention systems and an active society, they can take us by surprise and leave us without answers.