Base metals are on widely different trajectories. Lithium is rising thanks to growing interest in EVs, while zinc did not benefit as expected from a possible supply deficit. Copper may have hit a home run thanks to economic shifts in China.

Behavior in base metals does not manifest itself in the same way as gold, which is largely bolstered by its status as a safe haven in the midst of geopolitical uncertainty. Metals like copper and zinc, on the other hand, rise and fall with the vagaries of supply and demand economics. As the global economy - and manufacturing - gathered steam toward the end of 2016 and into 2017, base metals prices followed suit.

Copper is a good example. The vast majority of global demand for the brown metal – 45 percent – comes from China. It is no surprise then that as China goes, so does copper. As 2016 rolled into view, investors fretted over weak growth in the world’s second-largest economy, whose rapid growth had underpinned the metal for a decade. But the behemoth was slowing, and in January copper hit its lowest mark in more than six years. While the metal roller- coastered for much of the year, it kept above that low and by year’s end was tracking strongly higher, buoyed by Chinese government stimulus plans and in the US, hopes that President Donald Trump would follow through with a campaign pledge to build more infrastructure.

The brown metal reached its highest level in two years in July 2017 thanks to a more positive forecast in Chinese economic growth and a possible scrap metal import ban. In the first half of 2017 alone, China imported 1.85 million tons of copper scrap in comparison to refined copper imports of 1.54 million tons as shown by customs data.

Another factor underpinning copper is a possible deficit in supply. The metal is a staple in sectors such as electronics, infrastructure, industrial machinery and transportation. According to the International Copper Study Group (ICSG), 6.2 million tons of copper was produced globally between January and April 2017, a 3 percent drop from the 6.4 million produced in the same period in 2016. Raul Jacob, Vice President of Finance, Treasurer and CFO of Southern Copper Corporation (SCCO), stated in the company’s 1Q17 earnings call that “after five years of copper price reductions, we see supply underperforming market needs in 2017.” He estimates a deficit of about 100,000 tons for the year.

The supply deficit helping copper has not done the same for zinc, where the deficit has not been as severe as expected. In 2016, zinc was the strongest performing metal on the London Metals Exchange (LME) thanks to the closures of major mines. This sparked a 60 percent rally to US$2,906/t from US$1,548/t at the beginning of 2016. Prices skyrocketed as the closures were projected to create a favorable imbalance in supply and demand. According to the International Lead and Zinc Study Group (ILZSG), global demand for refined zinc was expected to be greater than supply in 2017. But Claire Hassall of consultancy CHR Limited said at the 2017 International Zinc Conference in London that the optimism may have been misplaced.

Despite the major mining closures, world zinc output still climbed 7.3 percent in the first four months of 2017 in comparison to 2016, attributed to a rise in mine production to 4.27 million tons from 3.98 million tons, according to ILZSG. Robin Bhar, head of metals research at Societe Generale, forecasts that prices in 4Q17 will average US$2,520/t. “There is always a danger that the market will be capped by producer selling and that hidden inventories will seep out. That is a perennial problem,” he says.

Heading in the other direction is lithium, boosted by the unwavering trend toward sustainable production. “The growing demand for renewable-energy solutions will reflect well on metal prices,” says Phil Hopwood, Global Mining Leader at Deloitte. “Lithium, cobalt, nickel and graphite are all key components of batteries, which are emerging as a popular alternative to diesel fuel.” The growing use of electric vehicles (EVs) is marking the beginning of a “white petroleum” era. According to Fortune, given that pure EVs account for less than 1 percent of all vehicles on the world’s roads, “the potential growth in demand for lithium is dizzying.” A 2016 Goldman Sachs report suggests that demand could triple within 10 years to 570,000t/y.

According to Joe Lowry, President of Global Lithium, a company that provides advisory and consulting services to lithium producers, lithium sales could even reach the US$5 billion mark before 2025. But, it is not all good news. “Despite the high level of interest and clear upside in demand for lithium chemicals over the next decade and beyond, lithium is still by any standard a very small global market,” adds Lowry. “Supply growth beyond 2017 is still a question mark.” Elon Musk, EV leader Tesla’s Co-Founder and CEO, said at the opening of the company’s lithium Gigafactory in Reno, Nevada in March 2016 that, for Tesla to meet its target of 500,000 cars a year, “we would basically need to absorb the entire world’s lithium-ion production.”

The commodity landscape is not in a strong position and many mining companies lack the capital to fund innovative projects such as the extraction of lithium. As a result, few are choosing to plunge into the market. Technology companies in the US and Asia are particularly concerned about a possible shortage in battery supply and are creating strategic alliances and joint ventures with exploration companies to ensure a stable source. As a traditional mining country, Mexico is unlikely to miss out on lithium opportunities.

According to Bacanora Minerals, one of the state’s only lithium operators, “Sonora holds one of the world’s largest lithium resources and benefits from being both high grade and scalable.” The state has an indicated mineral resource estimate of 4.5 million tons of lithium carbonate equivalent and an inferred mineral resource of 2.7 million tons of lithium carbonate equivalent. Jorge Vidal, Minister of the Economy for Sonora, says there is a consciousness of the fact that battery-powered automobiles from companies like Tesla are making lithium increasingly attractive. Apart from Bacanora’s Sonora Lithium project, Sonora is also

home to the Electra project owned by Lithium Australia and Alix Resources. Sonora Lithium still has a long way to go before it reaches commercial production but it already has a purchase agreement with Tesla. According to Vidal, “lithium will ultimately open an alliance between the automotive and mining industries in Mexico.”

WHAT DOES THIS MEAN FOR MEXICO?

Copper is likely to continue its rise as the Chinese ban on scrap metal and economic reforms continue to boost demand for the metal. Mexico produced 766,000 tons of copper in 2016, a 28.9 percent increase in comparison with the 593,000 tons that was produced in 2015, thanks mainly to the consolidation of two Grupo México plants. Globally, Mexico was the 10th largest producer of copper.

Zinc prices will remain stable or drop further as output minimizes the possibility of a supply deficit. Overall, world production of zinc totaled 13.2 million tons in 2016. Mexico sits only behind China, Peru, Australia and the US in global zinc production. The country registered a 16 percent drop in zinc production in 2016 compared with 2015 at 661,000 tons, according to CAMIMEX. Industrias Peñoles is the largest producer in Mexico thanks to its Velardeña mine, followed by Goldcorp with Peñasquito. The four major national producers of the metal are Industrias Peñoles, Grupo México, Minera Frisco and Fresnillo, which cover 65 percent of national zinc production.

Despite the market outlook, national companies continue to bet on zinc production. “Once Rey de Plata is operational, we will have a surplus of zinc concentrate and we will then become one of the few companies in the world to own both a zinc mine and a zinc refinery,” states Fernando Alanís, Director General of Industrias Peñoles. These projects only represent the tip of the iceberg in terms of Mexico’s zinc reserves. “There is a significant amount of unexplored lead and zinc in the sea basins of central Mexico’s Mesozoic region,” says Raúl Cruz, Director General of the Mexican Geological Survey (SGM).

Green trends and technological advances will further increase demand for lithium but it is expected to remain a niche market in the medium term as exploration costs and risks are high. In 2016, worldwide lithium production increased 12 percent in response to the rise in demand for battery applications. In 2016, global lithium consumption reached 212,719 tons of lithium carbonate equivalent, a 9.6 percent rise from the 194,000 tons consumed in 2015.

Going forward, the road ahead will likely prove to be a winding one. According to Metal Bulletin Research: “The path that lies ahead for the base metals is full of uncertainties, risks and opportunities, the likes of which have rarely been seen in previous cycles.” 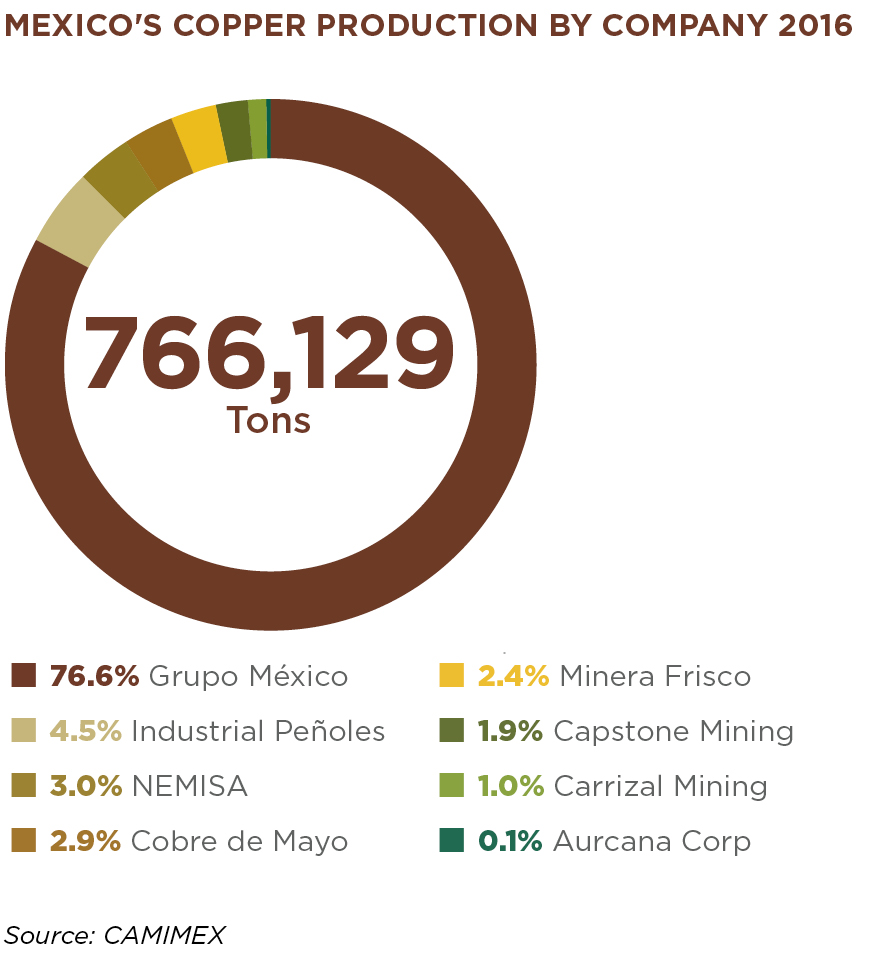