Zinc is the 24th most abundant metallic element in the earth’s crust and the fourth most commonly used metal after aluminum, copper, and lead. In 2013 over 12 million tonnes are expected to be produced worldwide, with Australia, Asia, Peru, Canada, and Europe being the main mining areas. China is currently the biggest producer of zinc, accounting for 29% of total production worldwide. Zinc is most commonly used in galvanization as an anti-corrosion agent for steel, in the production of zincbased alloys, and to produce brass and bronze. These alloys generally have superior corrosion resistance and are used in communication equipment, hardware, musical instruments, and water valves. The automotive, infrastructure, and construction industries are the biggest consumers of zinc, using large amounts of galvanized steel sheets in their operations.

Business analysts expect consumption to exceed smelting output by the end of 2013, as well as throughout 2014. Annually, construction currently accounts for half of consumption, and transport accounts for about a quarter. Because silver accounts for 40% of zinc mining byproducts, and given the precious metal’s poor performance in recent months, according to Barclays PLC we are likely to see significant reductions in the production of refined zinc in the near future, declining by 3.9% in 2013 and 2.8% in 2014. Barclays predicts that demand will simultaneously accelerate, by respectively 4.1% and 5%.

Mexico is today the sixth biggest producer of zinc in the world. The country produced a total of 645,000 tonnes in 2012, which represented a 2% increase over its 2011 production. The global zinc industry has experienced a production increase of just over 5% compared to 2011, due to a 14.4% increase in China’s output of the metallic element, while production in Mexico, Peru, Australia and Canada decreased as a result of the global economic slowdown. In terms of exports, half of Mexico’s output is bought by South Korea.

Mexico’s production in 2012 was evenly split between Mexican and international companies operating in Mexico; Goldcorp, Grupo Mexico, Grupo BAL (Peñoles and Fresnillo), Nyrstar, Minera Frisco, Carrizal Mining, Capstone Mining and Scorpio Mining. From the three Mexican companies, only Grupo BAL (Peñoles and Fresnillo) and Grupo Mexico increased their output last year. Peñoles increased overall production on its five mining units to reach 157,257 tonnes, and Grupo Mexico reached a production of 89,884 tonnes with its Charcas mine in San Luis Potosi, Mexico’s second largest zinc mine in Mexico after Goldcorp’s Peñasquito, increasing production by 13%. Minera Frisco faced union conflicts on three of its eight producing mines, which resulted in a production decrease of 14%. Nyrstar, the Belgian giant and biggest zinc producer in the world produced around 40,000 tonnes in the state of Guerrero at its Campo Morado mine. Zacatecas is the country’s leading zinc producing state, followed by Chihuahua, San Luis Potosi, State of Mexico, Durango, Guerrero, Sinaloa, Hidalgo and Aguascalientes.

Peñoles has invested US$203 million in the Velardeña project, a zinc unit in the state of Durango that has an estimated potential of 2.4 million tonnes, and which has so far generated approximately 700 employment opportunities for the state. Its processing and grinding capacity of 6,000 t/d allows Peñoles to add 75,000 tonnes of zinc per year to its total production. In addition, Peñoles has recently completed a feasibility study for the El Rey de Plata project in the state of Guerrero, where a US$268 million investment will complement production with a grinding capacity of 1.3 million tonnes per year by 2015. With a planned new refinery, which will be built in the next five years, Grupo Mexico will double its current refined zinc capacity, allowing the company to add further value to its operations and stand out from the competition even more. 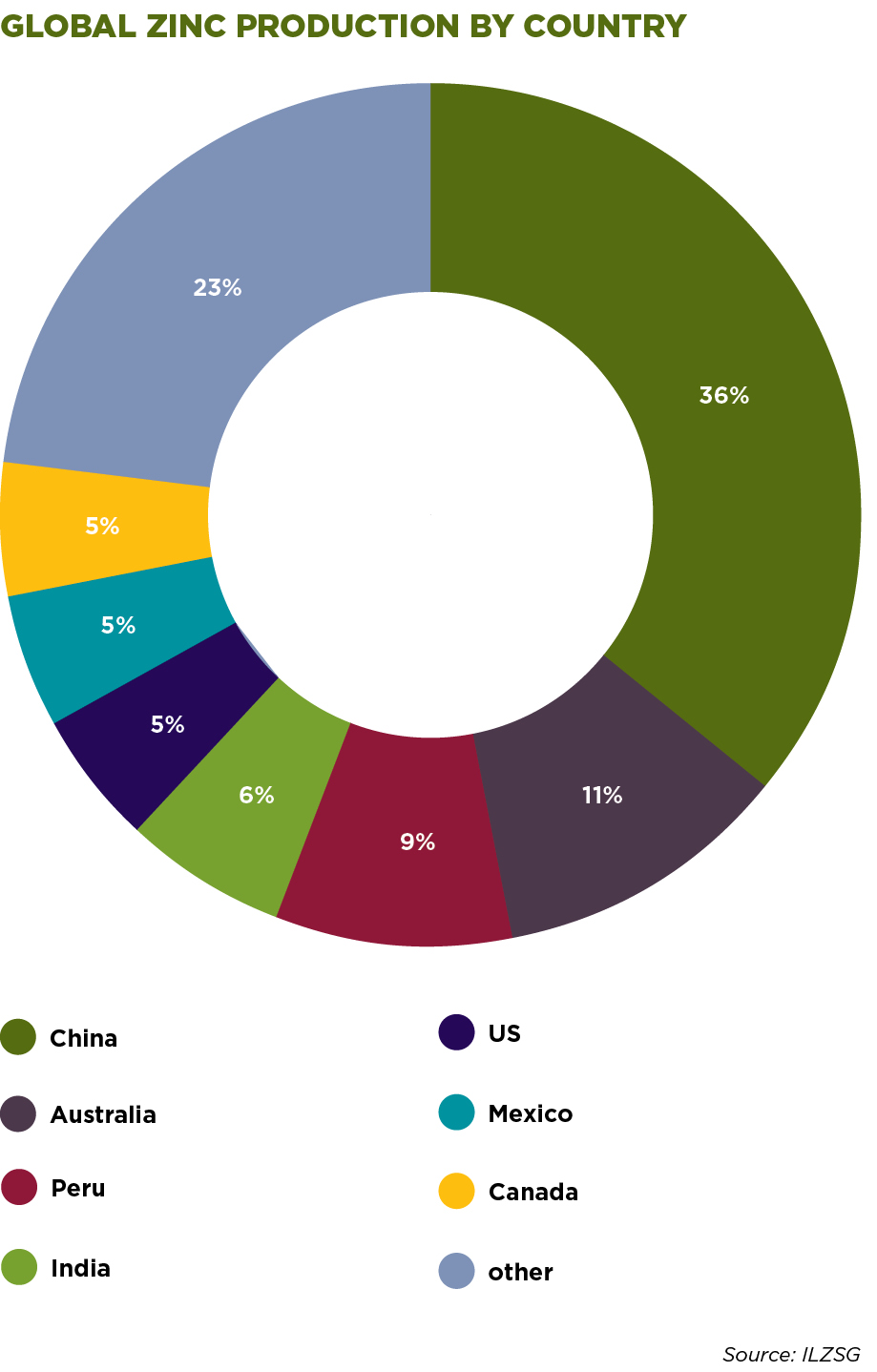