As the third largest producer of celestite in the world, the importance of Mexico in the global industry is unquestioned. For Carlos Hornedo Andrade, President and Director General of Minas de Celestita, it is not just the quantity of celestite in Mexico that is noteworthy, but the quality, too. “Mexican celestite is the only celestite in the world that does not require any processing at all; it can go directly from the mine to the end user. This does not happen in Spain, Turkey or China, where all celestite must go through beneficiation processes,” he says. Minas de Celestita was started in the 1980s to capitalize on the favorable conditions for celestite mining in Mexico – quality and quantity of reserves, stability, good political structure, and social equity – and has become the country’s biggest producer. “Celestite is the main mineral used in the production of strontium carbonate, and back in the 1970s there was a big demand for strontium compounds, especially for strontium carbonate, which was and still is used in the television industry for the cathodes ray tube,” explains Hornedo Andrade. “During the early 1980s I worked with Chemical Products Corp. to start looking at alternative ways to find celestite. During the period from 1981 to 1986 our exploration operations resulted in the discovery of a valuable celestite concession in Coahuila, after having looked in Jalisco and San Luis Potosi.”

In 1986 Minas de Celestita was born, and to this day the company has produced 1.5 million tonnes of high quality ore. The company acquired a number of concessions in Coahuila that covered around 50,000 hectares, on which it carried out a vast exploration program. “It took us over 10 years to fully explore the zone in order to develop the reserves we currently have, and also to reduce the surface area so that we would not have to pay unnecessary taxes,” says Hornedo Andrade. “At the end of the program we had reduced the number of concessions from over 100 down to 50, and the number of hectares from 50,000 down to 5,000.” Hornedo Andrade says that reducing the size of its land was the main objective of Minas de Celestita’s comprehensive exploration strategy. “We were able to be so successful at the exploitation phase thanks to a thorough exploration program. We were very careful and very detailed in quantifying the celestite reserves that existed in Mexico; for every tonne of celestite that we predicted there would be, we had to mine one tonne of celestite. We were drilling rooms, pillars and tunnels on different concessions in order to quantify the reserves; in the long term this helped us to turn from a very small producer of celestite in the early 1980s to the single largest producer of this mineral in Mexico by 1995,” says Hornedo Andrade.

One of the benefits for celestite mining companies is the fact that the exploration process entails much less drilling, and a significantly smaller investment, than metal mining. “Celestite mining starts with surface exploration. It all starts by having small miners walk the mountains, looking for outcrops. At the second stage drilling is required in order to determine the depth of the deposit. In comparison with other types of minerals it is not that complicated,” states Hornedo Andrade.

Minas de Celestita exports 80% of its product to the international market. “For export purposes Minas de Celestita is basically selling all of its product to companies that are related to the oil industry; domestically we are selling strontium carbonate as a compound. For many years celestite was intrinsic in the production of cathode ray tubes, but with the advancements in technology, such as the invention of plasma and LCD screens; while it is still used for this purpose, it is required in much lower volumes. Nevertheless, the main market for celestite still mainly lies in the television industry. There are some materials in the ferrite magnet industry that need strontium, and there is a certain need for it in the paint industry. It has also been used for drilling in the oil and gas industry, together with barite,” explains Hornedo Andrade. Hornedo Andrade points out that another benefit of celestite is the fact that mining it makes almost no impact on the environment. “We perform a lot of tunneling so that we do not damage the surface of the ground. The only impact we make is during the blasting process, when we generate a little bit of smoke and dust. The process is fairly clean and not at all harmful. Celestite is not a hazardous material, so it has zero environmental impacts. We have been very careful to make our operations reliable and environmentally friendly,” he says. Despite the changes in demand for celestite, the mining of the mineral remains a lucrative business. Minas de Celestita reported a 29% increase in production in 2012 compared to 2010, and looks set to have increased its production again in 2013. Hornedo Andrade stresses that the company’s business model is adaptable in the face of change, and capitalizes on the opportunities to grow that present themselves. He also predicts that Mexico, and more specifically Coahuila, will continue to be the base from which the company can respond to those opportunities. “Mexico has the quality and quantity of reserves. We conducted exploration in San Luis Potosi but we found that the celestite there is not as good as that in Coahuila. We will remain exploring in this state in the hope of finding some more reserves,” Hornedo Andrade concludes

Mexico is the world’s eighth largest producer of barite, producing 139,997 tonnes in 2012, which represented a value of US$14.9 million (MX$188 million) according to INEGI. Barite represented 1.4% of the total production of non-metallic minerals in the country in 2012. La Huiche mine in Coahuila, property of Baramin, has reported reserves of 5.3 million tonnes. Production on the mine increased 91% in 2012 compared to 2011, reaching 185,000 tonnes, of which only 2% was sold internationally. 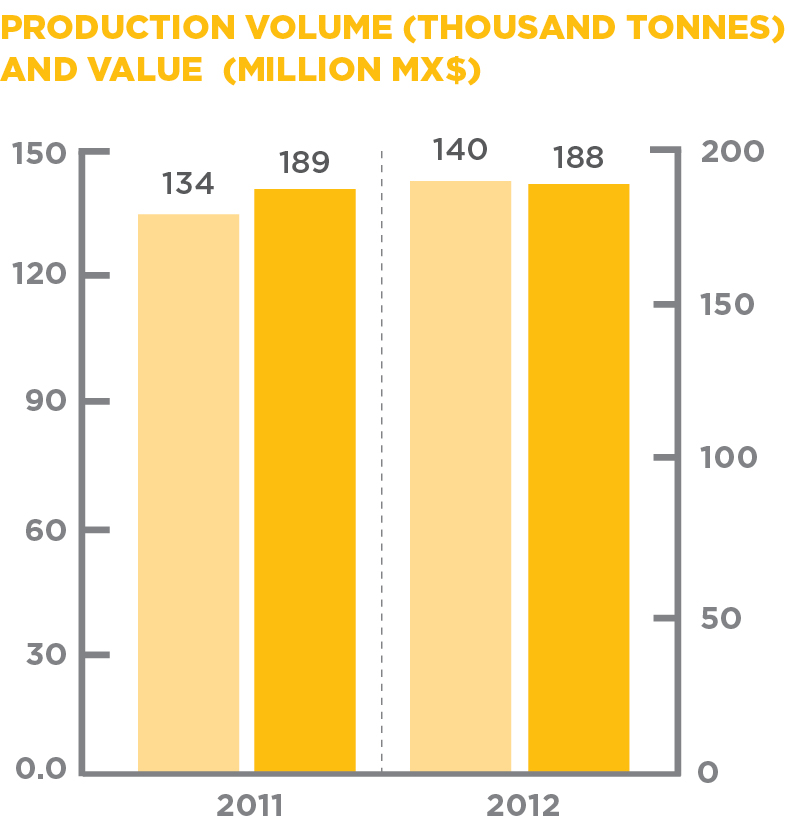 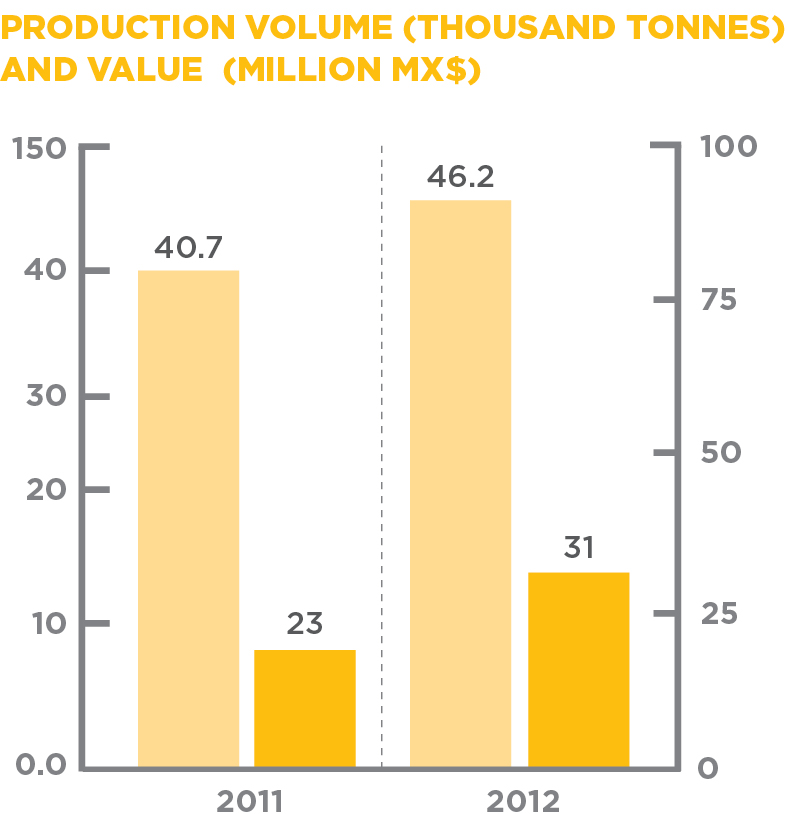 Global production of phosphorite was 210 million tonnes in 2012, representing a 6% increase compared to 2011. According to INEGI, Mexico remains the 12th largest producer internationally, with total production of 1.72 million tonnes, representing a total value of US$98.5 million (MX$1.2 billion). Rofomex is the single largest phosphorite producer in Mexico, with proven reserves of 40 million ounces of phosphorite concentrate. 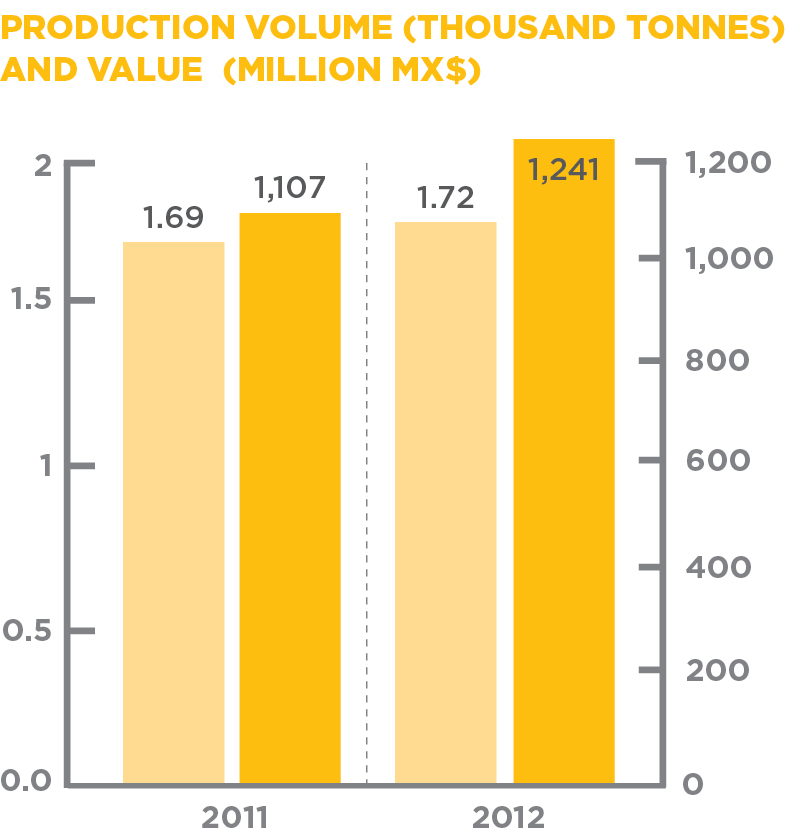