Dueling Tech: Which Alternative Will Pass the Test?

It is estimated that one in every 10,000 exploration projects becomes a mine.

Only a tiny percentage of companies move from the exploration stage to production, a truly tremendous achievement. Getting into production is just the beginning, though. Like any business, mining companies are continuously working on streamlining their processes and improving the bottom line. Altaley Mining’s Campo Morado Mine, the sixth-largest zinc concentrate producer in Mexico, is no exception.

Although Campo Morado has been in commercial production since its June 2020 restart and is currently processing around 2,000 tons per day, the company is in an ongoing quest to maximize base and precious metal production returns. They are also exploring the opportunity of recovering previously sacrificed precious metals.

With the hopes of transitioning from a zinc producer into a primary precious metal producer with strong base metal byproducts, Altaley is exploring competing methods for better recoveries at Campo Morado. The initial plan includes microfine grinding and processing through one of several possible advanced flotation technologies as outlined below. Next, they would follow up with forced oxidization of tailings, using either the Albion™ or Leachox™ processes.

The three primary suppliers of advanced flotation cell technologies are Maelgwyn Mineral Services’ Imhoflot™ Cell, Glencore Technology’s Jameson™ Cell, and Woodgrove Technologies’ SFR or FDR. Altaley is excited to be testing these technologies to determine which one is best suited for Campo Morado and their pathway forward.

The Imhoflot™ pneumatic flotation pilot plant is up and running at Campo Morado and a three-month extensive metallurgical testing program has been initiated.

Maelgwyn Mineral Services Ltd. (MMS) is a world leader in the development and implementation of innovative technologies and processes in the field of mineral, chemical, and waste processing.

Their Imhoflot™ technology was introduced to the mining industry more than 25 years ago and is typically characterized as being a non-impeller flotation system, whereby all the critical tasks are separated in unique and distinct unit operations.

The technology offers high selectivity in terms of grade versus recovery relationship due to very small bubble sizes initially generated in the reactor and very high energy utilization in the mineral collection. It is also efficient in recovering small (<20µm) and coarse (>350µm) particles where tank flotation is inefficient.

Altaley is now in the process of finalizing the delivery of a Jameson Cell™ flotation pilot plant.

Glencore Technology’s Jameson Cell™ was developed to overcome the design and operating inadequacies of conventional flotation cells and column cells. It boasts creating the smallest bubbles for the highest particle attachment to deliver the most concentrate.

Jameson Cell™ has no moving parts, so it has maximum availability and easy maintenance. Common maintenance can also be performed without the plant being taken offline. It is considered an efficient, low maintenance, high intensity flotation technology for low-cost plant expansions.

Jameson Cell™ has had real-world success in 350 installations across 30 countries. In certain cases, one cell has successfully replaced a traditional circuit of cells.
Altaley will initially test the recoveries generated by the Imhoflot™ and JamesonTM pilot plants to compare with the recoveries currently being realized within the mine's traditional mechanical flotation circuit.

Altaley is also exploring and comparing the results from two forced oxidation technologies, the AlbionTM Process, and the LeachoxTM Process, as an additional opportunity to increase metal recovery at Campo Morado. Both have returned successful results in first-phase testing.

Glencore Technology’s Albion Process TM has been used to produce high recoveries in refractory gold and base metal concentrates at their six Albion Process™ plants in operation across the globe.

The Albion Process™ is a combination of ultrafine grinding and oxidative leaching at atmospheric pressure. The sulfides in the base or precious metal concentrate feed are oxidized and valuable metals liberated, with the economic metals recovered by conventional downstream processing. 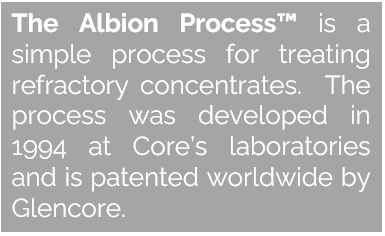 Around the world, Albion Process™ plants are treating a range of materials that include a zinc sulfide concentrate, refractory gold/silver concentrates, and chalcopyrite copper concentrates.

The LeachoxTM Process uses an Aachen Reactor, a proprietary low-pressure, high-shear mass transfer device utilizing oxygen to partially oxidise the sulphides. When combined with the liberation of gold by the ultra-fine grinding of concentrates, it results in acceptable economic gold recoveries. The LeachoxTM process also dramatically accelerates the leach kinetics, reducing the leach time to a few hours from 24 hours for open tank leaching.

The LeachoxTM Process can be used to process fresh and historic tailings to potentially recover both base and precious metals not originally recovered within a mine's traditional mechanical flotation cells.

Successful first-phase LeachoxTM testing previously conducted on Campo Morado mineralization in 2013 by the mine’s previous owner showed that recovery increases of up to 65 percent gold and 86 percent silver are possible at Campo Morado.

The company plans to move to second phase testing of the LeachoxTM and Albion™ processes at micro-fine grind levels by testing tailings and/or concentrate produced through the best performing pneumatic flotation technologies currently being tested at Campo Morado.

This second-phase testing will be conducted on fresh tailings from ongoing mining operations as well as the historic tailings stored on site within Campo Morado’s lower tailing's facility. This historic tailing facility stores over 3.2 million tons of tailings containing significant base and precious metals not recovered in initial historic processing.

A successful phase two program of LeachoxTM or Albion TM testing could pave the way to significantly increase recoveries and revenue from current production and possibly allow for a significant second revenue source at the mine by establishing an independent processing facility to reprocess the historic tailings.

Altaley is excited to test these proven technologies and determine which of them are best suited for Campo Morado.

Initial test results, expected by year end, will be compared to the recoveries currently being realized within the mine's traditional mechanical flotation circuit. Once the results are in and the chosen technology is proven effective, it will be designed, funded and installed into the mill circuit.

With Campo Morado expected to transition into a primary precious metal producer with strong base metal by-products, and Tahuehueto, the company’s near-term gold producer, coming online in 2022, Altaley is well-positioned to transform into Mexico’s next midtier metals producer.

Mining
Dueling Tech: Which Alternative Will Pass the Test?