The fluctuation in the price, production, and demand for iron ore and steel in 2012 and 2013 reflect an increasingly volatile market. Generally both minerals are vulnerable to conditions in the global economy, but given that iron ore is a key component in steel alloys, a rise or fall in supply or demand for either has a direct impact on the other; significant change in steel production in China will have consequences that affect iron ore miners all over the world. In 2012 the spot price of iron ore varied significantly. The peak price last year reached over US$154, in February, but in August it dropped to US$86 per tonne, its lowest level in three years. At the close of 2012 the price was at US$101 per tonne.

In 2012, Goldman Sachs predicted that international iron ore prices would hover around the US$139 per tonne mark in 2013, and drop down to US$115 per ton in 2014. Goldman Sachs’s prediction has not been far off, and though the prices have also been buoyant the price reached US$141.80 per ton in August 2013, the strongest it had been in five months. Despite the drop in price of iron ore, the increase in production has been more or less steady worldwide. In 2012 global production of iron ore reached a new record of 3 billion tonnes, compared to 2.9 billion tonnes in 2011. China is the world leader in iron ore production, producing 1.3 billion tonnes in 2012. The country is followed by Australia in second place at 525 million tonnes, and Brazil in third place at 375 million tonnes. Mexico is in 14th position, with 13 million tonnes of production in 2012.

The reasons for volatility in the iron ore market are complex and are based on various factors. The expansion or contraction of countries’ GDPs may be considered a predictor of the health of the steelmaking and steel manufacturing industries worldwide. Peaks and troughs in Chinese demand play an important part in this. It is also argued that the practice of steel producers delaying the replenishment of their iron supplies, watching the market, and buying when the price is low can cause artificial peaks in iron ore prices. As activity in the steel industry can affect the iron ore industry, so too can the effect be reversed: as the price of iron ore fluctuates, the steel industry is inevitably affected, often adversely if the price of iron ore becomes too high.

Although Ernst & Young reported that the use of steel grew 2.1% in 2012, this is much less than the 6.2% growth seen in 2011, and production outstripped demand considerably. With an estimated 56 million tonne surplus of steel produced in 2012, Ernst & Young considers excess capacity to be the most significant issue the steel industry currently faces driven by a slowdown in demand that is attributed mostly to lower industrial production and reduced investment in large-scale infrastructure projects. While Ernst & Young forecasts production to exceed demand again in 2013, the overall outlook is that demand for both steel and iron ore will continue to grow steadily in the coming years. 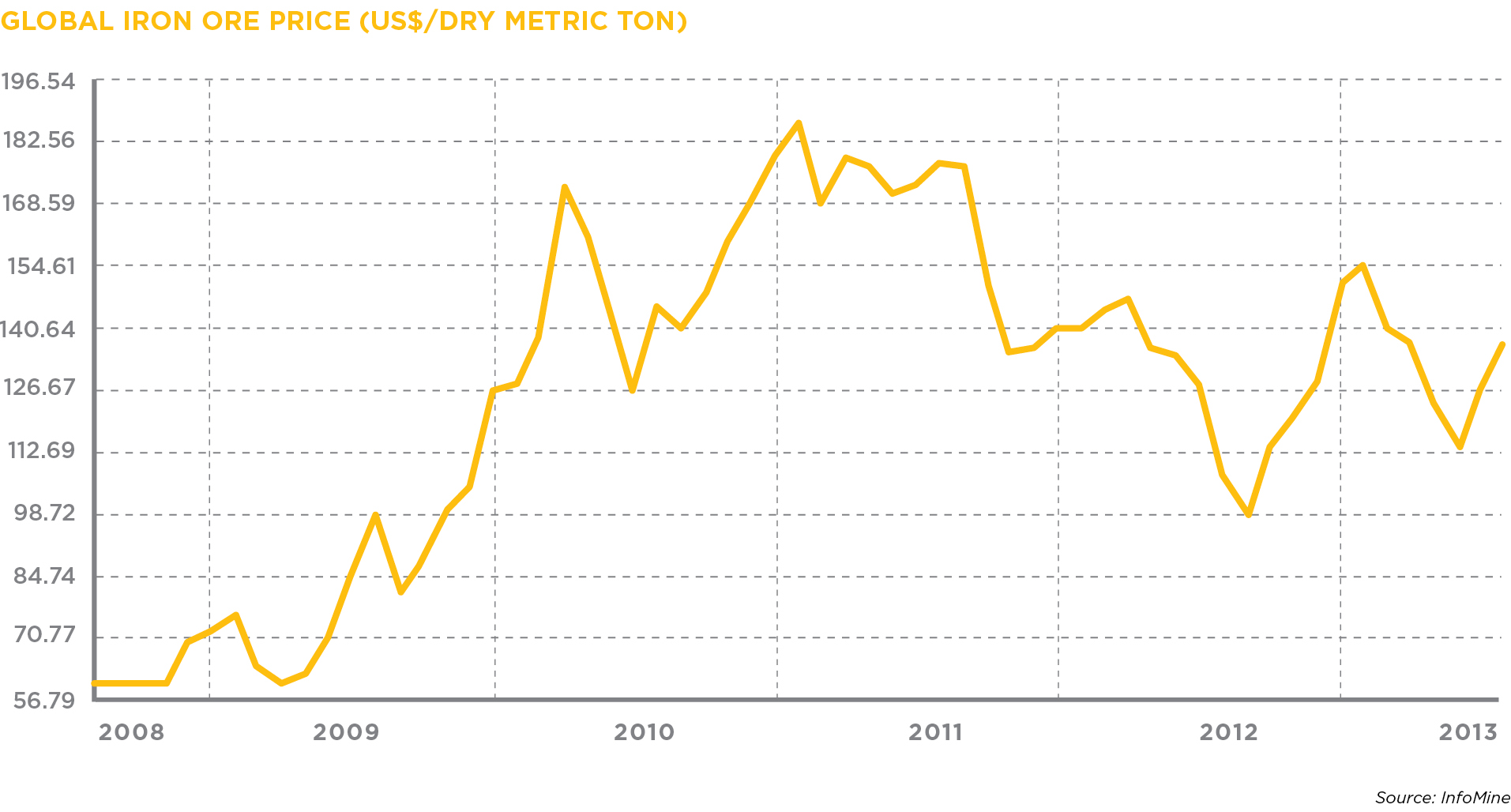