Global Trends in the Silver Market

Classified by chemists as both a transitional metal and a precious metal, silver has many uses. It is the best electrical and thermal conductor among all metals, which makes it very effective in electrical applications. Silver’s properties are expected to secure long term silver demand, even if some industries and sectors have decreased their use of this metal due to structural or economic reasons. For example, photographic film manufacturers – which demand very high purity silver – have decreased their participation in the silver market due to the increasing digitalization of video and photography. However, silver is being increasingly required for the fabrication of photovoltaic cells, an end use that could become an important source of demand for the precious metal in the future.

As the most plentiful among the precious metals - a group that also includes platinum, rhodium, palladium, iridium and gold – silver is also the cheapest. Because of demand resulting from its industrial uses, the silver price is more volatile than that of gold. On average, a 1% change in the gold price is matched by a 1.75% change in silver, both upwards and downwards. Moreover, silver’s low recycling rate and the fact that it is often mined as a by product make supply of this metal less responsive to market demand, thus giving silver a benchmark value that could become a safety net for investors in the case of a dramatic fall in metal prices.

The price of silver came close to its historical nominal high in 2011, but has since fallen sharply. Then shown early signs of recovery. The World Silver Survey 2013 places the average price of silver in 2011 at US$35.12 per ounce, and at US$31.15 in 2012. This is a year-on-year decrease of over 11%. The daily high of US$37.23 for 2012 is also substantially lower than the 2011 high of US$48.70. Furthermore, the London Bullion Market – where silver is predominantly traded - calculates an average silver price of only US$25.14 for the first eight months of 2013, with a partial high of US$31.11 during January and a partial low of US$19.71 for July. If prices remain at these levels, the industry could be looking at a 19% decrease in silver prices between 2012 and 2013. Additionally, while the price of silver has trailed down, its volatility has also diminished. Its average fluctuation ratio stood at 34% in 2012, versus 64% in 2011. Overall volatility during 2012 was 29%, in comparison to 61% the previous year.

Total silver supply rose by 0.9% in 2012, amounting to 1,048.3 million ounces. Mine production was the biggest component of this growth, with a reported 4% increase. This growth countered decreased supply from other sources. For example, net government sales experienced a dramatic fall of 38% and registered a 15-year low. The secondary production of silver – the recovery and recycling of old silver scrap – also fell slightly by 1.6%. World silver mining production has reported sustained growth since 2003, with Latin America as the main driver of this increase. However, the production of silver as a by-product has increased as a share of total silver production, thanks to the sharp increase in all metal prices throughout the past years. Only 28% of the silver mined in 2012 was obtained from primary silver deposits, while 39% of this metal was mined with base metals lead and zinc. Copper and gold mining are also significant sources of silver, with a respective participation of 20% and 13% of total silver mining production. 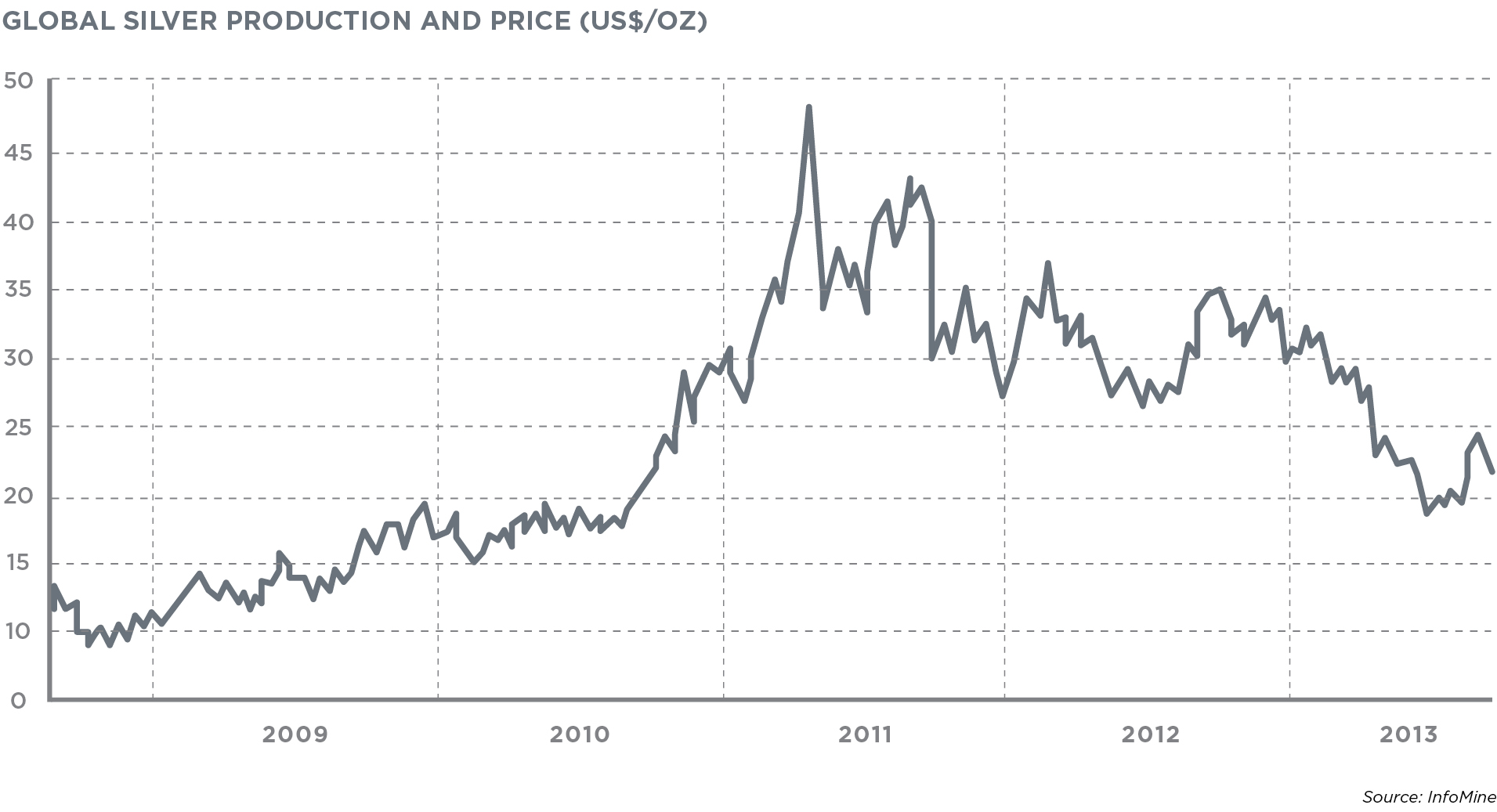