For much of 2013 talk in the mining industry has centered on the price of gold and its subsequent impact on the prolonged boom that the industry has been enjoying. Concerns were first raised in April when the price dropped 15% in just two days. Further volatility followed, with the price dropping below US$1,200 in June 2013, for the first time in almost three years. This represented a more than 30% decrease since the 2011 peak price of US$1,895, and it is the precious metal’s biggest price drop in 30 years.

The decrease in gold demand worldwide and subsequent fall in price are attributed by the World Gold Council to a shift in US investor sentiment. Greater financial stability in the US, the world’s leading economy, set the stage for a decrease in inflation and improved interest rates in the country, which in turn have caused investors to turn to different, riskier investment strategies and away from gold. While speculation over the future trajectory of the gold price continues, investment in mining on the whole has been impacted, on the assumption that lower prices will have a negative impact on miners’ profit margins. While this speculation is a natural result of the recent volatility we have seen in the market, the current gold price must be taken in a broader context, and the vast opportunities for continued profits on behalf of gold mining companies cannot be overlooked. “In spring we saw a big correction in gold and silver; percentage-wise, that was the biggest the market has seen in a long time,” says James McDonald, President and CEO of Kootenay Silver. “A lot of people have withdrawn from the market, partly because they are afraid of a second correction. But we have to maintain perspective because the price of gold is still around US$1,300 and silver is around US$22, and those are good prices.”

The gold mining companies that will prove successful in surviving these uncertain times are those that recognize the importance of keeping cash costs as low as possible, while also making a convincing argument to investors of the healthy return on investment that can still come from investing in gold projects. The noteworthy performance of a number of gold mining companies operating in Mexico today demonstrates that the industry is still more than lucrative. Major gold mining companies such as Goldcorp and Fresnillo remain solid, with a number of gold projects at the production and exploration stages. What is perhaps more remarkable is the emergence of a number of small to medium-sized gold companies that are using their Mexican properties to consolidate their position in the market. Companies such as Argonaut Gold, AuRico Gold, New Gold and Timmins Gold have built success by minimizing the cash costs of production on high quality deposits in Mexico. Due to the favorable conditions for mining in Mexico, for the most part these companies have been able to keep their total average cash costs below US$600; New Gold has been particularly successful in this area, reporting a forecasted total cash cost for 2013 of US$350 on its Cerro San Pedro property, and after setting a record total cash cost of US$115 per ounce in 2011. With the gold price still sitting comfortably above US$1,000, these companies therefore stand in good stead to continue generating excellent profits in Mexico, and there remains a great deal to gain from continued investment in these companies. In the face of continued volatility in the gold price, Mexico is likely to maintain a prominent role in the portfolios of these gold companies, given the quality of the deposits that are still waiting to be mined in the country and the low cost at which they can be exploited. 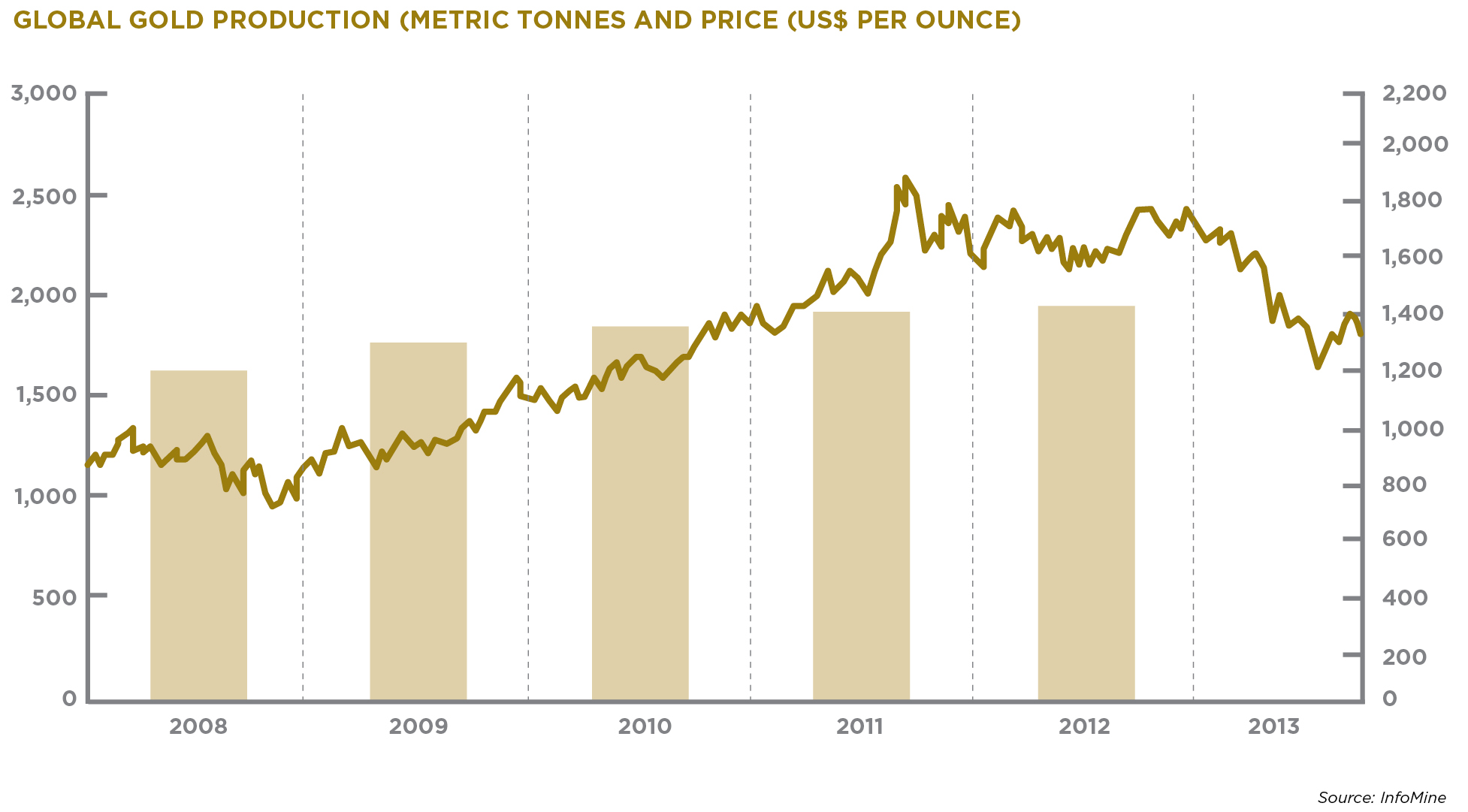