Q: What have been the main accomplishments during your first year on the job as CEO of Fresnillo?

A: For Fresnillo the transition from Jaime Lomelín Guillén to myself came naturally, so I did not need to make any drastic changes because the business was and still is going very well. We place great emphasis on efficiency and cost, and what I have done is to really focus on which projects could grow better and be productive in the downwards cycle the industry is currently in. Fresnillo was born on the London Stock Exchange, when the Chairman and Board of Peñoles strategically decided to split the Group into two companies. Since then there has been a clear strategy for Fresnillo: it is a company focused on precious metals and growth, with a simple and solid business model and an experienced management team. My first year has been very much oriented towards continuing with this strategy.

Q: In just five years, Fresnillo has become the largest primary silver producer in the world. To what do you attribute this success?

A: We are very careful about how we evaluate projects, as we do not want to dilute the quality of our current mines. We are very proud of our operations, and our main criterion is the low production cost potential. So while we are exploring, we concentrate on those projects that combine growth potential with cash cost of production in the lowest quartile.

Q: How has Fresnillo been able to outperform its peers in selecting high potential projects that can be developed into low cost, world class mines?

A: This comes with the experience and knowledge gained from being in the business for so long. We extract and optimize efficiencies at all steps in the process. The strategy we follow depends on the situation at each one of our mines. To give you an example, the main pillar of our business model is that we are now compensating for the lower grade at Fresnillo and Ciénega by finding, processing, and producing a higher volume. With modern technology, we are going to reprocess the low tailings, which will allow the recovery of additional silver from tailings we had previously disposed of. Another key pillar for us is to extend the growth pipeline through exploration and across all cycles in the market. Some mining companies stop exploration during a downward cycle, but we maintain this investment, which is the lifeblood of our company. When Fresnillo was listed in London five years ago, we had approximately 1 billion ounces in silver reserves, and today we have reached 2 billion ounces. We have also grown our gold resources from 11 to 27 million ounces. With this exploration success we have also laid the groundwork for continuous growth. Sustainability is also very important. We have the objective of attaining five zeros: zero new professional illnesses; zero fatal accidents; zero major environmental impacts; zero community conflicts; and zero labor issues. All of this provides the framework for our sustainability approach. In each aspect of our business model we look out for, identify, and measure the risks in each part of the process.

Q: What would be your advice for Mexican mining companies to make them more resilient to the market cycles?

A: Exploration is key, and chances are that if you continuously invest in exploration you will succeed. Of course, you also have to have a team of good geologists. Having spent so long in the country, we have mining concessions in the areas that have the best potential. One key aspect of our exploration model is that we first explore around our existing operations, so that every ounce we find in these areas has more value, because we already have the infrastructure and personnel in place. You can see that, as a result of this strategy, we found El Saucito near Fresnillo. In the case of La Ciénega we also found San Ramón, and in the case of La Herradura, which was our initial open pit mine, we found Soledad-Dipolos and then we acquired Noche Buena. Investment in exploration is certainly the key.

Q: By 2018, Fresnillo aims to have produced 65 million ounces of silver and 500,000oz of gold. What are your strategic priorities to reach these targets?

A: Five years ago the board correctly identified that by splitting Fresnillo, focusing it on precious metals, and subsequently launching it on the London Stock Exchange, we could achieve the right market value for both companies correctly. At that time we identified that we could have a company that was strongly focused on growth, already possessing the land and the projects that could really drive this growth, since the group maintains the largest land area of concessions for precious metals exploration and mining in Mexico, and we set a very aggressive growth target. We said we would achieve twice the production we had in 2008, so we set that goal of 65 million ounces of silver and 400,00oz of gold that we later upgraded to 500,000oz. We are on track, and with San Julián - which comes on line at the end of 2014 - we will add 10 million ounces of silver and 45,000oz of gold. The expansion of El Saucito, due to be completed at the beginning of 2015, will add another 10 million ounces of silver. So with those projects and the optimization of metallurgical processes at Fresnillo, such as the expansion of production to 10,000 tonnes per day and the pyrites projects, we are confident that we will reach that target.

Q: How do you work together with service providers to achieve the lowest cash cost and increase synergies?

A: We work with our suppliers and contractors at every stage, from exploration to production. We create strategic alliances with them and consider them an extension of our company. Only with this vision can we work with them on a long term basis, and they understand that in good times everything is great, but in bad times everyone has to make some sacrifices. We all understand this concept and we keep giving them work through difficult times in the mining cycle as well. We have long term contracts and a long term approach to supplier relations and supplier development. We support our contractors, and they grow with us.

Q: What do you expect to be the respective roles of gold and silver in the evolution of the group’s corporate identity over the coming decade?

A: Gold and silver are equally important to us. In terms of revenue, for example, silver and gold together represent 48%, and the remainder comprises base metals, lead, and zinc. We are identified as a silver company because we are the largest primary silver producer in the world. With the projects we have in our portfolio now, by 2018 it is very possible that we will be the largest silver producer in the world full stop – not just primary. By then we will again have more revenue coming from silver than from gold. We do not prefer one to the other. It is more about the projects we have, and which projects we feel have better chances of becoming a low cost operation. 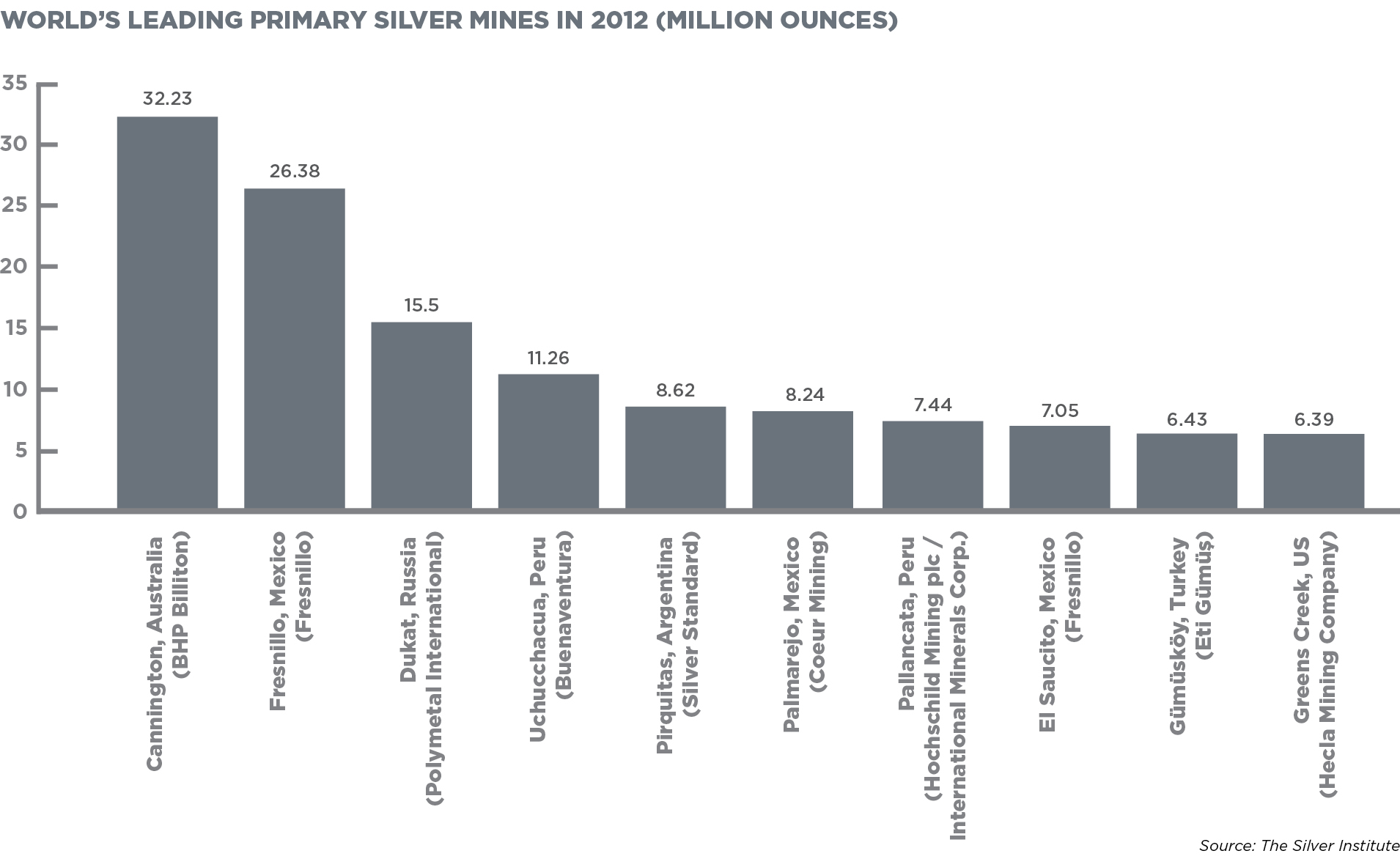