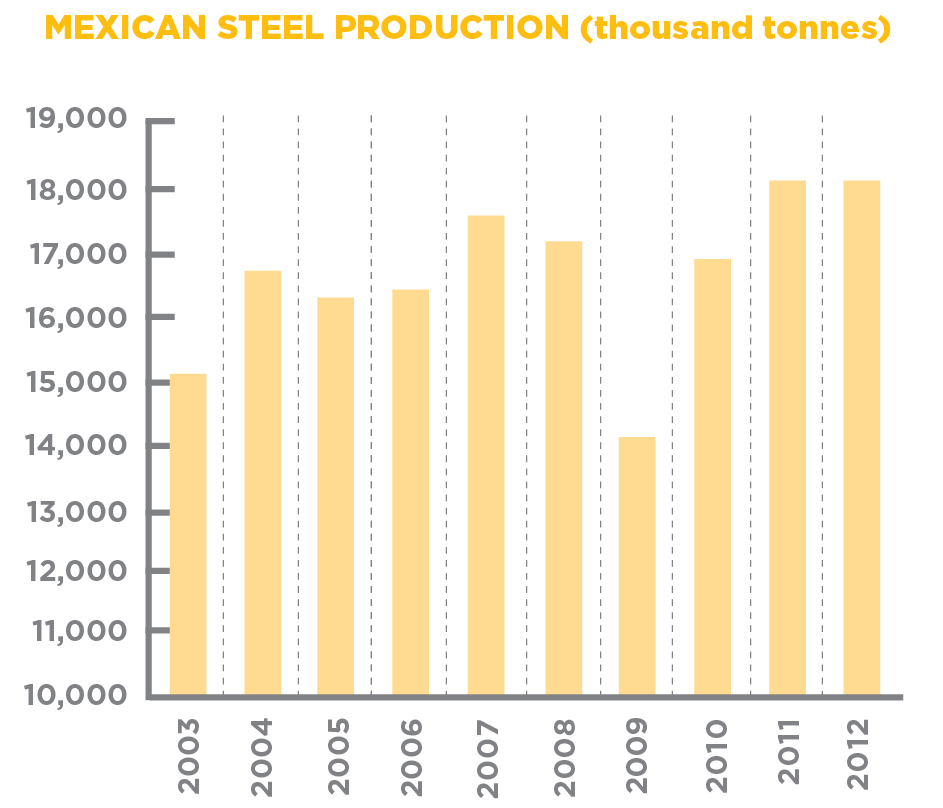 Since 2001 the installed steel production capacity has gradually increased in Mexico. In 2005 it stood at 19.5 million tonnes, increasing to 22.2 million tonnes in 2007. In 2012 an expansion program was put in place to create more infrastructure and increase capacity to 22.8 million tonnes. There has been increasing concern in Mexico about the global steel surplus, which according to Ernst & Young reached 56 million tonnes in 2012. Steel imports to Mexico increased by over a third in 2012, and much of this trade was considered to be unfair or involving dumping practices. The country’s steel sector, together with the Mexican Iron and Steel Industry Chamber (Canacero), is appealing to the Mexican government to put regulations in place that will protect Mexico’s steel industry and reduce the impact of practices such as dumping and artificial price hikes. Given that the steel industry employs over 720,000 people in the country, ranging from the processes of exploiting coal and iron to the running of steelworks factories, from Coahuila and Michoacan to Nuevo Leon and Veracruz, there is much to be gained from ensuring that the industry can continue to grow.

Ternium is Latin America’s leading steel company, with net sales of US$8.6 million in 2012. Ternium began in 2005 as a merger between three Latin American steel companies: Hylsa from Mexico, Siderar from Argentina, and Sidor from Venezuela. The company produces steel, cast iron, coke (fuel), and slag, and is highly vertically integrated. Ternium has a number of strategically positioned production centers in Mexico, Argentina, and Colombia, and thanks to its acquisition of Grupo IMSA in 2007 the company now also has a presence in the US and Guatemala. Its Latin American leadership is also strengthened by its majority shareholding in Usiminas, a leading Brazilian steel producer.

The consumption of steel is growing in Latin America at one of the fastest rates in the world, and Ternium has been well positioned to capitalize on the resulting opportunities. According to Ternium, the region’s 5.6% increase in steel consumption compared to 2011 is only marginally lower than that of India, which had a 5.9% growth rate, and reflects a faster growth rate than the US and Canada with 2.7%, and China, the biggest steel producer in the world, with 3.5%. Though there are many opportunities for Ternium in Latin America, given high demand in the region for lower quality steel, Ternium is also looking to increase its market share in the highend steel market. Estimates regarding the demand for high-end steel in Brazil, Mexico and Argentina between 2012 and 2017 predict a market growth of 10%, most of which is expected to be absorbed by the automotive industry (64%), followed by the energy, packaging and electrical industries (8% each).

Ternium is focusing its efforts on the automotive industry, one of the fastest growing sectors in Mexico. Just recently in September 2013 Paolo Rocca, the President of Technic, one of Ternium’s major shareholders, inaugurated the Pesquería steel complex, a US$1.1 billion investment in the state of Nuevo Leon. With an annual capacity of 1.5 million tonnes, the Pesquería facility has a cold rolling mill specifically for satisfying demand for high-end products, and is capable of producing high-strength, micro-alloyed, and advanced high-strength steel for galvanizing. The company is also teaming up with Tenaris, a leading supplier of tubes for the energy industry, and the energy company Tecpetrol to build an 850MW natural-gas thermo-electrical plant that will supply the energy required.

ArcelorMittal is currently the world’s largest steel producer. With total revenues of US$84.2 billion in 2012, and an employee base of 245,000, ArcelorMittal today accounts for approximately 10% of the world’s steel production. Created from a takeover of Western European steel maker Arcelor by India-based multinational steel maker Mittal, ArcelorMittal is today a global leader in steel markets for automotive, construction, household appliance and packaging purposes.

ArcelorMittal’s growth strategy is applied across the company’s six business segments, though mining is one of its main expansion areas. In 2012 ArcelorMittal produced 55.9 million tonnes of iron ore and 8.2 million tonnes of coal, positioning it as one of the top five iron ore and metallurgical coal producers in the world. In 2012 ArcelorMittal’s global sales in the mining segment accounted for US$5.4 billion. While this is a significant number, it represents a 14% decrease compared to 2011, attributed to the lower market prices for iron ore and coal. Today the company has a network of mining operations in 11 countries including Mexico, the US and Russia. Given its mixture of expansion and grassroots projects, the company is well positioned to fulfill its objective of producing 100 million tonnes of iron ore by 2015.

ArcelorMittal has a number of iron ore projects in Mexico, including 100% ownership of El Volcán and Las Truchas mines in the states of Sonora and Michoacan respectively. The company’s iron ore production in Mexico reached approximately 6 million tonnes in 2012, and its three mines have an estimated mine life of 20 years. ArcelorMittal also has a 50% stake in the Peña Colorada mine in Colima, on which it partners with Ternium, Latin America’s leading steel producer. Its facility in Lazaro Cardenas, Michoacan is Mexico’s largest steel producing unit and slab exporter. ArcelorMittal’s total proven and probable iron ore reserves on its three assets were estimated to be 395 million tonnes at the end of 2012.

One of the main challenges the company has faced in Mexico is insecurity. The company has operations in Michoacan, Sinaloa and Sonora - high risk areas where drug-related violence, including executions and kidnappings of non-gang members, has been occurring.

AHMSA (Altos Hornos de Mexico), is today the largest integrated steel company in Mexico. Founded more than seven decades ago in response to the steel deficit that had come about as a result of World War II and Mexico’s own growing industrialization, AHMSA was funded in part by private capital and in part by the government. Since its foundation, the company has produced more than 120 million tonnes of steel, contributing to both industry development and employment in Monclova, Coahuila, where the company’s headquarters and its core operations are based. The company drives the entire steel making process, from extracting iron and coal and transporting it to its steel works to producing steel and steel products ranging from plates to hot and cold rolled coils and different structural shapes. Besides the company’s two steel plants in Coahuila, it also has coal and iron ore mines located both in the state and elsewhere in Mexico, transporting the minerals to its steelworks by rail and by iron pipelines. The company has an annual production rate of 3.5 million tonnes of liquid steel and a total workforce of 19,000 people, including the staff that works in its mining subsidiaries.

Despite years of sustained production and sales growth, in 2012 AHMSA’s net sales decreased slightly from US$3.2 billion to US$3.1 billion (MX$40.8 billion to MX$39.2 billion) compared to 2011. The company attributes this dip to the problems that were faced more widely in the global steel industry, which saw a more than 56 million tonne surplus in steel production in 2012. The company nevertheless broke its liquid steel production record (3,880 million tonnes) and accounted for a fifth of Mexico’s total production in 2012.

Owning its own coal and iron ore mines gives the company a competitive advantage as it reduces exposure to fluctuations in coal and iron ore prices. The company and its subsidiaries invested US$388 million dollars in steel and mining projects in 2012. The new Fénix complex, the construction of which was completed this year, received US$182.5 million (MX$2.3 billion) of this investment. The advanced technology and increased production capacity at Fénix mark the beginning of a new era for AHMSA, since the complex brings the company up to a total annual production capacity of 5 million tonnes of steel, which is an increase of almost one third compared to its previous 3.8 million tonne capacity.