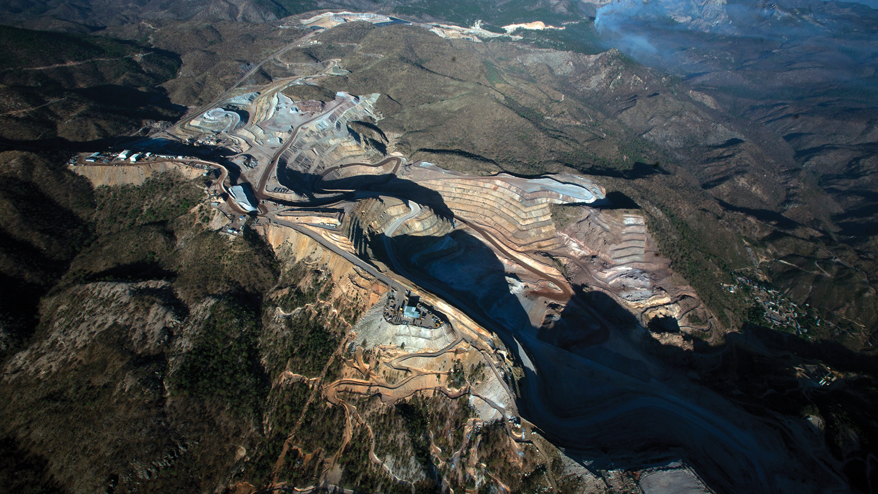 The Mulatos mine is nestled inside the Sierra Madre Occidental mountain range in the east of Sonora, around 220km from Hermosillo and 300km of the US border. Mulatos is a typical openpit, heap leach operation that uses a carbon-in-column circuit to recover gold. The project was originally designed to operate at a 10,000 t/d capacity but, due to a diligent investment strategy carried out by Alamos Gold in recent years, the Mulatos mine currently has a throughput rate of 17,500 t/d. Besides the heap leach operation at the Mulatos site, Alamos Gold also processes high grade ore through a 500 t/d gravity mill. The ore is currently being extracted from the surface high grade zone at Escondida but the ore will eventually be sourced from the underground deposits of San Carlos and Escondida. The company foresees a mine life time of approximately nine years, taking into consideration current proven and probable reserves and the present throughput rates. Alamos Gold employs conventional drill, blast, load, haul operations with mining in the main pit being performed with 9m bench heights. The mine changed from a 6m to a 9m bench in 2012 in order to enhance productivity at the site, but the use of 3m benches is also expected at the Yaqui and Pelon areas to improve selectivity. Finally, Alamos Gold is planning to eventually use long hole open stoping (LHOS) to recover high grade underground ore at Escondida Deep and San Carlos. This operation will be complemented with a modified drift and fill method wherever the thickness of economic mineralization does not allow LHOS. The ore deposits in this district are within a dacitic to rhyodacitic volcanic dome complex and are attributed to epithermal and high-sulfidation occurrences. Most of the gold mineralization is correlated to advance silicic and argillic alterations that materialize close to an upper a rhyodacite porphyry and over volcaniclastic rocks and diacite flows.

The Mulatos Project was acquired by Alamos Gold in February 2001 at a cost of US$10 million. After the completion of feasibilities studies, the company went ahead with the construction of the mine during the third quarter of 2004. The total cost for the mine development was of approximately US$74 million before the company reached commercial production in 2006. The original estimate of 10,000 t/d capacity was increased to 15,000 t/d after Alamos Gold constructed a crusher/conveyor and recovery plant. A series of further expansions and productivity improvements have been performed in the past couple years in order to increase the crusher’s throughput to average an estimated 17,500 t/d which will continue in 2015.