With global financial markets still plagued by uncertainty in 2017, investors are increasingly bullish on gold’s long-term prospects. An exciting pipeline of new projects means Mexico is well-placed to benefit from surging demand

While Mexico is rightly recognized for its dominance in the global silver market, once again topping the global production charts in 2016, the country is also a significant contributor to the world’s gold production. According to Mexico's national statistics agency INEGI, bullion output totaled 4.26 million ounces in 2016, placing Mexico eighth on the list of most productive jurisdictions and second in Latin America behind Peru. Although Mexico’s output was down 1.7 percent on the total the country registered in 2015, the country's mineral wealth, a series of new projects and ambitious brownfield expansion plans suggest that the country could soon establish itself as a powerhouse in the global gold market.

The world’s fourth-largest gold miner by production, Goldcorp, sent shockwaves through the industry when it announced the sale of its Los Filos asset in Guerrero in January 2017 as well as its Camino Rojo exploration project the following June. But the Vancouver-based company has since reaffirmed its full commitment to Mexico and is planning an ambitious exploration program to expand the mine life of its flagship asset, Peñasquito. Meanwhile, after increasing year-on-year gold production by 22 percent in 2016, silver giant Fresnillo confirmed it will invest US$110 million to expand its primary gold asset, La Herradura. The mine produced 520,500 ounces of gold in 2016, usurping Peñasquito as the country’s most productive gold project.

“When we listed on the London Stock Exchange in 2008, our growth plan was to double gold production to 250,000 ounces by 2018,” says Fresnillo CEO Octavio Alvidrez. “We are now aiming to produce 1 million ounces of gold in 2018 – 300 percent more than we had initially targeted – so that reflects the vital role that this commodity has to play for the company.”

The smaller miners are also contributing. Alio Gold, formerly Timmins Gold, will start production at its Ana Paula project in 2018 and Torex Gold, which brought El Limón-Guajes (ELG) online in 2016, is already planning construction at the neighboring Media Luna deposit. Alfredo Phillips, Torex Gold and President of the Guerrero Cluster, believes the state will be crucial in converting Mexico into one of the top jurisdictions for gold mining.

“The company will invest close to another US$600 million by 2020,” says Phillips. “In the next five to 10 years, Guerrero could easily become one of the richest gold regions in Latin America.”

Like many commodities, gold suffered a volatile 2016 as political shifts took their toll. After a strong start to the year – rising 25 percent on the year to US$1,361/oz on June 27 – bullion prices began to fall off in July before a dramatic crash in the build up to, and aftermath of, the US presidential election. Between October 24 and December 25, the price of an ounce of gold fell 13 percent to US$1,133/oz from US$1,304/oz. The “Trump Bump” was more of a “Trump Slump” for precious metal investors.

But in 2017, the story changed. Controversial decisions from President Trump, like the firing of FBI Director James Comey and the decision to pull out of the Paris Agreement on climate change, continued to put pressure on the US dollar, and demand for gold surged. Thanks to extra help from a vital ruling enabling Islamic investors to access the market for the first time, at the end of May gold rose to US$1,267/oz after registering its sixth straight month of growth – its best run since 2010.

With Mexico’s two most productive gold mines ready for long-term production, gold’s return to form is good news for the country. Fresnillo’s La Herradura mine produced 520,366 ounces of gold in 2016, making it the highest producer in the country, and this will only increase with the new investment.

Goldcorp’s Peñasquito fell to second place on the list of gold producers in Mexico with 465,000 ounces output but company Director of Corporate Affairs and Security Michael Harvey says that it will focus on improving its prized asset through an extensive exploration plan and pyrite leach project, which could boost production by 140,000 ounces by 2018. “The exploration work will allow us to extend the life of the mine,” says Harvey.

Mexico’s midsized and junior miners are also getting in on the act. Toronto-based Alamos Gold already has two producing assets in Mexico, at Mulatos and El Chanate, but it plans to at least double that number in the next few years. Production at the La Yaqui development project is expected to start in 3Q17, with construction already under way. The mine will only deliver about 10,000 ounces of gold in the first year, but this number should jump when the neighboring La Yaqui Grande deposit, with its 523,000 measured and indicated resources, moves into production. The company also plans to bring the Cerro Pelon project, a potential 100,000oz/y asset, into production in the next few years.

“We have a further five exploration projects in the district that we will be exploring over the next several years and ultimately looking to develop,” says John McCluskey, President and CEO of Alamos Gold. “Our growth pipeline for Mexico over the next few years is very strong.”

Vancouver-based Alio Gold, which changed its name from Timmins Gold in early 2017, runs the profitable San Francisco mine in Sonora that produced over 100,000 ounces in 2016. But San Francisco is winding down and the company’s main hopes are pinned to the Ana Paula development project in Guerrero. The asset already has proven and probable reserves totaling 13.4 million tons and Alio Gold released a positive Pre-Feasibility study (PFS) in May 2017. The company hopes to start construction in early 2018. “The project is moving along very smoothly,” confirms Arturo Bonillas, former President of Timmins Gold.

Torex Gold’s plans are also fixed on Guerrero. After production began at its flagship ELG asset, the company plans to spend US$5 million on exploration to identify further resources in 2017. Meanwhile construction permit applications for the tunnel at Media Luna have been submitted. The project is still in the early stages but it could produce “far more ounces than El Limon for a longer period of time,” according to Philips.

Guerrero is also home to the Los Filos operation, sold by Goldcorp to Leagold Mining for US$271 million cash and a further US$71 million in common shares. Although seen as a noncore asset by Goldcorp, its new owners will use the project as its platform for growth and will build a new underground operation at the Bermejal deposit.

Despite the strong growth pipeline for gold projects in Mexico, the sector has its challenges. Miners are still coming to terms with the 2014 fiscal reform, which placed a 7.5 percent royalty on all precious metal production, while investors are growing weary of security concerns. In Zacatecas, a controversial Ecological Tax announced by the state government in late 2016 threatened to slash profit margins of mining operations and was slammed by business leaders. The issue is under review by the Supreme Court of the Nation (SCJN).

But these concerns are not enough to dissuade companies to continue ramping up gold targets in Mexico. With the yellow metal set for a strong year in 2017, Mexico’s gold sector could soon rival silver.

“Mining is a highly strategic industry for Mexico that is not as vulnerable as other industries to external political factors,” says Harvey. “Mexico absolutely has what it takes to get back to the level of attractiveness it had just a few years ago.” 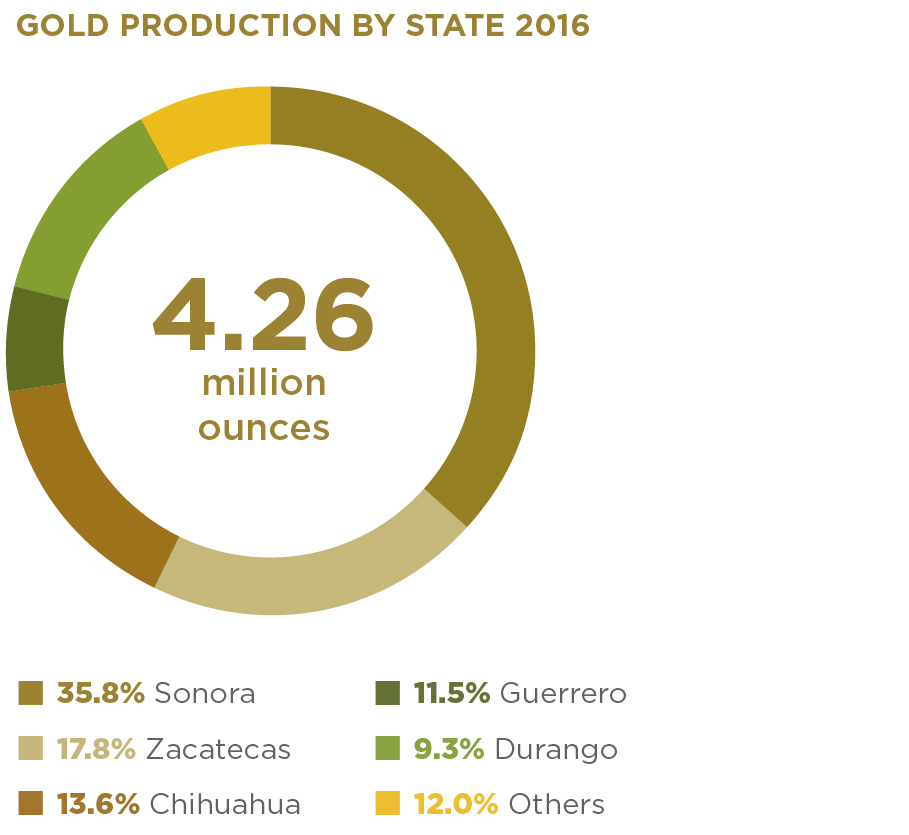 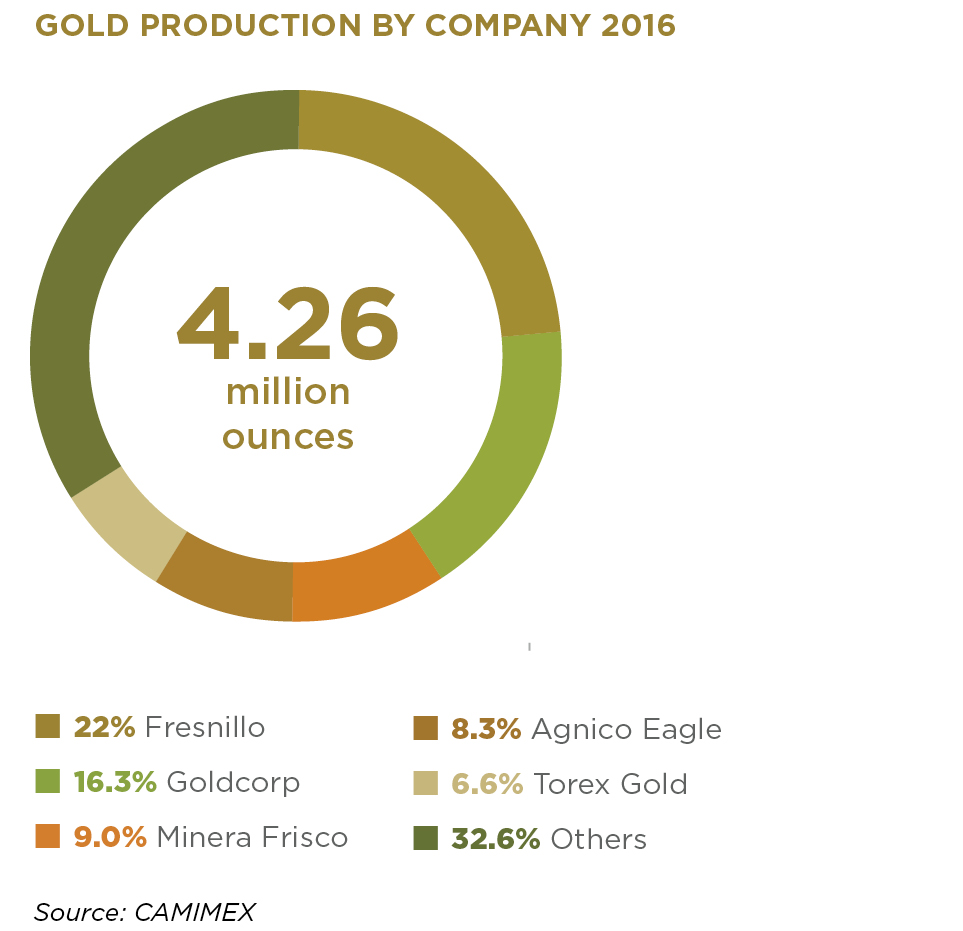