Q: While geological research institutions are becoming smaller in many countries, the Mexican Geological Survey (SGM) is expanding its operational reach. What is driving this change?

A: About five years ago we were doing what any other geological survey would do: improving national cartography, conducting geophysical trials, and doing geochemical mappings, even though Mexico was not getting anything truly worthy out of it. What SGM did was to transform the work that the country had already spent a lot of money on. Geologists have now been trained in such a way that the information they obtain through cartography can also be of economic interest to Mexico.

This experience has added value to our research work as well as serving a double purpose: providing a good basis of scientific knowledge about the country and a database to be used by the private sector in order to promote investment. Today, the Survey is able to transfer projects to the private sector through bidding processes. SGM is doing almost the same as junior companies do, which is to take a finder’s fee and royalties. The positive thing is that through this type of procedure SGM acquires funds to support its programs. As a matter of fact, 68% of SGM’s budget is self-generated.

Q: What are the main changes that SGM has undergone in the last year and how have these changes contributed to its self-improvement?

A: SGM is not cutting down on the number of cartography or exploration programs, on the contrary, the Survey generates more than 50 charts per year. SGM’s data is fully digitalized; traditionally, geologists required printed geological, geophysical, geochemical, and topographic maps, as well as satellite imagery, which is very hard to transport and use in field. To facilitate access to this material for geoscientists we created Mapa Móvil, which contains 22 maps or layers of information and is used by all SGM geologists. When a geologist is running a field survey, he or she has a series of protocols that need to be followed in order to gather specific information such as color, texture, mineral content, rock type, structures, and other classifications. When this information has been collected, the data is immediately digitalized and sent to our database. There is no other geological survey with such an advanced mobile application. In the past four years 13.6% of the Mexican mineral value came from projects generated by SGM.

Q: How do SGM capabilities for processing and displaying geographical information compare with those of the private sector?

A: SGM does not compete with the private sector. SGM is more efficient at exploration than private companies because we have all of the state of the art tools necessary to perform in-depth exploration. Normally, companies need to hire geophysical studies services and will then need to go to a lab to carry out different analyses. Some people believe SGM is competing with junior exploration companies, but we look at exploration from a different perspective. SGM is the best partner any junior mining company in Mexico could have, since it has the basic geological information for the whole nation.

Q: It is often said that Mexico still holds over 70% of unexplored land. Why has SGM not adopted measures to carry out exploration projects that take advantage of this untapped potential?

A: SGM has carried out the mapping of 100% of the country on a scale of 1:250,000. Not many countries have done this. When it comes to geophysics, even less countries have covered their entire territory using aeromagnetic cartography. We have mapped about 34% of the country’s territory on a scale of 1:50,000, which is one of our main focuses. SGM is always looking for potential territories to be transformed into mines. It is not only looking for gold, silver, and copper but also for any other mineral with an economic value, such as phosphorite, base metals, lithium, titanium, and rare earth elements, among many others. SGM has to carefully allocate its budget to ensure that it is used in a way that maximizes value creation for Mexico.

Q: What do you consider to be SGM’s most important strengths and what factors have transformed the organization into what it is today?

A: Technologically speaking, SGM is ahead of many institutions working within mineral exploration. SGM geologists work with epipolar imagery and three- dimensional entries no other geological service does this. It has an airplane with hyperspectral imagery, which is quite spectacular. Usually, geological surveys use satellite imagery with four bands, but our system uses 320 bands, high resolution airborne magnetic-radiometric methods, TEM, Hylogger, electron probe microanalyzer, ground portable spectroradiometers and x-ray fluorescence analyzers, SURPAC geological modeling, open hole geophysical probes, mass spectrometers, and nontripulated aerophoto planes, among others.

In terms of human resources, SGM has doubled its capacity while employing the same number of people. We needed only to enhance the creativity of our staff and to challenge them. A good percentage of geoscientists working at the Survey have over 30 years of experience, so it was just a matter of updating the potential of our employees, individually and as a team. This group of people transformed this institution in a short period of time.

Q: What is the outlook for the Mexican mining industry in the coming years?

A: Mexico is very well positioned in the global mining industry. It will remain the number one producer of silver, but will also become an even more important player in the gold and copper markets. In terms of discoveries Mexico still has a lot to offer, and SGM believes that it will also challenge other producers in the realm of non-metallic resources. In the last two years the silver resources of the country have been increased to more than 550 million ounces and gold resources by more than 4.1 million ounces. 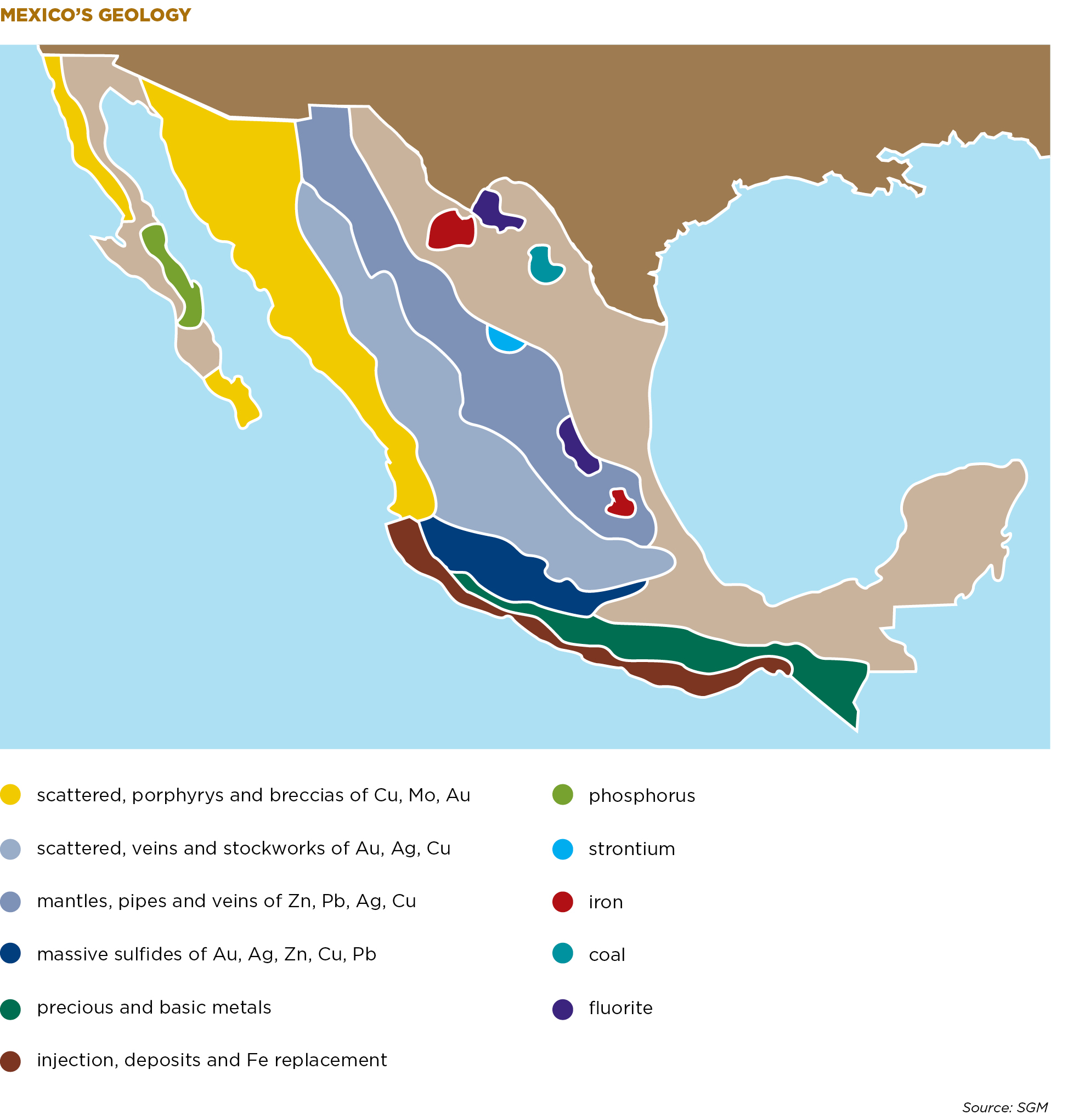