The latest figures representing the performance of Mexico’s mining industry indicate that it has joined the global trend of decreasing revenues and investments. Internal factors such as the introduction of a mining tax and royalty, and external factors such as the drop in global metal benchmark prices have had a negative impact on the principal indicators of the sector. Even so, in the face of these adverse circumstances, the industry generated a total value of US$15.63 billion in 2013, as stated by CAMIMEX. Although this represented a 12.4% drop compared to the US$17.84 billion generated in 2012, it highlights that the Mexican mining industry remains a profitable investment opportunity, and marks the importance of this industry in the country’s overall economy, making up around 4% of the country’s GDP in 2013. This contribution was affected by a decrease in mining investment in 2013, reaching US$6.576 billion invested compared to US$8.043 billion in 2012, which followed a global trend of investor wariness with regard to mining investments. 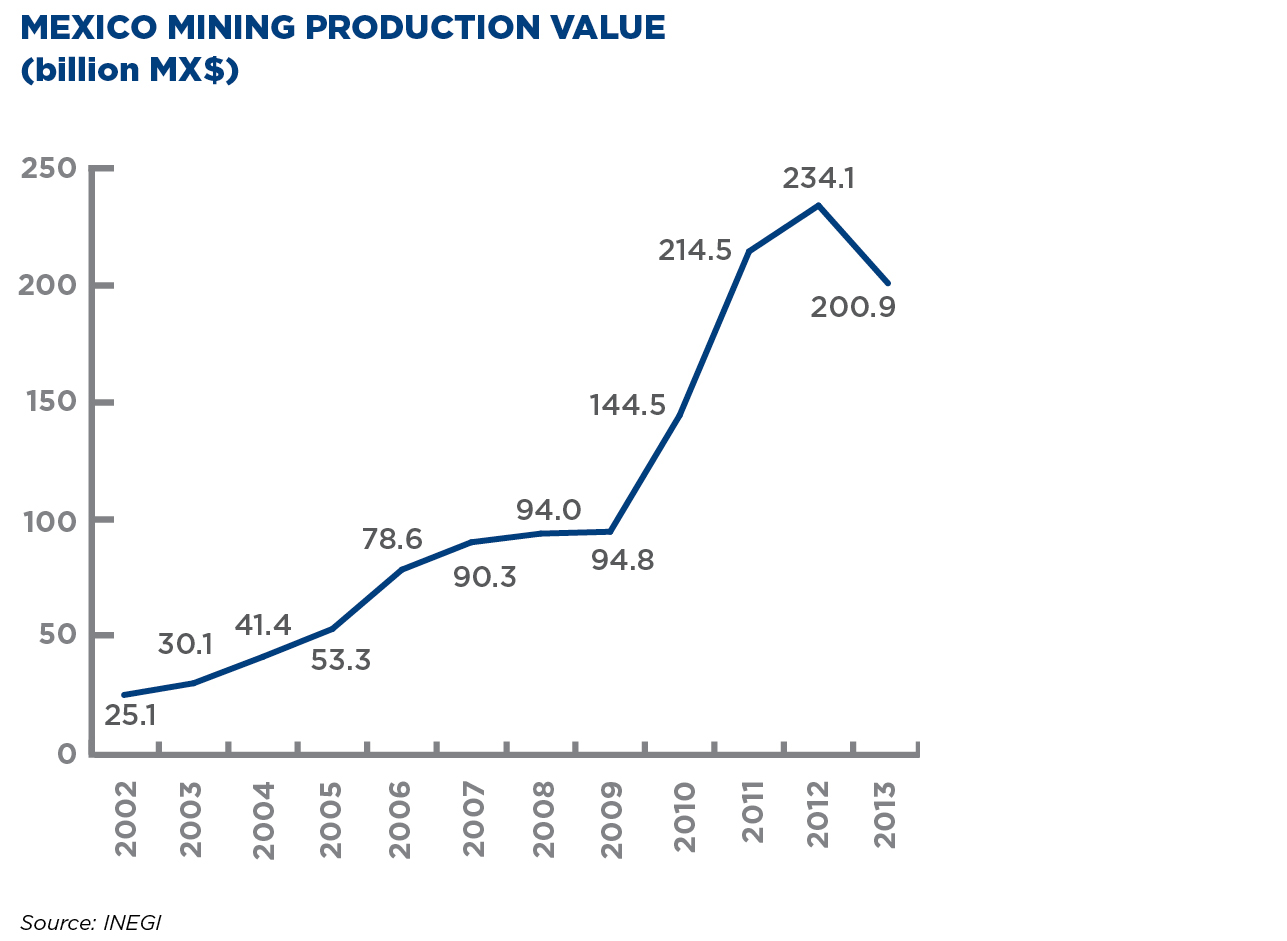 The exploration market has been among the hardest hit in many of the world’s mining jurisdictions. According to SNL Metals & Mining, the total budget for worldwide nonferrous metals exploration decreased from US$21.5 billion in 2012 to US$15.2 billion in 2013, representing a 29% decrease. The total ferrous exploration budget also decreased from US$2.89 billion in 2012 to US$1.74 billion. While increasing metal prices fuelled an increase in global exploration between 2002 and 2008, there were also two steep declines in exploration budgets in 2008 and 2013. These drops were the result of the global financial crisis, a reluctance to invest in the junior sector, and major mining companies cutting their strong exploration budgets as a way to improve their margins. According to CAMIMEX, the estimate for 2014’s exploration investment in Mexico amounts to US$672 million, down from the US$862 million that was spent in 2013. This being said, in 2013, Mexico was still positioned as the fourth largest destination for nonferrous exploration investment with 6% of the world exploration budget being allocated to the country.

95 new mining projects were completed in 2013 worldwide, with a total projected cost of US$38 billion. This is a decrease of 43% compared to 2010, which saw a record high number of 167 new projects, totaling US$115 billion in value. CAMIMEX has also indicated that a drastic cut in capital expenses has combined with the decrease in new projects, meaning that fewer projects are expected to become producing mines in the next five to ten years. Furthermore, 2014 has seen a number of Mexican projects deferred, including Goldcorp’s Camino Rojo, Primero Mining’s Cerro del Gallo, and Coeur Mining’s La Preciosa, among at least ten other projects. The reasons behind these deferrals range from low metal prices to relations with communities, the allocation of resources to other projects, labor issues, and the need to reduce costs. Nonetheless, investment was up in 2014, with mining companies associated with CAMIMEX investing an estimated US$2.39 billion in the development of new projects, an increase from 2013’s US$2.01 billion. Several major mining players launched new projects in 2014, including Agnico Eagle’s La India, Goldgroup’s Cierro Prieto, Great Panther’s San Ignacio, Fresnillo’s Saucito II, and SilverCrest’s Santa Elena mines, among many others low occurred as a result of a strengthening US dollar and a positive attitude in the equity markets that kept investors away from the gold market, which is usually seen as a safe haven. Despite these market challenges, Thomson Reuters has stated that in 2013 and 2014, gold mining companies have been producing the metal at record levels. In 2013, global gold production increased by 6.8% in 2013, reaching a total of 3,054 tonnes.

In Mexico, the main gold production is concentrated in Sonora, Chihuahua, Zacatecas, Durango, and Guerrero. According to INEGI, the average monthly production value for gold in 2014 was US$308 million, slightly lower than the average value for 2013 of US$356 million. Nevertheless, Thomson Reuters reported that gold production in the country increased by 2% year-on-year for the first half of 2014. In 2013, it produced 3.6% of total mine global output of gold, making Mexico the eighth largest gold producing country in the world, with a total production of 119.8 tonnes. 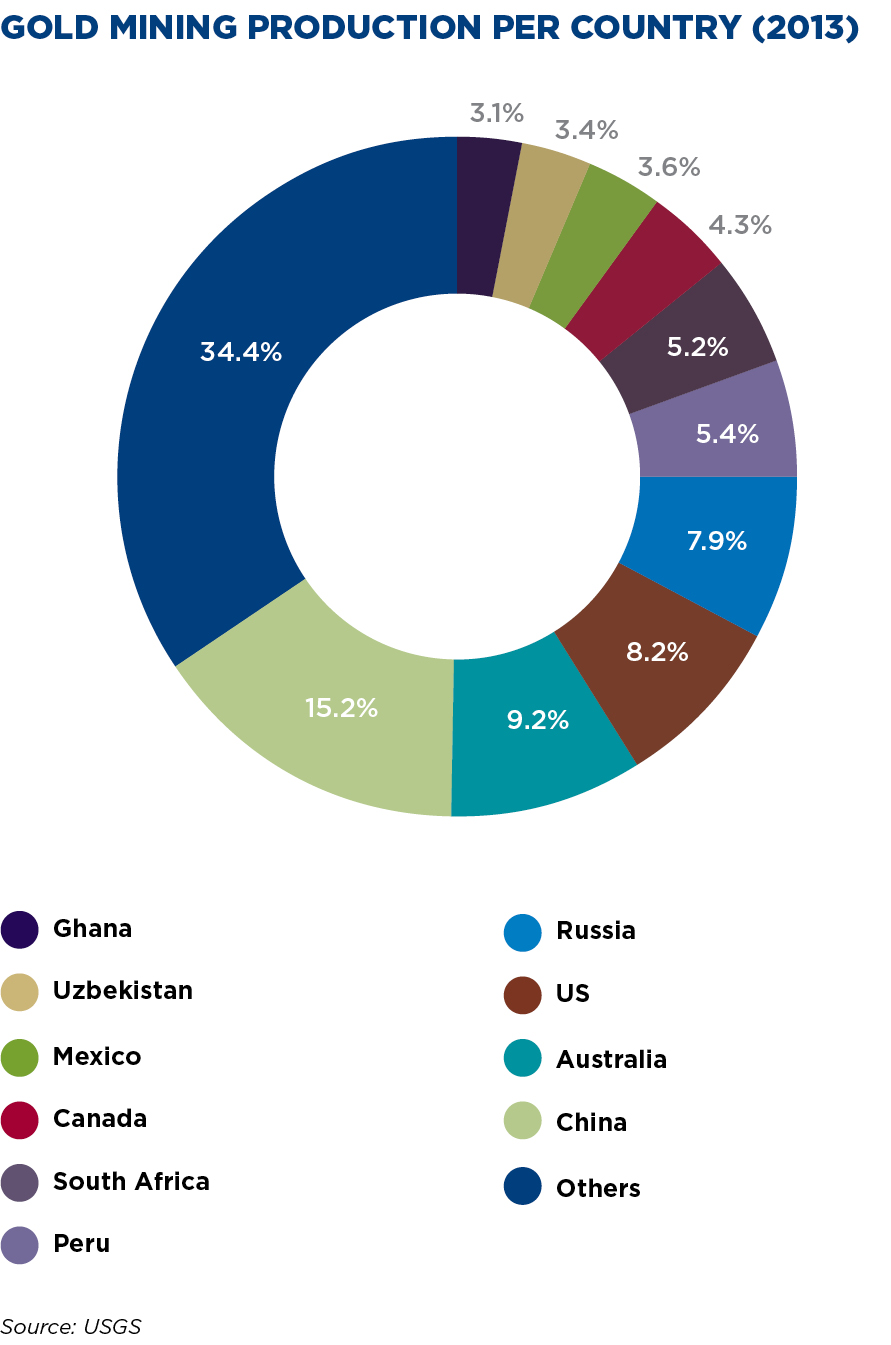 Silver demand reached record levels in 2013 as investors took advantage of lower prices. That same year, the global demand for silver, mostly for industrial application as well as in the manufacturing of jewelry, outpaced supply. The fallout from this was felt in 2014 as the global silver demand fell by 6.7%. Global mine output showed modest gains in 2013, summing up to 819.6 million tonnes of silver but the total supply of silver decreased due to a 24.1% decline in silver scrap supply. Looking at 2015, HSBC predicts that this year will see the first fall in the production of silver after years of steady increases. Furthermore, both the gold and silver markets have been impacted by external factors such as investor fears that the US Federal Reserve would cut its extensive bond-buying, and company-driven initiatives such as the temporary suspension of silver sales in an attempt to maximize future profits. In light of such uncertainty, a survey carried out by PwC reported that 38% of its market participants expect the price of silver to increase in 2015, 31% expect it to remain stable, while 31% expect it to fall further. On a positive note, the London Bullion Market released a new electronic, auction-based mechanism for setting the silver price benchmark. This system replaced the silver pricing method which dated back to the reign of Queen Victoria, in which a few traders agreed on a price between them. The new method makes the silver benchmark price fixing process more transparent and allows more direct participation by a wider range of market participants.

In 2013, Mexico remained the number one producer of silver in the world, with an output of 187.2 million ounces of silver, representing 20.8% of total global production. According to INEGI, the average monthly production value for 2014 stood at US$242 million by Q4, compared to the 2013 average of US$297 million. This continued success is anchored by four of the world’s top ten silver producing companies operating in Mexico, including the global leader, Fresnillo plc. 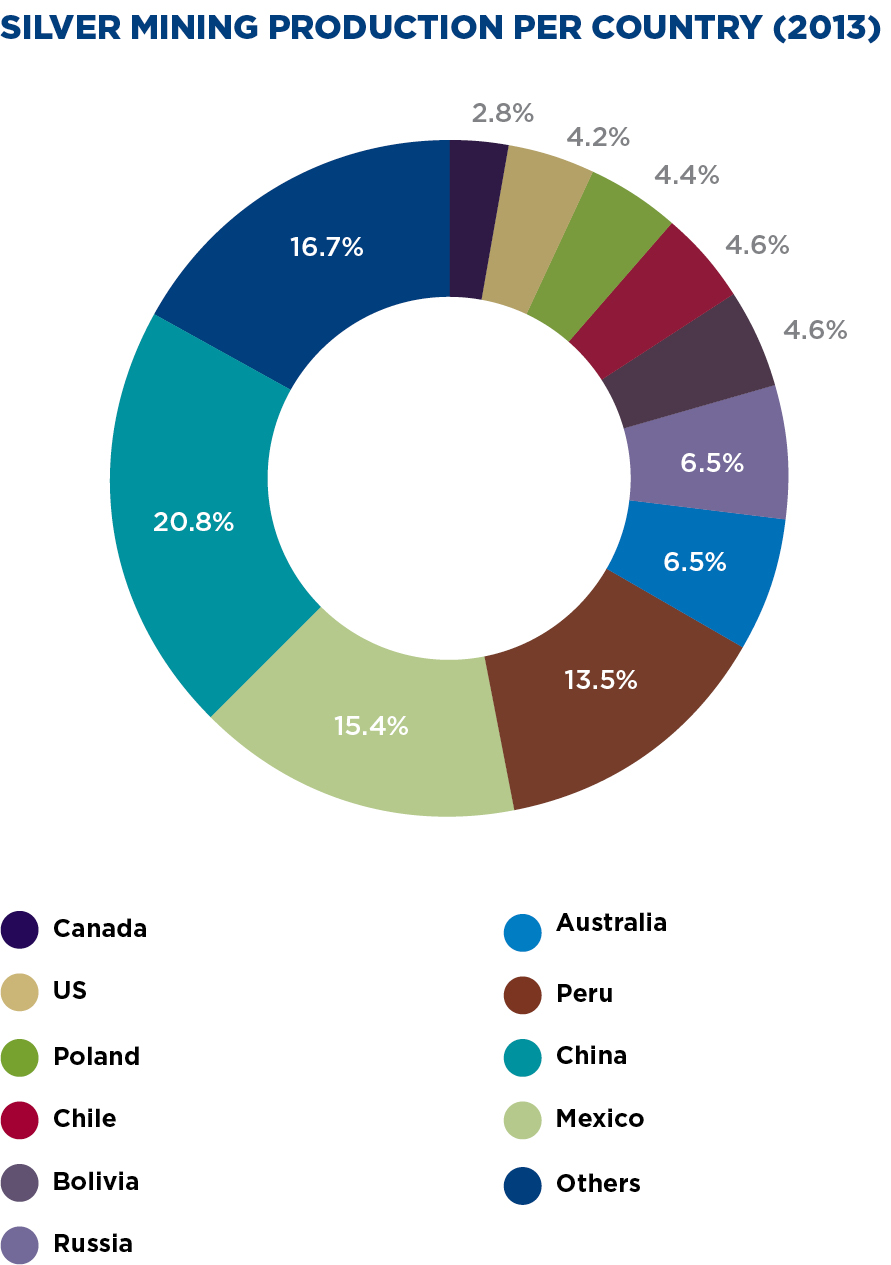 The price of copper recovered relatively fast from its 2009 downfall, reaching historical highs in 2011 due to solid demand. This success resulted in the total refined production of copper reaching a record high of 20.7 million tonnes in 2013, with a forecasted increase to 21.8 million in 2014, according to Thomson Reuters. Copper was mostly used for construction, electrical and electronic products, transportation equipment, consumer and general products, and industrial machinery equipment. However, it is alarming that the marginal production cost levels of around US$6,200 per tonne seen in December 2014 are inching closer to the October to December three-month price range of US$6,321-US$7,340 at which copper has traded on the London Metal Exchange. The GFMS Copper Survey 2014 suggests that copper prices have been weighed on by a recent series of weaker economic data, as well as falling Chinese refined copper imports, and a stronger dollar. There is a positive note for copper producers afraid of these prices digging into their profits: Goldman Sachs believes that marginal production costs could drop to US$5,600 in 2015.

According to INEGI, Mexico’s national copper production decreased by 4% in 2013 to 480,124 tonnes, or 2.7% of global mine copper production. Of the copper produced in the country, 77% came from the state of Sonora, mainly due to the output of Grupo Mexico’s Buenavista del Cobre and La Caridad mines, as well as Cobre del Mayo’s Piedras Verdes, Peñoles’ Milpillas, and Capstone Mining’s Cozamin mine. INEGI figures show an average monthly production value for 2014 of US$256 million by Q4, an increase compared to the 2013 monthly average of US$239 million.

Mexico’s operating environment has seen a number of changes in the first two years of Enrique Peña Nieto’s presidency. The Fiscal Reform, implemented in the early days of 2014, introduced a 7.5% tax on the EBITDA of mining companies and a 0.5% royalty over the net sales of gold, silver, and platinum. Moreover, other relevant changes to the operating environment include an increase to the country’s corporate tax (ISR), an increase of the special tax on production and services (IEPS), the elimination of the immediate deduction of exploration expenses, and an establishment of three additional fees for mining concession holders. Moreover, concession holders that fail to explore or exploit their concessions for two consecutive years during the first 11 years will face a 50% increase in their concession fee per hectare. This can lead to a 100% increase if the property is not explored for two consecutive years after the tenth year of holding the concession.

While the mining industry has been rattled by the double whammy of low metal prices and fiscal changes, there is a measure of optimism for 2015. The passing of the Energy Reform should ease the engagement of mining companies in the energy generation market and lower the currently high cost of energy. Fiscal challenges have also led the traditionally conservative mining industry to show an increased enthusiasm for the incorporation of new technologies. These innovations are primarily focused on improving production, reducing energy consumption, and increasing automation, thus also saving on labor costs. It is said that crisis breeds opportunity, and the mining industry in Mexico seems fully prepared to embrace that ethos. 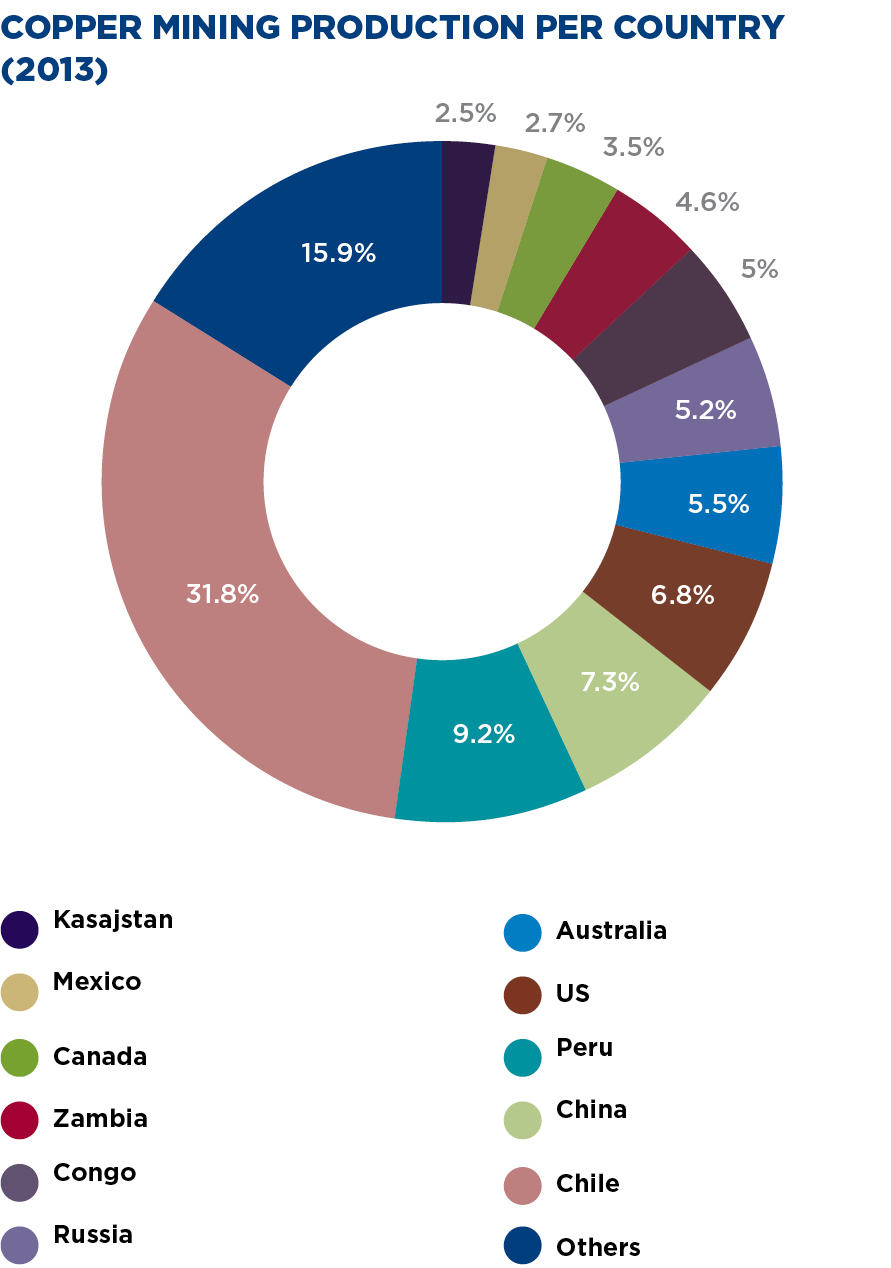