Towing streamers deep reduces sea-state noise and improves low frequencies. However the streamer ghost (the reflection of data back down to the streamer from the sea surface) creates interference, causing a depth-dependent frequency notch in the amplitude spectrum. As the cable is moved deeper, a better low-frequency response is obtained, with a lower noise level, but the ghost notches aect the dominant seismic wavelengths, causing attenuation of the higher frequencies.

BroadSeis, the CGGVeritas broadband marine data solution, uses streamers with varying receiver depth from near to far osets to produce receiver ghost notch diversity, allowing the streamer to be towed deeper to improve the low-frequency signal-tonoise ratio without compromising the high frequencies. This solution capitalizes on the extremely low-noise characteristics and precise low-frequency response of Sercel solid streamers, which are quieter and can be towed deeper than other streamers (over 40m), providing better low frequencies. Using this configuration, combined with advanced proprietary deghosting algorithms, signal is routinely recoverable down to 2.5Hz. The wavelets produced yield a high signal-to-noise ratio and maximum bandwidth, providing the clearest images of the subsurface for any target depth. The variability of the receiver depths, and hence the diversity of the streamer ghost notch, can be tuned for dierent targets so that the notch diversity and output spectra are optimized for each survey. This cable shape is designed according to the water depth, target depth and velocity profile of the survey area.

Up to six octaves of bandwidth can be provided by this solution to produce sharp wavelets with minimal sidelobes, revealing the genuine seismic signature of formation interfaces. This enhances fine detail with increased resolution due to the high-frequency content of the signal and increased depth penetration due to the low frequencies. In mature basins BroadSeis provides significant enhancements for exploring new stratigraphic plays and delineation of subtle structural closures, as well as further enhancing hydrocarbon recovery by providing more detailed information about local facies variations and reservoir compartmentalization.

BroadSeis provides the clearest images and details of the reservoir from its exceptionally sharp and clean wavelets without sidelobes. The broad bandwidths of BroadSeis also enhance imaging below dicult to image geology and provides greater accuracy in seismic inversion from improved low frequencies. The increased dynamic range from six octaves of bandwidth provides rich broadband interpretation of lithology and inferred fluid properties, as well as improved layer dierentiation. The deep tow of the majority of the receivers when using BroadSeis means that the solution is more resilient than other acquisition techniques to weather-related noise, allowing data to be recorded in marginal weather as long as it is operationally safe to do so. Streamers in BroadSeis mode can be towed deeper, to achieve industry-leading noise attenuation. 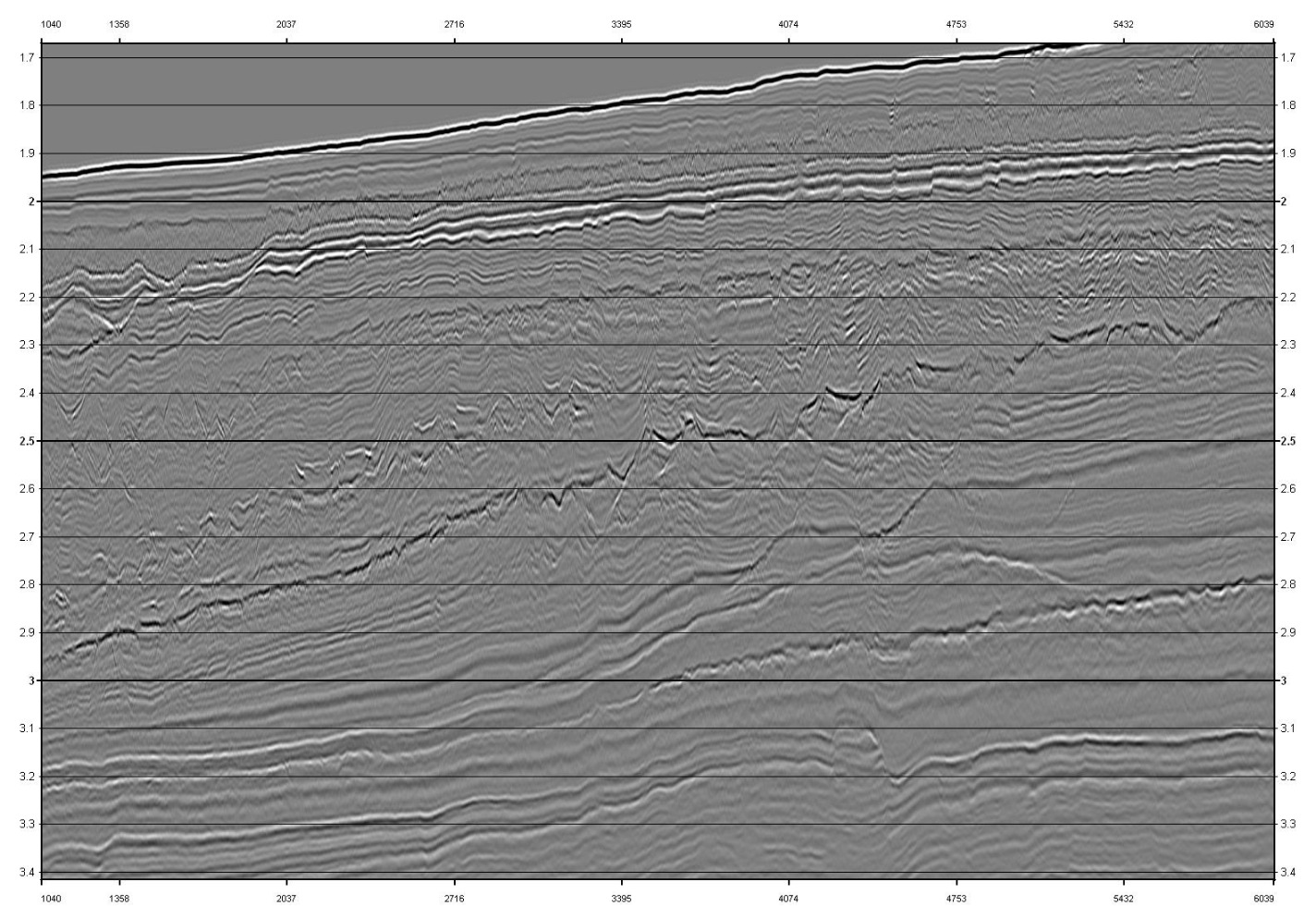 On this conventional dataset from northwest Australia, although the resolution is relatively good, the wavelet sidelobes cause confusion as events are not single peaks or troughs, but tend to appear as triplets. The lack of low frequencies reduces the dynamic range and therefore decreases the standout of individual events. 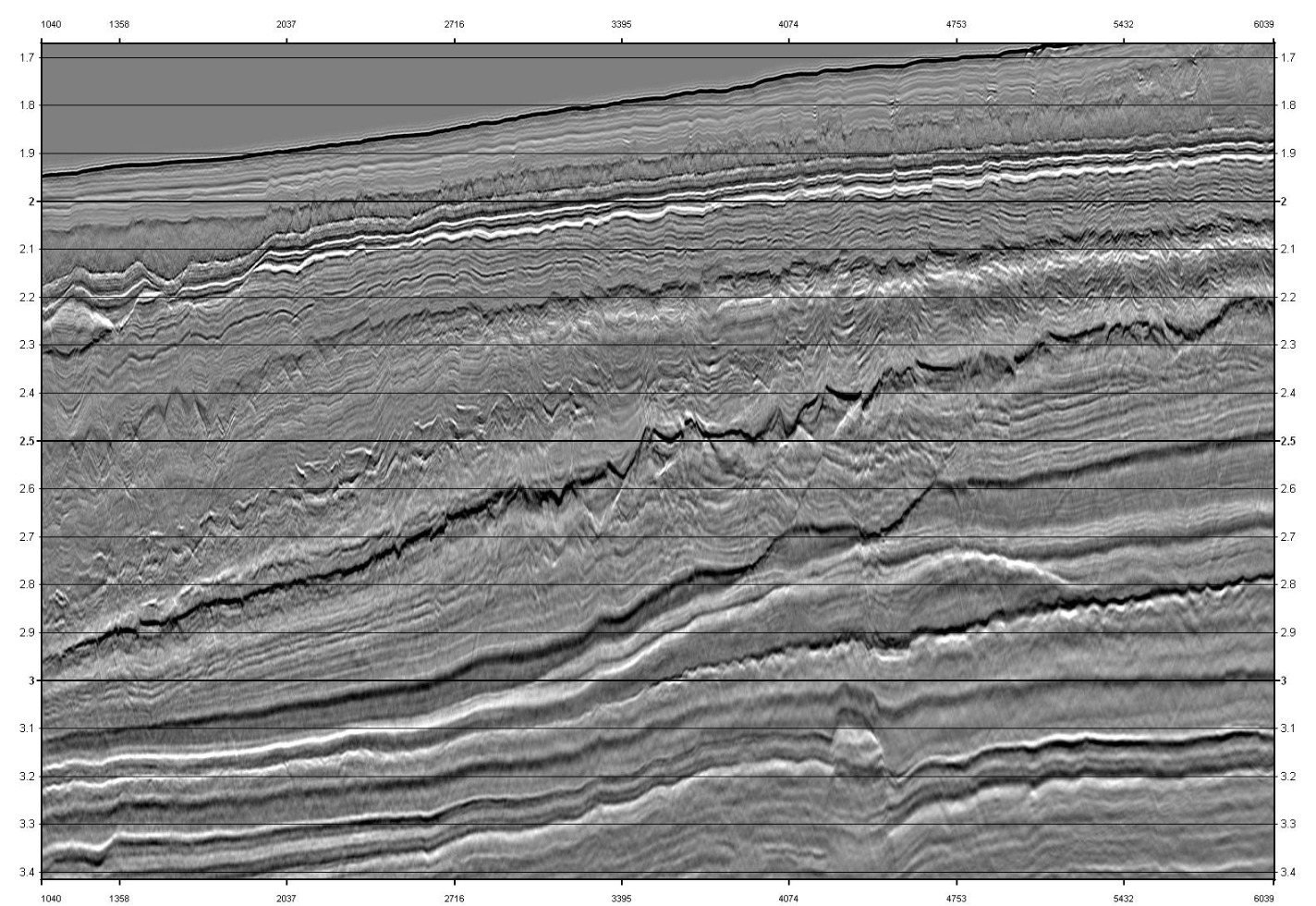