Challenges of the Mexican Refining Industry

The current Mexican government administration has openly stated that the local oil industry, led by PEMEX, the national oil company, will be the key lever to promote the country’s economic development. Specifically, the government is betting on increased local oil production to primarily feed PEMEX refineries to get higher volumes of gasoline, reach self-sufficiency and lower consumer prices.

In recent years, PEMEX played an important role in the government’s revenues, due to high oil production levels, soaring prices and high tax rates on oil production. But this situation is no longer sustainable as PEMEX’s production is falling rapidly, crude oil prices are fluctuating at lower levels and refineries have become obsolete and unproductive. 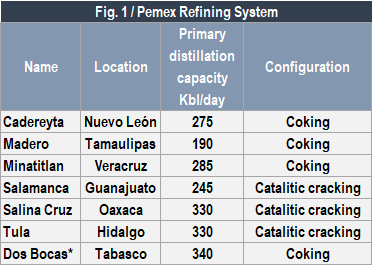 To date, PEMEX is the only local producer of refined products through the existing National Refinery System (NRS), which comprises six refineries with a combined processing capacity of 1.640 million barrels/day. Three of these refineries have catalytic cracking configurations and the other three have incorporated coking processes (Fig 1).

In addition, PEMEX is building a new grassroots 340 Kbl/day refinery at Dos Bocas, Tabasco, to be completed by 2022/2023, that will incorporate a coking unit.

In spite of a global trend toward the use of cleaner fuels, PEEMX aims to increase gasoline production to reduce dependence on imports and reduce/stabilize internal prices. 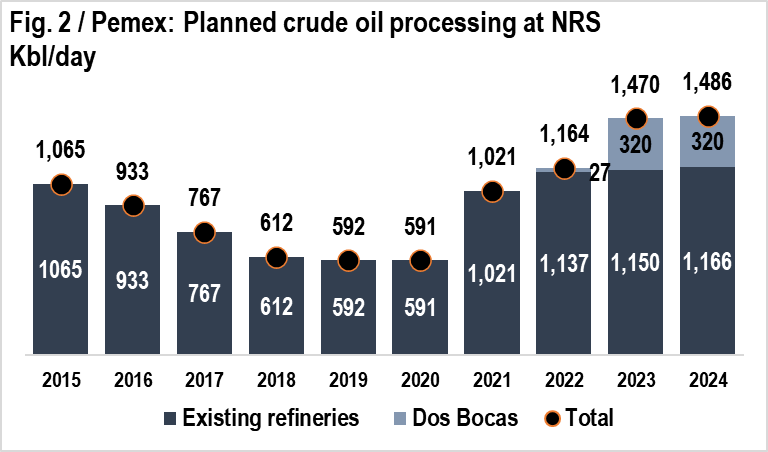 A gasoline market appraisal based on PEMEX assumptions (Fig. 3), shows that by 2024, gasoline production would increase from 185 Kbl/day in 2020 to 664 Kbl/day by 2024. At these production levels, by 2024 PEMEX would maintain an 85 percent market share, cancel direct imports and probably let private traders supply the remaining portion of the market .

However, this hypothetical scenario faces several hurdles that should be addressed. 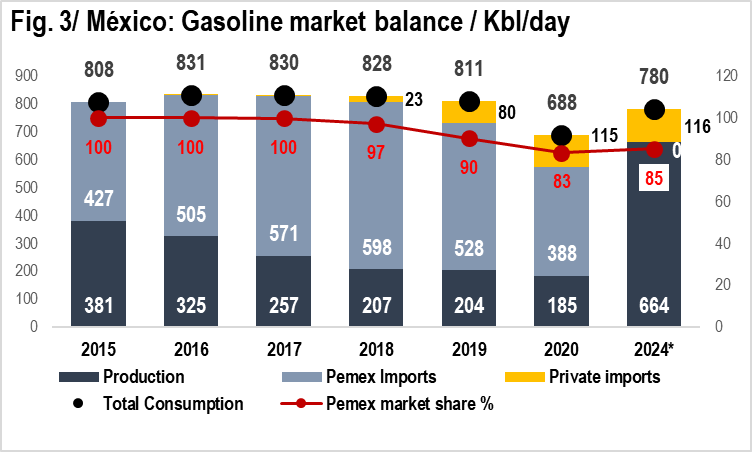 Limited crude oil availability. Since 2004, PEMEX has experienced a steep decline in crude production, owing to the  rapid depletion of the two giant oil fields. Cantarell and Ku-Maloob-Zaap (KMZ) — that once provided more than 70 percent of total PEMEX crude oil output. Although PEMEX E&P CAPEX to foster oil production has surged, it remains stagnant so far, without a clear path for improvement, restricting crude availability for refining, particularly light crude (Fig 4)

Besides limited production, PEMEX crude quality from traditional fields has been deteriorating, both in API gravity and by increasing contents of water, sand, metals and other contaminants. While all major refining companies in the world have several local and foreign crude supply sources, PEMEX’s refining branch relies entirely on domestic crude and does not seems willing to change this policy. 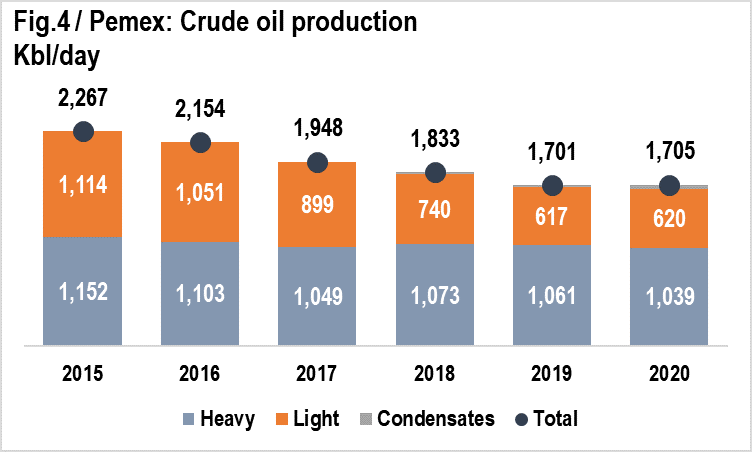 Refinery issues. Over the years, the NRS has been strained by a series of problems affecting production levels, capacity utilization rates and market value of the product mix, which affect its economic performance.

Between 2015 and 2020, annual crude processing at the NRS has decreased 45 percent, reducing the capacity utilization rate from 65 percent to 36 percent (Fig 5). Just as a comparison, the average US refinery utilization rate in 2020 averaged 79 percent.

Another major problem is the low value of the refined products mix, due to the outdated configuration of three of the six refineries in operation (Salamanca, Salina Cruz, and Tula), which run catalytic cracking conversion processes that yield significant volumes of residuals versus distillates (gasoline, diesel, jet fuel).

NRS annual output of distillates for 2015-2020, as a share of total petroleum derivatives production, shows a clear decline, while residual fuel oil share increased from 21 percent in 2015, to 30 percent in 2020, yielding incremental volumes to the market (Fig.6)

the NRS must face the challenging reality that any increase of distillate production will boost the yield of residual fuel oil.

At the same time, due to the rapid conversion of local power generation plants (mainly from CFE, the state-owned electric company) to natural gas flaring instead of fuel oil, the local market for this fuel has shrank, forcing the export of most of its production at low market prices.

High sulfur fuel oil produced by PEMEX (3.5 percent plus content) has experienced a significant price depreciation in the market because of the new International Maritime Organization (IMO) rule that limits sulfur content in ships to a maximum 0.50 percent in most operations around the world. 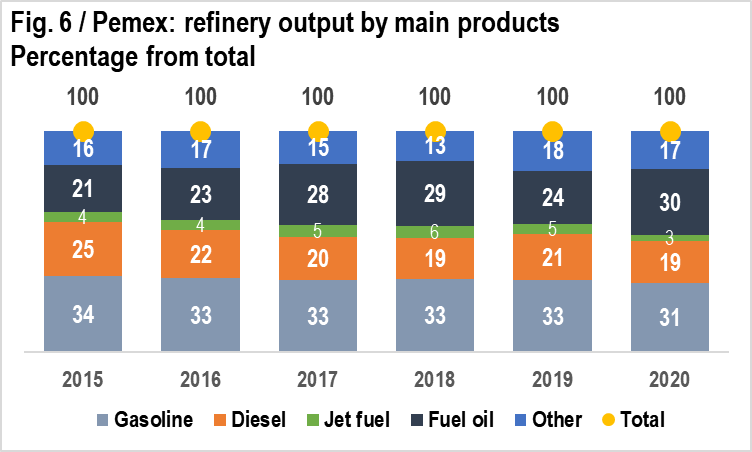 Considering historical yields, if the existing NRS (excluding Dos Bocas) ramps up production, looking to raise gasoline output, 30 percent of the total output will be high sulfur fuel oil, which at present market conditions, will be sold below the crude oil price, turning this business model into an economic failure.

In addition, there are other structural problems that affect the existing NRS, including an aging infrastructure, poor maintenance and operational practices and lack of distillates desulfurization capacity, that cloud the potential of the sector.

For political reasons, it will be difficult for the present government to reverse the commitment to increase PEMEX’s gasoline production, a pledge attached to a nationalistic policy that emphasizes state ownership over Mexico’s natural resources, self-sufficiency and economic growth founded on the oil industry.

However, there could be some medium-term initiatives that might improve the operation of the NRS, namely: 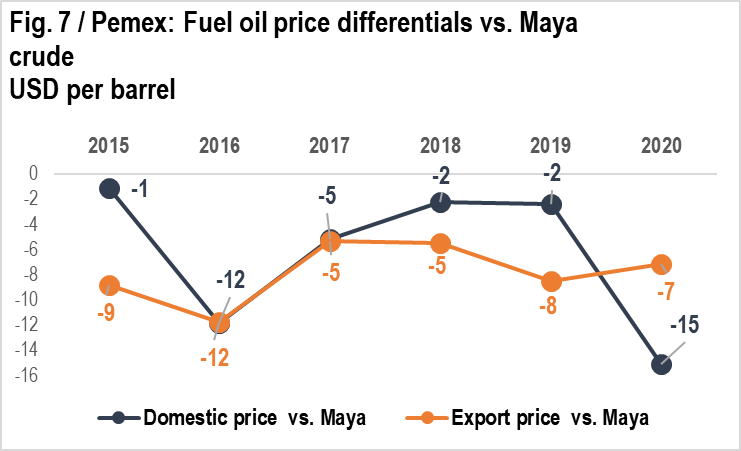