Located in the northern regions of Veracruz and the northeastern regions of Puebla, the Chicontepec paleocanal covers 3,785km2 over 12 dierent municipalities: nine in Veracruz and three in Puebla. The paleocanal is a geological basin located between the southern province of the Tampico-Misantla basin and the western areas of the Tuxpan platform (Faja de Oro), and consists of numerous reservoirs filled with hydrocarbons. Most of these reservoirs were created millions of years ago during the Cenozoic or Tertiary geological age, in the Lower Eocene and Upper Paleocene formations.

Within the boundaries of the region known as Chicontepec, the first commercially successful wells were drilled in 1926, producing small quantities of oil. A major field was discovered in 1973, containing extra-heavy crude that was considered commercially unviable for extraction due to special refining needs. While most of the reserves within Chicontepec have a viscosity lower than 15°API, pockets of light oil and natural gas are also found in the basin.

In addition to being economically and technically challenging due to its unconventional characteristics – low porosity and permeability – the basin’s development also faces social complications because the areas overlapping it are densely populated by the Otomí people, an indigenous ethnic group of the region. Moreover, Veracruz has traditionally been a state that supports leftist ideologies against the opening of the industry to foreign private companies. This manifests itself in the amount of protests and blockages that people from local communities organize to prevent service companies from working properly. 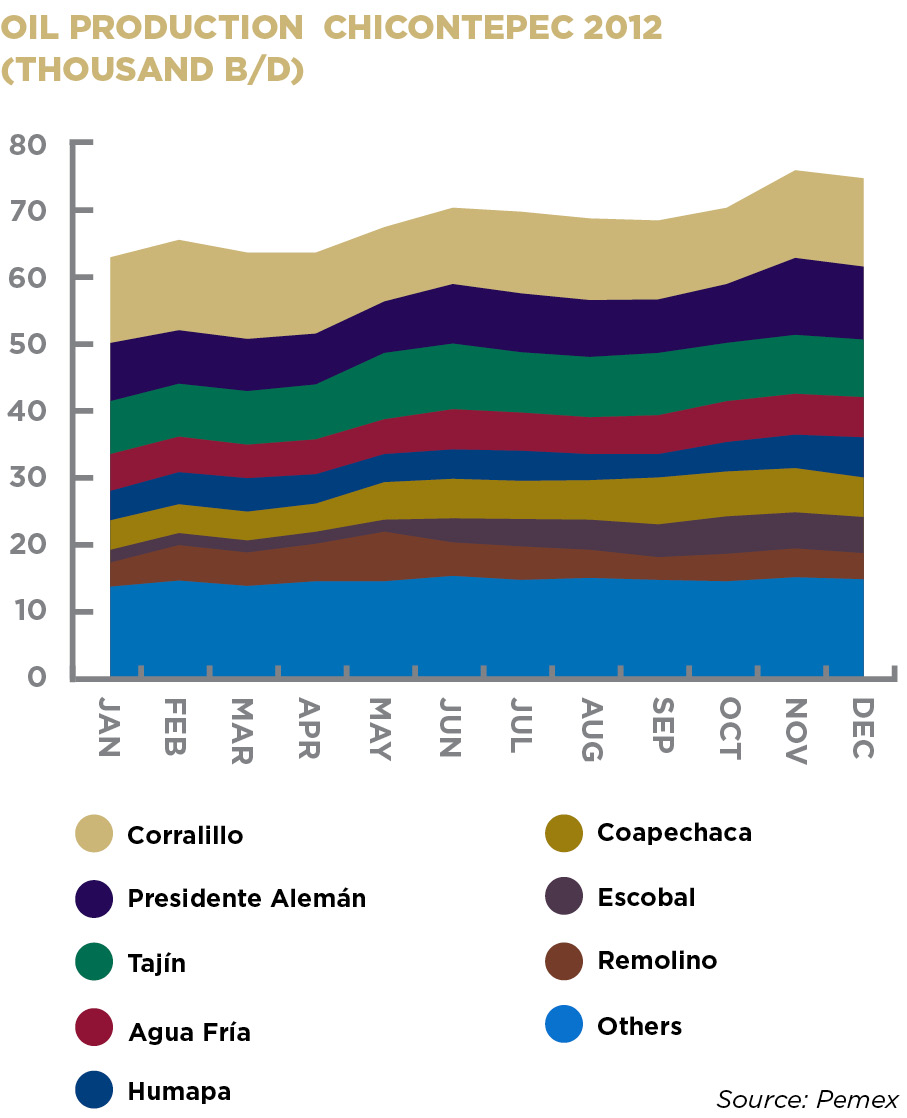 Today, the importance of Chicontepec for Mexico rests in the amount of reserves still left within its geological formations. The asset is believed to hold around 10.95 billion barrels of possible (3P) oil reserves and 28.40 tcf of probable gas reserves. The complexity of the basin lies in converting possible and probable reserves into proved reserves (1P), of which the paleocanal only has 569 million barrels of oil and 881bcf of gas. Oil production in the Chicontepec formation has been steadily increasing since 2009, when it averaged around 30,000 b/d, until 2012, when average production reached around 69,000 b/d.

The field labs at Chicontepec prove that enhancing production is not done through a stationary formula. “The first lesson learned at Chicontepec’s field labs was that the same technology cannot be applied at all the dierent wells across the field,” Hernández García recalls. “The second lesson that we learned is how to increase general productivity. We are identifying which unconventional wells can produce more and drill them to streamline our operation in the basin.” Through the learning experience that Pemex has undergone with the leading service providers in charge of field labs at Chicontepec, the NOC has widened its understanding of the unconventional reservoirs and plays in it. “Pemex is finalizing the learning process of how to produce better at Chicontepec, while implementing technologies to actually yield the results from those educative experiences in hydrocarbons extracted.”

The next step is to integrate this learning into the integrated service contracts (ISCs) that will be awarded at Chicontepec later in 2013. “We are working on ISCs where research institutions, technology providers, and private companies all participate together to find technological solutions from the lab tests, testing the concept, up to the pilot test,” explains Pedro Silva López, Subdirector of Technical Resource Management for Pemex E&P. “We expect these operators to implement new technology solutions for each particular situation and, thus, create an opportunity for us to learn and share experiences with them.”

The team efforts between Pemex and each of the operators assigned to the dierent fields have yielded results already, since most of the production accretion has come through the field labs strategy that Pemex devised for the region back in 2010. Technologies such as directional drilling and multi-stage fracking have proven to be successful in dierent locations throughout the basin. This strategy has also worked to draw Pemex nearer to service companies – and vice versa – and strengthen their relationship as partners: exchanging ideas and technologies and learning throughout the process; with Pemex’s new openness to technologies a key factor in the success of the strategy