Mexico’s deepwater bidding round has been long-awaited, especially given the success seen in US deepwaters and the similarities in geologies in both countries. On Dec. 5, 2016, the first eight deepwater contracts were awarded.

In deepwater ventures, it is not just the water depth that poses a risk. The financial stakes and the environmental and safety challenges are high on the list of factors that can determine a project’s outcome. Mexico’s first deepwater round showed that bigger is sometimes better as the world’s largest IOCs were among the most competitive participants in this round.

Majors like ExxonMobil, Statoil, BP, CNOOC, Petronas, Chevron and Total feature on the list of winners of the eight blocks and will contribute to the US$34.4 billion investment projected over the next 35 years as a result of the round. On the same day, BHP Billiton won the ultra- deepwater Trion farm-out with PEMEX, after tying with BP and subsequently outbidding the British IOC by offering up another US$624 million.

“Our analysts made very good projections during Round 1.4 based on many conversations with the participating IOCs. We also had no doubt that the Trion farm-out would be a success, although we may have underestimated the dimension of the eventual investment,” says Palma Mendez, Mexico Country Manager for Wood Mackenzie.

The eyewatering sums mean Mexico’s entry into the deepwater sector was a veritable milestone for the Energy Reform and the country at large. Encapsulating the main drivers behind Mexico’s historic opening of its oil and gas sector, the deepwater round draws an avalanche of capital, the latest technology and world-class knowledge into the Mexican arena, along with a healthy dose of competition.

The investments are a bet on the prospective crude oil resources resting in the Perdido Fold Belt and Salina basin, with half of the awarded blocks located in each area. Ranging in size from 1,678km2 to 3,287km2, they are predicted to contain varying combinations of light oil, superlight oil and wet gas. The two blocks that did not attract any bids were the only ones to contain heavy oil reserves.

Iván Sandrea, CEO of Sierra Oil & Gas puts his company’s triumph down to its local status. “Specifically, Sierra offered an important source of regional knowledge to the group thanks to our dataset covering over 60,000km2 of 3D seismic, which we believe was one of the decisive factors that allowed us to win Block 5,” he says. Sierra’s win marks the first time a Mexican firm will venture into deepwaters apart from PEMEX, which also won a block in Round 1.4 with Chevron and INPEX.

While local companies will draw on their home-grown expertise as a way to break into Mexico’s emerging deepwater sector, international players are preparing to transfer their own knowledge of subsea operations, and bring the latest technology to Mexican waters.

“Deepwater knowledge is not something that can be purchased,” says José Aguilar, Managing Director, Survey Services for Oceaneering. “Mexico’s deepwater sector has always been part of our master plan,” he adds, highlighting the wider effect of Round 1.4 on the supply chain and revealing it as a catalyst for new technologies pouring into the market.

Although technological innovations will oil Mexico’s transition into more profound operational depths, many challenges lie ahead in other areas. “Deepwater operations are new for Mexico and they carry great challenges in industrial safety and environmental protection,” warns Graciela Álvarez, CEO of NRGI Broker, adding that extra insurance will be necessary to cover the added risk of deepwater ventures.

Round 1.4 and Trion present as many opportunities as they do risks and challenges for the involved operators and Mexico’s oil and gas industry in general. As regulators, operators and the wider supply chain pull together to begin workplans and eventually drill and produce hydrocarbons, the industry waits to witness the birth of what is promising to become a thriving sector in Mexico. 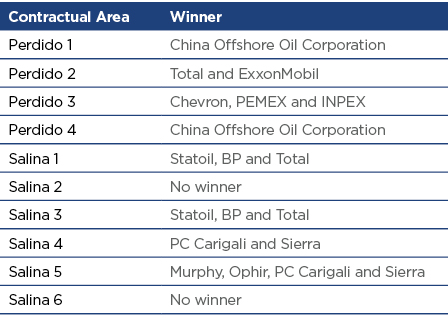