Deepwater expansion is becoming increasingly critical for Pemex; Mexico’s prospective deepwater resources account for 48.45% of the country’s total, an estimated 26.5 billion Boe, according to figures released by Pemex in February 2012. The NOC has been preparing to develop its deepwater resources for over a decade; seeking to replicate deepwater exploratory success and subsequent production on the US side of the Gulf of Mexico. Mexico’s first foray into deepwater exploration began in 2003 with the completion of the Chuktah-201 well at a water depth of 513m, and Nab-1 in 2004 at a depth of 681m. While Chuktah-201 was a dry hole, and Nab-1 had non-commercial quantities of oil, these wells helped Pemex learn the ropes of deepwater exploration.

Since Pemex expanded into deepwater, the company has collected over 45,000km of 2D seismic data on its deepwater reservoirs and over 55,000km2 of 3D seismic data. Today, the company has ramped up this activity and averages between 15,000km2 to 20,000km2 of new 3D data annually using cutting edge techniques such as gravity and magnetics modelling, as well as full wide-azimuth seismic survey, which is particularly useful in gauging pre-salt opportunities.

By the beginning of 2012, Pemex had drilled a total of 20 exploratory wells, eight of which were successful, according to the latest CNH figures. Seven of these wells were gas discoveries, with only one well resulting in an oil discovery. From these discoveries, 470 million Boe of reserves have been incorporated, of which 10 million Boe can be classified as 1P reserves. The bar graph on this page compares the evolution of Pemex’s deepwater drilling activities over the 2006-2011 period with leading oil companies such as Petrobras, Shell, Chevron, BP and Total, and illustrates the company’s rise as an increasingly prominent player in deepwater. 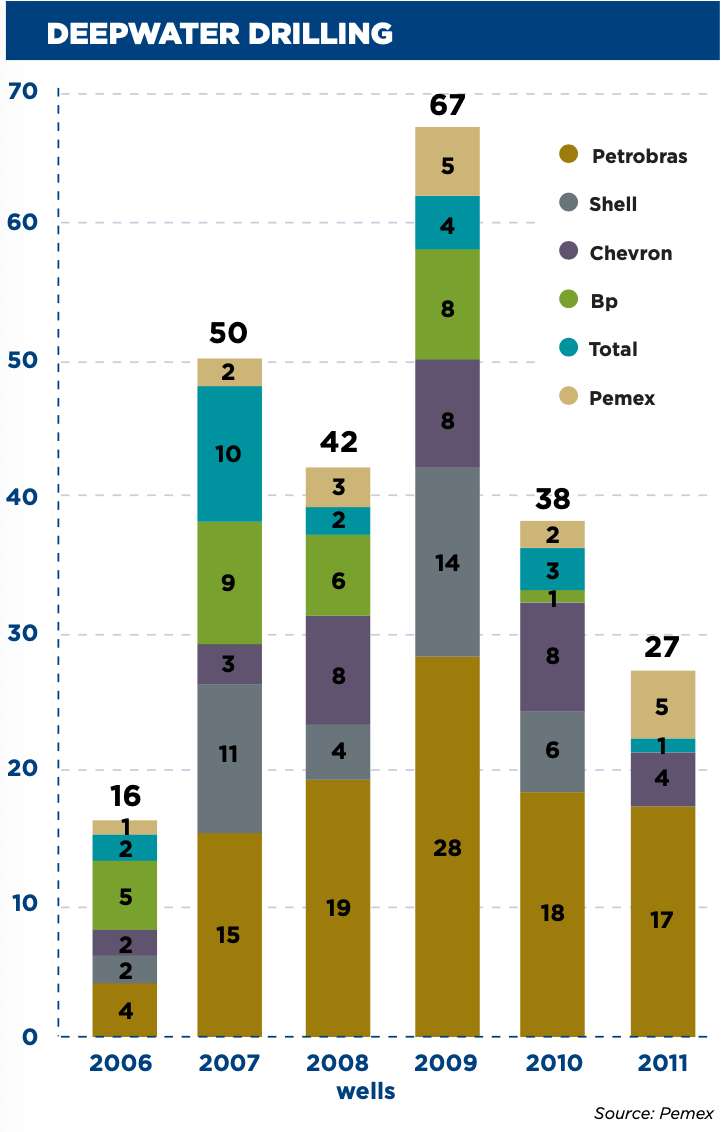 There is a lot of debate about exactly how profitable these deepwater prospects are for Pemex; oil is currently a priority for Pemex and so far no concrete oil discoveries have been made in Mexican deepwater. The exploratory well at Lakach was drilled in 2006, and Pemex expects the gas reserves there could be as large as 1.4 Tcf once the other satellite fields in the region are developed: Ahawbil, Labay, Piklis and Kuyah. The company has also recorded success at Piklis, where 400-600 Bcf of natural gas was discovered in May 2011. The development plan for the Lakach field’s development is already in the pre-FEED stage, for which Pemex awarded the contract to Technip, for subsea infrastructure. Pemex intends to develop subsea infrastructure at Lakach with a 55km tieback to shore, where the gas will be processed in a plant with a 400 Mcf per day. Pemex believes that when Lakach and Piklis are fully developed, they will be able to produce 800 Bcf – a figure that equates to 80% of Mexico’s current gas imports. Pemex plans to invest US$1.52 billion between 2011 and 2015 on the project.

Another promising deepwater prospect is the Lalail field, which is expected to come onstream in 2015 and may be exploited using a floating production platform. The Perdido fold belt is likewise a key deepwater region; Shell is operating a massive project just over the US-Mexico maritime border. Pemex is planning to start drilling its first well at the Perdido field in the first half of 2012.

In 2012, Pemex aims to increase exploration activity and drill six deepwater wells, in addition to the unproductive Talipau-1 well that was completed in January 2012 and the Hux-1 well that is being drilled since August 2011. The deepwater exploration budget for 2012 actually dropped a little from 2011, from MX$14.98 billion (US$1.14 billion) to MX$14.06 billion (US$1.07 billion). Caxa-1 will be drilled at a depth of 1,800m, Yoka-1 at 2,090m, Kunah-1 at 2,154m, Trión-1 at 2,550m, and in ultra-deepwater, Supremus-1 at 2,890m and Maximino-1 at 2,933m. Pemex’s deepwater drilling plan attracted criticism from Mexico’s oil regulator the CNH in early 2012, with Juan Carlos Zepeda Molina, the regulator’s president, saying that neither Pemex nor the CNH were prepared to deal with the consequences of an ultra- deepwater oil disaster. The regulator is worried that Pemex is moving too quickly with its deepwater development, with the danger that it is unprepared and inexperienced in dealing with conditions at these depths.

The company will employ four deepwater drilling rigs: Petrorig III and Bicentenario, owned by Mexico’s Grupo R; Pegasus, owned by Seadrill, and Centenario, owned by Gremsa. The aim is to focus on searching for oil deposits, and the company hopes these rigs will finally turn up the vast oil reseves Pemex believes the region possesses.

In order for its production campaign to be successful, Pemex will not only need to increase its deepwater expenditure, but also attract the proven technology and expertise of foreign partners, which it hopes to do through a new round of integrated service contracts in 2012. Pemex lacks experience in many aspects of deepwater development and production, including drilling and design, installation and maintenance of deepwater production systems. Through agreements with international companies such as Shell, BP and Petrobras, and moves such as the acquisition of a larger stake of Repsol in September 2011, Pemex is already trying to bring this expertise into its organisation. Successful partnerships with deepwater-focused companies will be key if Pemex wishes to fully capitalize on its deepwater resources.