The Kinbe-1 exploratory well helped Pemex discover a new oil field of light crude (37° API) located 87km of Ciudad del Carmen at a water depth of 22m. Drilling started in May 2010, and concluded in August 2011. According to Pemex figures from February 2012, Kinbe-1 provided initial production of 5,679 bbl/day.

The second and fourth largest discoveries of 2011 were respectively made at the Xanab-101 well with an initial light crude production of 3,786 bbl/day and at the Hokchi -101 well that had an initial heavy crude production of 2,453 bbl/day. Both are located in Integral Asset Litoral de Tabasco and together with the Kinbe-1 discovery in the same region, they demonstrate that Litoral de Tabasco, which already represents 10.8% of the overall crude production in Mexico as of January 1st 2012, is becoming an increasingly important asset for Pemex. In the southern region, Pemex discovered the onshore Pareto field, which had an initial production of about 4,000 bbl/day light crude (43° API). This onshore field is located in the Bellota-Jujo area, in the state of Tabasco, around 10km from Comalcalco.

A shale gas field was discovered through the onshore Emergente-1 well at the Integral Asset Burgos. According to Pemex, this was the first commercial discovery of shale gas, and added 112 Bcf of natural gas to the NOC’s 3P reserves. Exploration continues at the site with the drilling of three more wells: Montañes-1, Nómada-1 and Percutor-1.

In May 2011, Pemex announced the Piklis discovery in the deepwater Gulf of Mexico. Pemex drilled the Piklis-1 well 138km o the coast of Veracruz, northwest of Coatzacoalcos, with the semi-submersible Centenario drilling platform. Reaching a water depth of 1.93km and a total drilling depth of 5.43km, this well set Mexican records for both water depth and drilling depth. In May 2011, preliminary estimates based on initial tests put reserves at 400-600 Bcf of gas and condensate. This discovery confirmed, according to Pemex, the great potential for hydrocarbons in the geological area of the Cordilleras Mexicanas in Mexican deepwater territory.

In January 2012, Pemex announced that it had found proof of hydrocarbons o the coast of Veracruz. The Puskon-1 exploratory well, drilled to a total depth of 7,632m, in a water depth of 647m, turned up wet gas at a depth of 7,200m in an environment characterized by higher pressure and temperatures than expected. Pemex subsequently said it was studying the discovery’s structural-stratigraphic characteristics to determine its distribution and potential.

In previous years, the NOC also made major discoveries that boosted 3P reserves. The three most important discoveries between 2006 and 2011 in terms of 3P reserves quantity are the Tsimin field (1.1 billion Boe) and the Xux field (836 million Boe), both of which contain light crude, as well as the Ayatsil field, with 596.1 million Boe of heavy crude. Based on Pemex’s 3P reserves and production rates at the end of 2011, the company’s reserves equal 32.3 years of current production. The combination of new discoveries, improvements in development, revisions and delineations, and the gradually declining production level enabled Pemex to increase both its 1P and 3P reserves significantly between 2007 and 2012. The restructuring of Pemex E&P, and the creation of a dedicated exploration division with a national focus, now has to prove that new discoveries and reservoir management can continue to deliver reserve replacement targets while production returns to an upward trend. 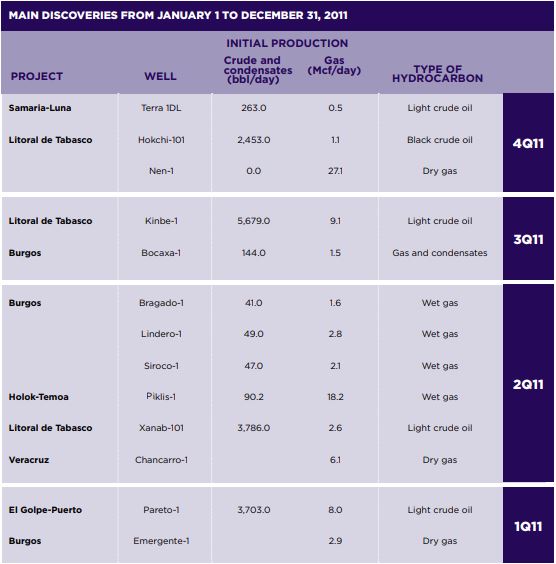