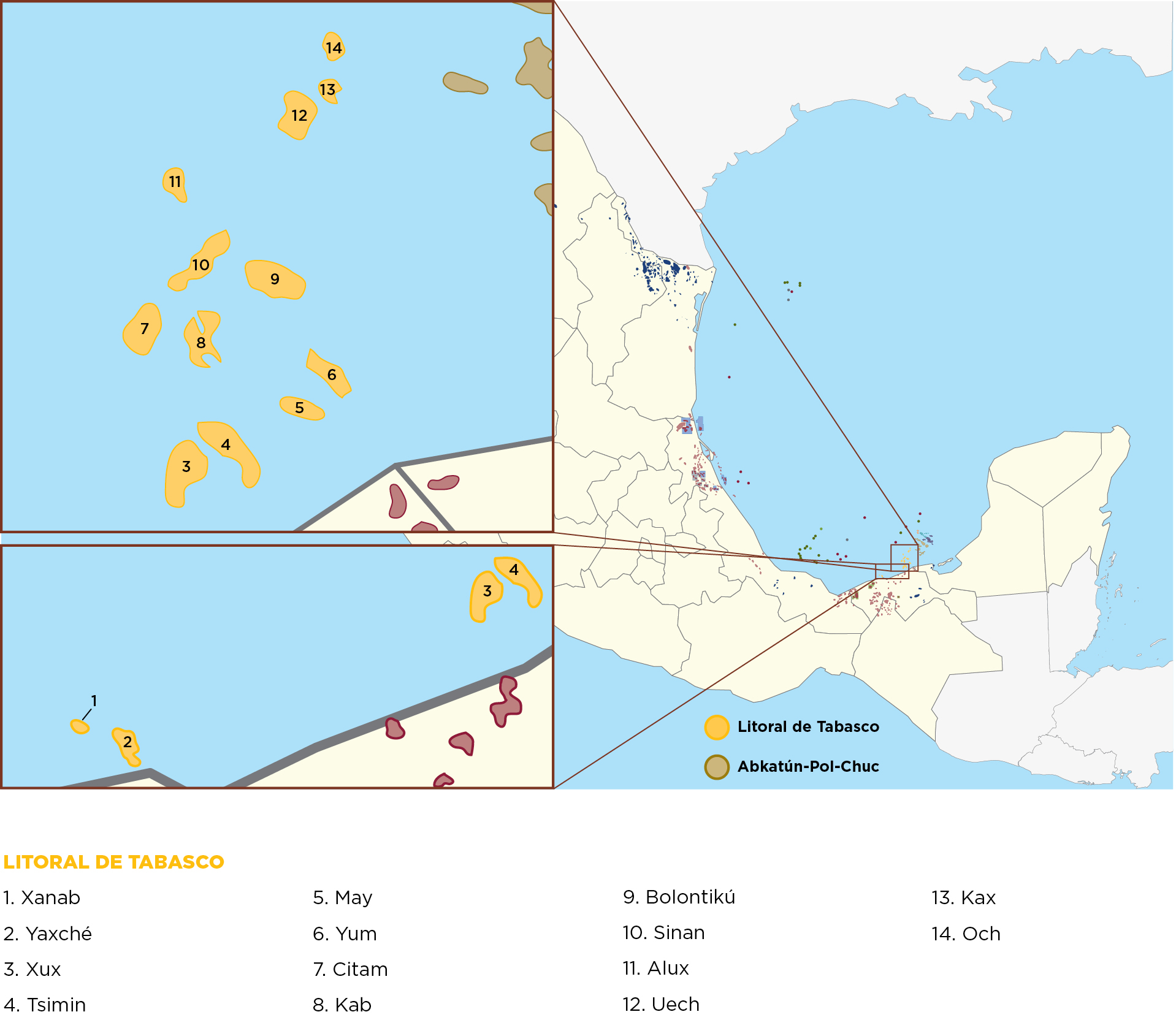 Litoral de Tabasco covers an estimated area of 7,400km2 and is located in the southwestern portion of the Bay of Campeche. In geological terms, the Litoral de Tabasco’s main reservoirs are made up of Early Cretaceous limestone and a Late Cretaceous carbonate breccia. These formations have structural traps that contain light to super light oil ranging 30° to 51°API as well as natural gas and condensate. Litoral de Tabasco’s 1P reserves as of January 2014 are 1.41 billion boe, representing 10.52% of the country’s total proven reserves consisting of 769.08 million barrels of oil, 13.81 million barrels of condensate, and 3.22tcf of natural gas. The project also comprises 17.21% of the total offshore proven reserves and 65.22% of 1P reserves in the Southwest Marine Region.

Litoral de Tabasco has come a long way since 1995 when it generated less than 5,000b/d and 5mcf/d. The huge boost in its production came from the addition of the Och-Uech-Kax project, which raised its total oil output to around 78,000b/d and its natural gas production to just above 184mcf/d in just two years. Additionally, PEMEX added three new projects to Litoral de Tabasco in 2002: Crudo Ligero Marino, Yaxché, and Ayin-Alux. The inclusion of these blocks further increased production to record highs of 120,000b/d and 265mcf/d. This paved the way for further exploration efforts that yielded the discovery of May, Bolontiku, Tsimin, Xux, Kab, and Yum, making Litoral de Tabasco PEMEX’s third most productive asset by 2013. The maximum water depth of the offshore platforms is 35m and the complex consists of 11 producing fields, with Xanab being its most prolific oil producer, yielding 22% of Litoral de Tabasco production at 66,060b/d. Currently, Litoral of Tabasco produces 299,269b/d, accounting for roughly 50.48% of PEMEX’s total oil production in the Southwest Marine Region and 16% of its total offshore oil production. Litoral de Tabasco represents 56% of the total gas production in the Southwest Marine Region and around 27% of PEMEX’s total offshore gas production, with May being the main producer of natural gas and condensates in the complex at 301.07mcf/d.

The most important aspect of the complex’s reservoir characteristics is that due to its low water content wells can reach a high level of production while keeping a low average ratio of oil to gas production. Therefore, Litoral de Tabasco has become a lucrative asset in which PEMEX has invested en masse. More recently, PEMEX awarded McDermott a US$230 million contract for the PB-Litoral-A production platform in the complex’s Tximin-Xux fields during 2013. The PB-Litoral-A project’s scope includes front end engineering design, detailed engineering, procurement, fabrication, load-out, sea fastening, transport, installation, hook-up, commissioning, and start-up of an eight-legged 1,800-tonne jacket, 4,500-tonne topsides and 2,000 tonnes of tripods, bridges and piles. McDermott also aims to provide training to PEMEX personnel for the operation and maintenance of the facility once it is commissioned. In addition to the PB-Litoral-A project, McDermott will also be in charge of brownfield work on the CA-Litoral-A HP compression platform. Full project completion is expected during the second quarter of 2015.

Tsimin-Xux is one of PEMEX E&P’s most important offshore discoveries, covering almost 50km2. The Tsimin field is located approximately 62km northeast from the maritime terminal in Dos Bocas at a depth of 14m, while Xux stands 55km in the same direction at an equal depth. Geologically, both fields are located in the Reforma-Akal Horst, where Tsimin has two hydrocarbon-bearing formations; one reservoir being a Late Jurassic gas and condensate and the other a Cretaceous light oil one. Conversely, Xux has only one Late Jurassic gas and condensate reservoir which is still in the process of being delineated. Xux holds 836 million boe of 3P reserves as well as 112.5 million boe of 1P reserves, according to January 2014 figures, accounting for 7.95% of the total proven reserves in Litoral de Tabasco. The first well in Tsimin was drilled in 2009 and yielded its first production of light crude oil in July 2012. More significantly, Tsimin held an estimated 1.9 billion boe in 3P reserves in 2013 and 498.07 million boe of 1P reserves as of January 2014, translating to 35.21% of Litoral de Tabasco’s total proven reserves. In total, Tsimin-Xux has 43.17% of Litoral de Tabasco’s 1P reserves in 610.57 million boe: 278.18 million barrels of oil, 9.76 million barrels of condensate, and 1.64tcf of natural gas, of which 1.1tcf is dry gas.

With the relatively recent start of exploitation activities in Tsimin, PEMEX expects to yield around 300,000b/d from the complex by 2016. A key advantage is that Tsimin contains light crude oil, which can help PEMEX increase the volume of heavy and extra-heavy oil it currently produces by blending this light oil with the heavier oil in order to generate the necessary API degree for the Maya mix. The development strategy for the Tsimin-Xux complex consists of 63 exploratory wells, 73 geological studies, and the acquisition of 2,318km2 of seismic information. Additionally, there is a current program to obtain information from vertical wells in the field to allow for a better seismic interpretation of the recently acquired Tsimin-Tojual 3D data and thus delineate the salt bodies present in the region. All of these strategies are part of a plan that the company hopes will maximize production in the shortest possible time span.

After confirming 239.3 million barrels of 1P reserves during August 2011, it only took one year for PEMEX to get early production in the field started. PEMEX has already begun delineating Xux and expectations are rife that this field will become one of its new giants. Additional challenges and targets that PEMEX would like to attain are related to the development of gas and condensate reservoirs and maximizing recovery. Even though PEMEX has already begun production at Tsimin, Xux still holds a lot of potential for the oil giant’s development division. Xux is one of the most relevant discoveries of non-associated natural gas that could aid in fulfilling the national gas demand. Due to this field’s nature, it has been included as a priority and regarded as a substantial reservoir in PEMEX’s Strategic Natural Gas Program. Long-term plans for Tsimin-Xux involve linking its infrastructure with current production infrastructure at Litoral de Tabasco. Besides the platformto-shore pipeline infrastructure, McDermott’s current PBLitoral-A project at the Litoral de Tabasco complex will play a crucial role in this development strategy, which is expected to be finished by 2015. Tsimin-Xux is expected to become a major light crude producer by the same year