In 2011 oil prices remained volatile, mainly as a result of geopolitical risk in various oil producing countries in North Africa and the Middle East, as well as uncertainty about the global economic growth and the recovery of the US and the European economies. Throughout the year, increasing global demand largely driven by emerging economies resulted in a rise in the crude oil price that pushed the average price of the Mexican crude oil basket above US$100 per barrel for the year. Gas prices continued to be exposed to the downward trend in North America, following increased supply in the United States and Canada.

It is worth noting that the average exchange rate for the year was lower than in the previous year. The drop from 12.35 MX$/ US$ to 13.99 MX$/US$ in the second half of 2011, aected the annual financial results of Pemex. (Refer to the article on page 31 for more information on the impact of the exchange rate on the financial performance of Pemex in 2011.)

Pemex’s revenue from sales and services increased from MX$1.28 trillion (US$100 billion) in 2010 to MX$1.56 trillion (US$120 billion) in 2011. This 21.6% increase (see table on page 31) was the result of stable crude oil production at 2.55 million bbl/day combined with an increase in the crude oil price. The increase in revenue from sales was partially due to the higher prices and an increase in sales volume in the Mexican market, which resulted in a revenue growth of MX$95.3 billion (US$7.29 billion). On the other hand, export sales were the primary driver revenue growth and showed an increase of 30.4%, which resulted in an increase in revenue of MX$180.1 billion (US$13.7 billion). This was the result of a 39.9% increase in the price of the Mexican crude oil basket from US$72.1 in 2010 to US$100.9 in 2011, while the eect was partially oset by a decrease of 1.7% in the volume of exports which averaged 1.33 million bbl/day.

Total operating income for 2011 increased by 24.3% as a result of both the revenue increase and a decrease in general expenses of 7.6% due to a decrease in distribution and administration expenses of 5.8% and 4.8% respectively. Earnings before interest, taxes, depreciation, and amortization (EBITDA), which reflects the company’s cash flow generation capacity, grew to MX$1.08 trillion (US$80 billion) and confirmed that Pemex’s cash-flow could support the levels of investment required to pursue the company’s stated objective of returning oil production to 3 million bbl/ day provided that its heavy tax burden is reduced. Over 2011, Pemex experienced a decrease of 1.8% in amortization costs and 10.4% in the net cost of employee benefits.

Pemex’s 2011 trade balance for refined products reported a deficit increase of US$7.62 billion compared with the previous year. In 2011, Pemex exported 184,800 bbl/day of refined products with a total value of US$6.21 billion, while importing US$29.40 billion of refined product primarily to meet Mexico’s gasoline and fuel oil demand, resulting in a trade deficit of US$23.19 billion. Pemex’s overall trade balance for 2011 showed a surplus of US$24.996 billion based on total exports including crude oil reaching US$55.796 billion while spending on imports equalled US$30.801 billion.

Pemex has the mandate to contribute to Mexico’s public finances. In 2011, its contribution to the federal budget hit a record high of MX$876 billion (US$67.03 billion) (see graph below), substantially exceeding the contribution of MX$771 billion (US$58.99 billion) made in 2008. This 33.9% increase over the previous year, was primarily driven by the upward trend in the global crude oil price. Tax reforms in recent years have only had a limited impact on Pemex’s ability to retain cash for investment.

Despite increases in revenue and operating profit, Pemex registered an overall loss of MX$91.5 billion (US$7 billion), caused by both an exchange loss of MX$79 billion (US$6.04 billion) compared with 2010, resulting from the depreciation of the peso, as well as a higher tax burden. 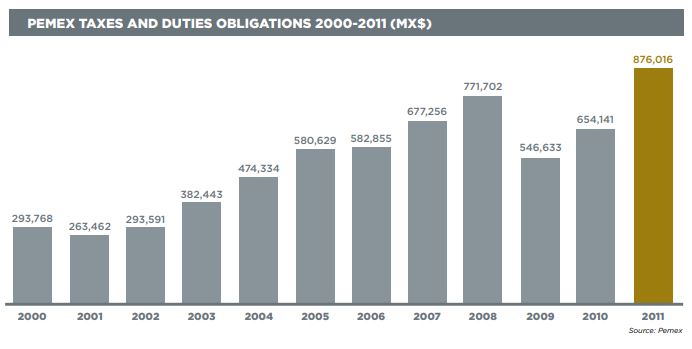 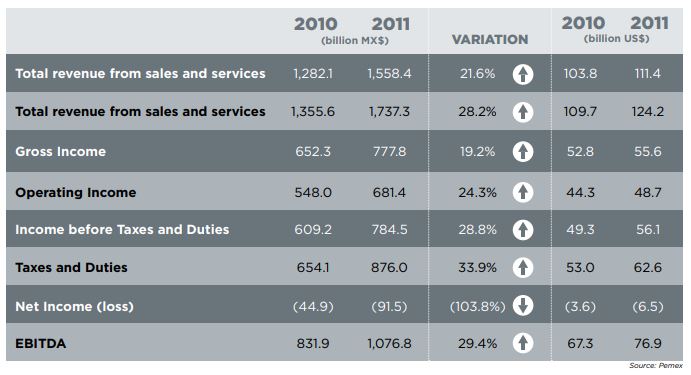