Pemex plays a pivotal role in the Mexican economic, political and social realm, and is an essential contributor to Mexico’s federal budget; it is estimated that around 34.5% of the federal government’s income in 2013 will be provided by the NOC. This staggering figure makes Pemex the main source of public financing in the country. Therefore, it is of the utmost importance to optimize the sustainable financial performance of the company.

Key financial figures presented in March by Pemex’s Board of Directors seem to support the notion that things are looking up for Mexico’s national oil company as well as the federal budget. Pemex reported record-breaking numbers for 2012. Total sales registered an all-time high of US$126.6 billion (MX$1.647 trillion) and the company’s EBITDA recorded a new high of US$88billion (MX$1.145trillion), both figures represent a 5.7% increase over 2011. Moreover, Pemex’s total investment also reached a record high of US$23.98 billion (MX$312 billion).

The most remarkable result was the income generated by the NOC; which reported a gross income of US$63 billion (MX$820 billion), an operating income of US$69.79 billion (MX$908 billion) and a net income of US$400 million (MX$5 billion). This meant that Pemex announced a net profit for the first time since 2006, and only for the second time since the turn of the century, in spite of the fact that taxes and duties paid by the company also reached a new record high of US$69.4 billion (MX$903 billion), beating the previous record set in 2011 by 3.3%. The taxes paid by Pemex in 2012 represent 54.8% of its total revenue and 99% of the operating income reported by the company last year.

The US$400 million (MX$5 billion) net income, which contrasts sharply with the net loss of US$6.14 billion (MX$80 billion) that Pemex suered in 2011 – is primarily due to the appreciation of the peso. The company’s record breaking sales revenue was greatly fuelled by an exchange gain of MX$45 billion (US$3.45 billion) that resulted from a 7% appreciation of the Mexican currency against the US dollar throughout 2012. On the other hand, the price of the Mexican crude oil basket only increased modestly, from US$101.09 in 2011 to US$101.86. This minimal increase of 0.8% was just enough to oset the 0.2% reduction in Pemex’s crude oil production, and did not contribute substantially to the rise in the NOC’s income. As mentioned by Pemex’s Chief Financial O·cer, Mario Beauregard, “During fiscal year 2012, Pemex recorded a net income of MX$5 billion, an increase in domestic sales revenues, an increase in other revenues, and a positive variation in the comprehensive financial result due to the exchange rate.”

Pemex still has not managed to reverse its downward production trend; 2012 was the eighth year in a row in which Pemex has reported a production decrease, albeit a small one. However, since it reached its maximum production level at the end of 2003, the NOC’s oil output has dropped 24%. However, the company’s production downfall has practically stabilized since 2010. The 0.2% decrease in 2012, down from 0.7% in 2011, indicates that the company might be able to register a production increase for the first time in nine years at the end of 2013.

Even though Pemex’s debt has increased, the NOC’s debt to revenue from sales ratio has decreased over the past three years, meaning that its ability to pay o its incurred debt has increased. The company’s performance in the capital markets seems to reflect the optimism surrounding the company’s future. On November 29, 2012, Pemex issued MX$25 billion (US$1.92 billion) in stock notes in three tranches, the biggest issue made by a corporation in the local market. More recently, on January 30, 2013, US$2.1 billion in 3.5% notes due in 2023 were also issued, of which 50% were allocated in the Asian market. This issuance is the one with the lowest yield ever for Pemex.

Pemex’s financial results for 2012, especially the income before duties and taxes generated, indicate that the company has a stable financial basis. However, its results will continue to depend heavily on the development of the crude oil price and the taxes and duties imposed by the federal government. During the first quarter of 2013, Pemex recorded total sales of US$32 billion, a 3.7% decrease over the first quarter of 2012 due to a lower oil price and a slight production decrease of 0.4% year-on-year. The corresponding drop in income before taxes and duties by 23.4% resulted in the government’s take for this quarter decreasing by 9.1%. 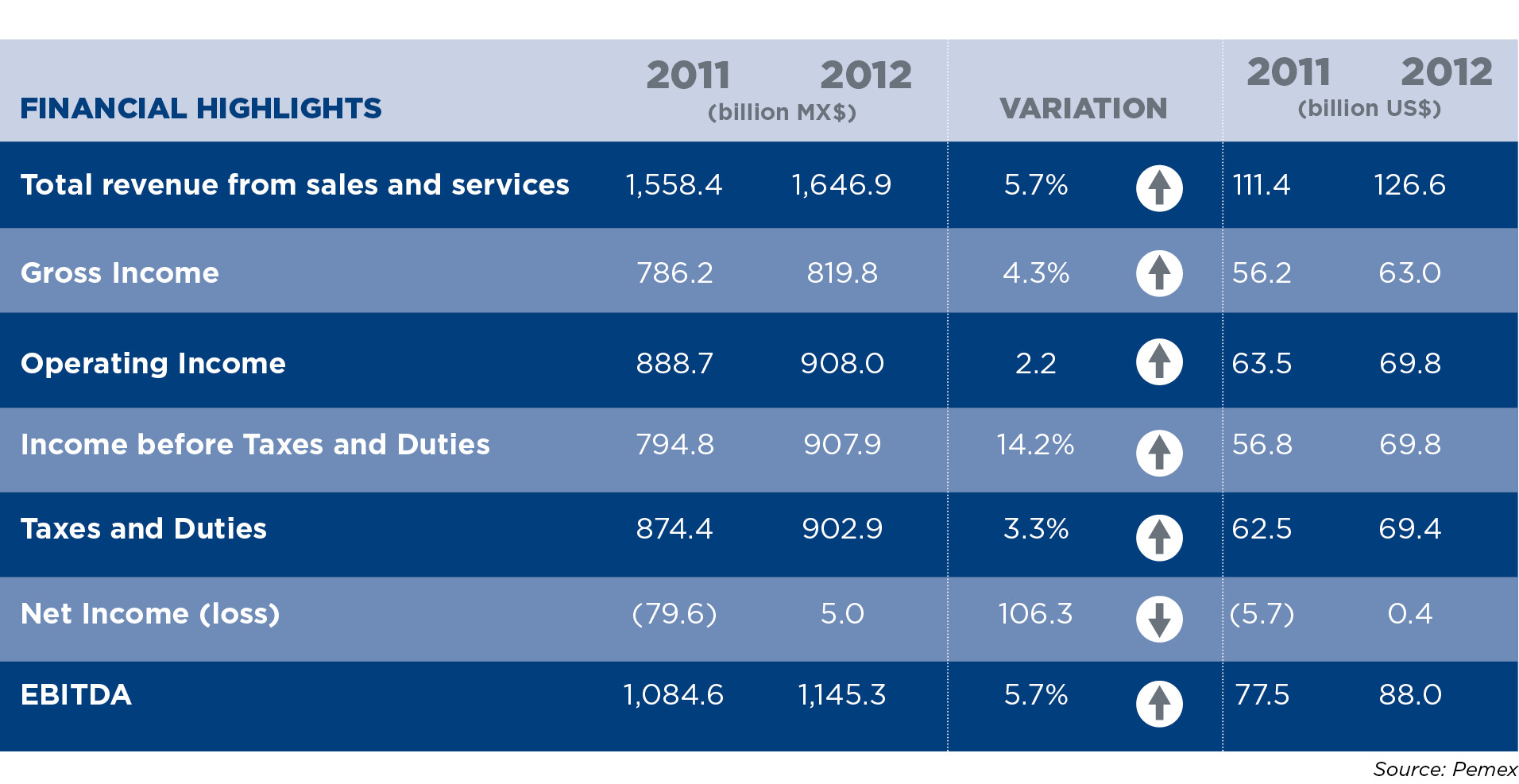 Nevertheless, given that Pemex’s annual budget, approved by the Chamber of Deputies, has gradually increased from US$13.8 billion in 2006 to US$25.3 billion this year. Of this budget, no less than 79% or US$19.9 will be dedicated to upstream activities that are the foundation of Pemex’s financial health. Provided that this investment is spent eectively, and building on the investment budget increases in recent years, improved operational performance in upstream activities should allow Pemex to deliver strong financial results again in 2013. 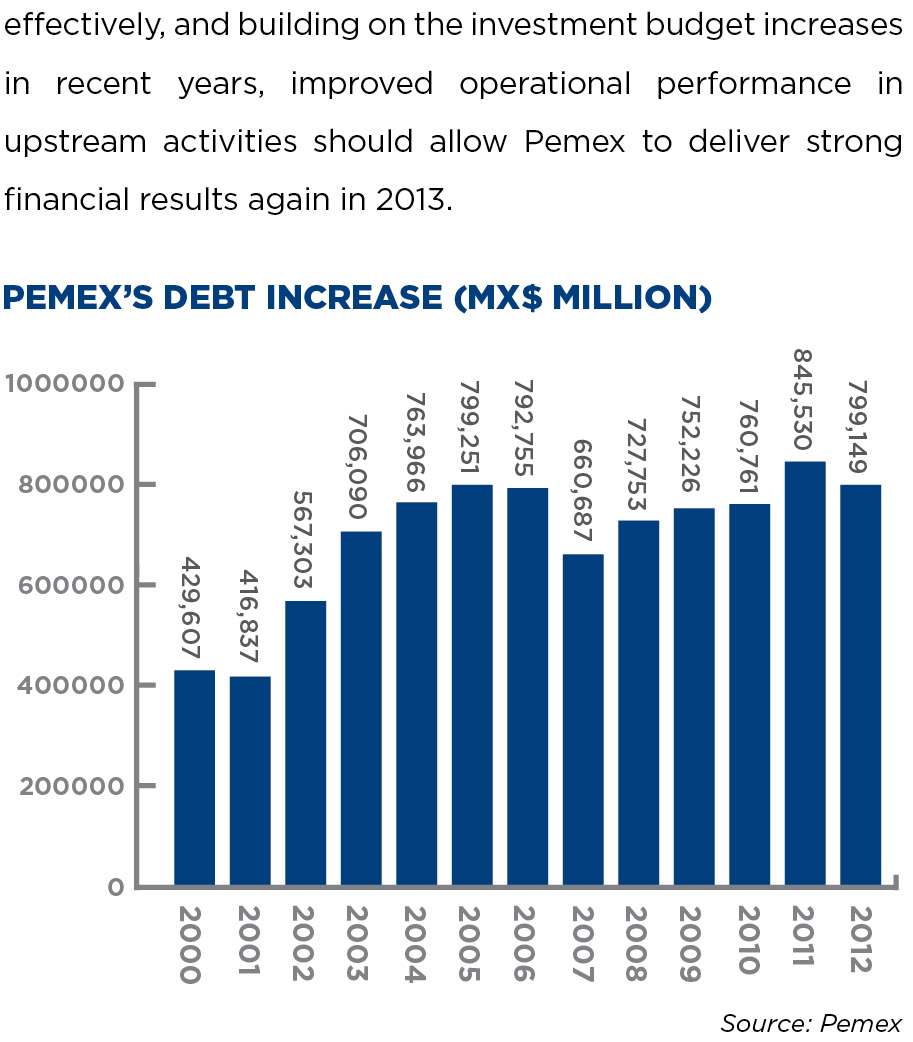