The first key to understanding Pemex’s financial situation is to recognize the heavy tax burden that the company faces annually. It is well documented that Pemex’s pre-tax cash flow could support high levels of investment. However, the taxation of Pemex accounts for between 30% and 40% of Mexican government revenues. In 2011, the amount paid to the Mexican Treasury was MX$876 billion (US$68.3 billion). With tax revenue of just over 21.01% of GDP, according to the OECD Economic Survey 2011, Mexico remains firmly at the bottom of the OECD member tax revenue ranking. Without the contribution of Pemex, Mexico’s tax revenue would only reach 13.52% of GDP, compared to the 34.77% of GDP average for the 36 OECD countries, which illustrates the complex financial position in which Pemex finds itself.

Since 2007, several changes have been made to the budgetary procedure and financial independence of Pemex, but still the company’s annual budget is subject to approval by the government. In September 2011, the company requested a budget for 2012 of MX$346.9 billion (US$26.54 billion) to Congress, but received only MX$301.3 billion (US$24.1 billion) – still up 5% from 2010, but 13% less than the company requested. Despite investment limitations resulting from the budget approval process, Pemex’s budget increased more than fourfold over the 1998-2012 period.

It does seem as though the government is keenly aware of the fact that Pemex needs greater autonomy in its financial dealings, as the Energy Reform of 2008 and tax reforms of 2007 and 2009 show. Today, it is a positive step that Pemex is able to set its own budget and lay out its own investment plans, even if this budget still has to be approved by the government. The company is also able to issue debt independently, which will help finance future investments. A new tax regime includes a lower tax rate for the Chicontepec Basin, as well as oshore areas. Royalties will also be reduced from 2012.

Pemex’s level of indebtedness does cause concern among some analysts, and increased to a gross level of US$51.9 billion in 2011. Pemex also has a substantial pension obligation which stood at around US$53.5 billion at the end of September 2011, an amount very close to the company’s funded debt. Although there has been some discussion about pension relief for Pemex, analysts are pessimistic about the chances of this occurring. Although the NOC’s pension liabilities are not guaranteed by the Mexican government, the chances that they would allow Pemex to default on its obligations are slim.

Moody’s currently gives Pemex a stable outlook, with an issuer rating of Baa1. According to the ratings agency, this is explained by strong implied support and uplift from the Mexican government, which has a government bond rating of Baa1, but also the high tax burden the company has and the eect this has on investment levels. Moody’s believes that Pemex has maintained solid access to domestic and international financing, but at some point in the future it could meet market resistance given the large amount of debt it needs to issue and rising leverage scenarios.

As a state-owned entity, Pemex’s ratings are linked to the credit profile of Mexico. With Mexico’s economy back on a healthy growth path driven by expanding domestic demand and rising industrial output, the upcoming July 1st presidential election is likely to be a key factor influencing Mexico and Pemex’s position in the financial markets this year. 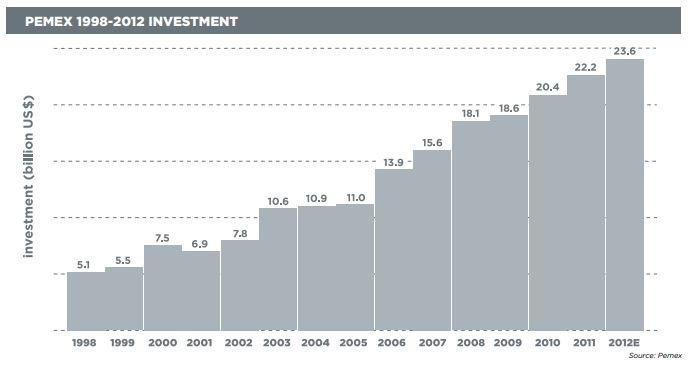