First Round of ISCs 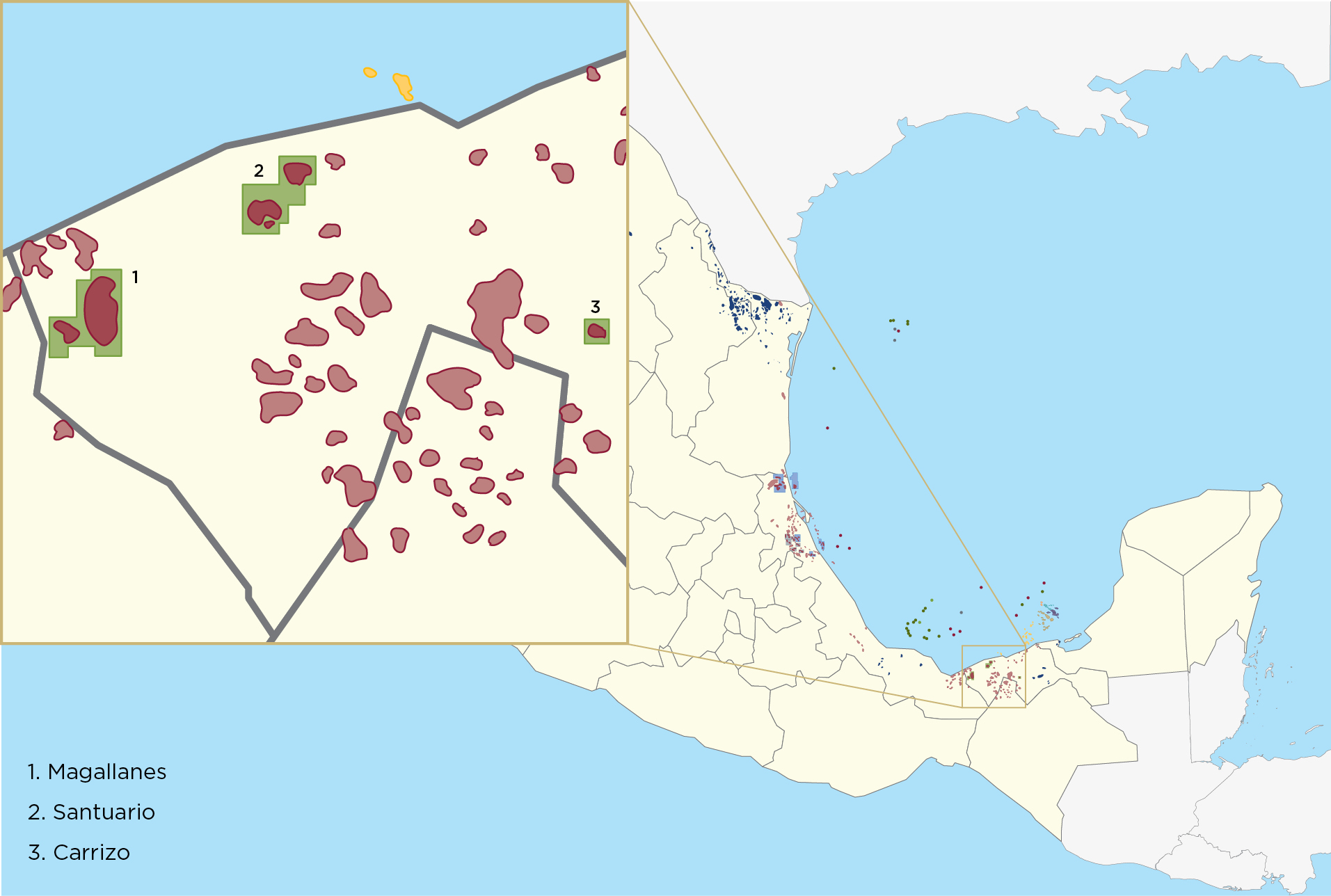 Operated by PEMEX for around 50 years, Magallanes is located in Tabasco. The area is located in the Salina del Istmo Basin, 50km from the city of Coatzacoalcos. Magallanes comprises two fields, Sánchez Magallanes and Otates, and covering 169.06km2 it is the largest area of the three areas included in the first ISC round. The block holds proven reserves for 27.03 million boe, including 22.99 million barrels of 1P oil reserves and 35.51bcf of 1P natural gas reserves. To this day, 86 sand reservoirs have been identified and more than 775 wells have been drilled at Magallanes, of which 329 had been closed, 308 were blocked, and only 54 were currently producing by September 2010, while 84 were on the process of being blocked. The two fields of Magallanes are currently producing from Late Tertiary sandstone formations, and the production challenges at Sánchez Magallanes, the larger of the two fields in the block, include sanding up, plugging with paraffin, and damage from significant water-invasion. The Otates field, where PEMEX began exploitation in 1965, now only has a small amount of remaining reserves.

Petrofac was awarded this contract in early 2012. “We have been in Magallanes for two years already, evaluating the characteristics of the field. It took a while to fully understand where the bottlenecks were in Magallanes, but production is now up significantly and continues to steadily increase,” says Harry Bockmeulen, Country Manager of Petrofac Mexico. The company has been able to increase oil output by 6.36% between the first quarter of 2012 and the first quarter of 2014, while gas production decreased by 5.66% during the same period. Average oil production for 2013 reached 7,401b/d of oil and 8.81mcf/d of gas. These numbers represent a 53% increase in oil production versus the baseline of 4,830b/d, and a 26% increase in gas production versus the baseline figure of 6.98mcf/d. Petrofac continues to drill horizontal wells in Magallanes, with more than 44 producing wells now in operation between this field and Santuario, which is also managed by Petrofac. The first quarter in 2014 already looks better, with production averages of 9,272b/d of oil. Petrofac will also continue its use of ESPs as a mechanism to continue increasing production in Magallanes. “Magallanes has steadier wells than Santuario and is a super-giant field: it has more than a billion barrels of original oil in place. The tank is big so we should continue to steadily keep drilling holes in the ground to better understand this complex field,” Bockmeulen adds.

Located in Tabasco, the main block offered during the first services’ contracting round was Santuario. The area is located in the Salina del Istmo Basin, like Magallanes, but lies to the west of the city of Comalcalco. It comprises three separate fields, El Golpe, Santuario, and Caracolillo, and covers the second largest area awarded during the first round at 129.93km2. El Golpe was discovered in 1963, but production of gas began to decline between 1974 and 1984 because of the presence of water in the wells. Santuario was discovered in 1967, and production started to decline in 1978. The last field to be discovered was Caracolillo in 1969, which was closed in 1993 and has seen no significant output since. The Santuario area has 29.53 million boe in proven reserves, with 25.69 million barrels of 1P oil reserves and 16.30bcf of 1P natural gas reserves. El Golpe has 1P reserves for 11.16 million boe, consisting of 10.06 million of barrels of proven oil reserves and 7.73bcf of proven natural gas reserves. The Caracolillo field currently has no proven reserves in place, and has a total of 11 non-producing wells. The other two fields have 200 wells in total of which 32 are currently producing. PEMEX considered its drilling activity at the Santuario area to have been successful, but the area is now in need of new technologies to restart production.

Petrofac was awarded Santuario during the first quarter of 2012, along with Magallanes. Bockmeulen is even more bullish about Santuario, saying that Petrofac has found it to be easier to understand than Magallanes. “In Santuario, the wells get more productive as we advance our program, and we believe that this field will continue to deliver on its long-term potential,” he says. Santuario has seen a 38.05% increase in its oil production and a 25.09% ramp up in gas outputs in the two years since Petrofac took control of the block. While Caracolillo remains unproductive, the block’s average production for 2013 hit 6,842b/d of oil and 3.93mcf/d of gas, up from 2012 levels of 5,439b/d and 3.52mcf/d. These numbers are good for a 51% increase in oil production when compared to the baseline of 4,520b/d given by PEMEX. At the same time, gas production is 15% over the baseline of 3.42mcf/d. Petrofac’s continuous efforts in Santuario have also led to the identification of new opportunities in nearby areas, such as Santuario-401 which is believed to hold approximately 150 million barrels of oil, with another potential 50 million barrels to be added over the contract’s lifespan. The first quarter of 2014 looked promising, with production averages going up to 8,071b/d of oil and 4.33mcf/d of gas.

The Carrizo block is the easternmost of the three areas included in the first round of ISCs, and the smallest block at just 13.01km2. It is composed of only the Carrizo field, which is part of the Comalcalco Basin that consists of seven sandstone reservoirs with depths ranging from 500m to 2,000m, and is located 8km west of the city of Villahermosa. The producing deposits in the province were discovered in 1962, and wells have been drilled to a total depth of 1,780m and have been completed in the range between 1,464m and 1,477m. Initial production amounted to 213 b/d of 27°API crude oil. Another 43 wells were drilled between 1965 and 1977, but none of these wells are currently producing: 30 were closed and 13 were plugged off. Over the last 11 years of its producing life, the field has had an average of 13 active wells producing a maximum of 1,200b/d before water entry initiated a steep decline. Having reached cumulative production of 14.86 million barrels of oil and 9.60bcf of gas, Carrizo was abandoned in December 1999. During 2000 and 2001 technological tests were performed in eight wells in order to reactivate the field, but these wells were subsequently closed due to lack of funds for development.

Since 2000, installed equipment and systems have been dormant without receiving any maintenance. Therefore, PEMEX decided to tender this field out in its first round of ISCs. Schlumberger won this bidding round after Administradora en Proyectos de Campos (APC) was unable to complete the required legal paperwork to operate there. Arindam Bhattacharya, President of Mexico and Central America of Schlumberger, comments that the region has posed serious social and community-related challenges that have not yet allowed the company begin operating in Carrizo. However, Schlumberger is hopeful that it will be able to start development activities soon, given the efforts being made by PEMEX and the local government to help out in solving these issues. Remaining proven reserves in the field, certified on January 2010, amount to 49.80 million barrels of oil and 5.80bcf of gas.