What does a country do when demand steadily climbs higher while production goes in the other direction? Such is the natural gas scenario Mexico is grappling with. From 2010 to 2016, demand for the fuel rose by 18 percent to 7.457Bcf/d but production declined by 24 percent to 4.834Bcf/d in the same period.

So far, a big part of the answer has been to import the in-demand fuel from Mexico’s largest commercial partner, the US. In 2010, natural gas imports covered only 23 percent of the national demand, while by 2017 the number had increased dramatically, to 56 percent. The fact that Mexico focused predominantly on oil production in the past caused the country to fall behind in natural gas production and infrastructure development compared to other nations, says Felipe Echavarría, Director General of natural gas provider Gazel México.

According to the Ministry of Energy’s Natural Gas Forecast 2016-2030, in an optimal scenario national natural gas production will decrease by 16 percent by 2030 compared to 2015 production. Worst-case estimates for the same period put this number as high as 51 percent. Round 1.3 saw 100 percent of the oil and gas fields up for grabs assigned. Although natural gas production from these fields will not have a substantial impact on Mexico’s natural gas production, it serves as an indicator of private-sector interest in investing in upstream natural gas opportunities. Strata BPS, winner of three of the eight fields that contained natural gas without condensates in Round 1.3, put its daily average production for these blocks during February 2017 at around 8MMcf. 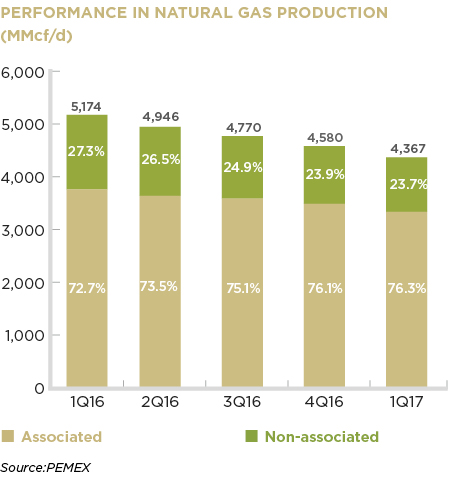 Mexico’s gas demand is satisfied with a pipeline infrastructure measuring 15,755km, of which 10,068km belongs to SISTRANGAS and 5,687km belongs to private companies, according to the Natural Gas Forecast. Following the liberation of the midstream sector, Mexico established an open season procedure to assign the 6.2Bcf/d of transportation capacity belonging to SISTRANGAS to the different players in the market. Open season Round Zero involved only the stateowned companies PEMEX and CFE. CFE, PEMEX and IPPs with pre-existing contracts assigned by CRE were assigned assets amounting to 658MMcf/d, 1.392Bcf/d and 1.592Bcf/d during Round Zero. On May 8, 2017 the results of Round One were published by CENAGAS, assigning a total of 2.236Bcf/d of the 2.563Bcf/d that was not included in Round Zero.

With all the optimism surrounding the new market, there continue to be major hurdles stopping more projects coming to fruition in Mexico, says Donato Santomauro, Mexico Country Manager of international general contractor Bonatti. Operators evaluating the feasibility of projects face two main issues: firstly, securing anchor contracts in a market that is becoming established but lacks proven rules and regulations as well as consolidated players, and secondly, obtaining the required permits and rights of way. “Permits are becoming more difficult to acquire and sometimes their absence can delay projects for months,” says Santomauro.

Meeting Mexico’s growing natural gas demand requires a modern, reliable and extensive network of pipelines and storage infrastructure, as Rogerio Mendonça explains: “The pipeline network is a critical part of the energy infrastructure, evolving over time to reflect shifting patterns of supply and demand.” Some players have already started working on infrastructure projects that were foreseen in the Ministry of Energy’s Fifteen Year Plan 2016-2030. The south Texas-Tuxpan pipeline to be constructed through the JV between IEnova and Transcanada is the longest and most capital intensive of all, measuring 800km and requiring an investment of US$2.1 billion. 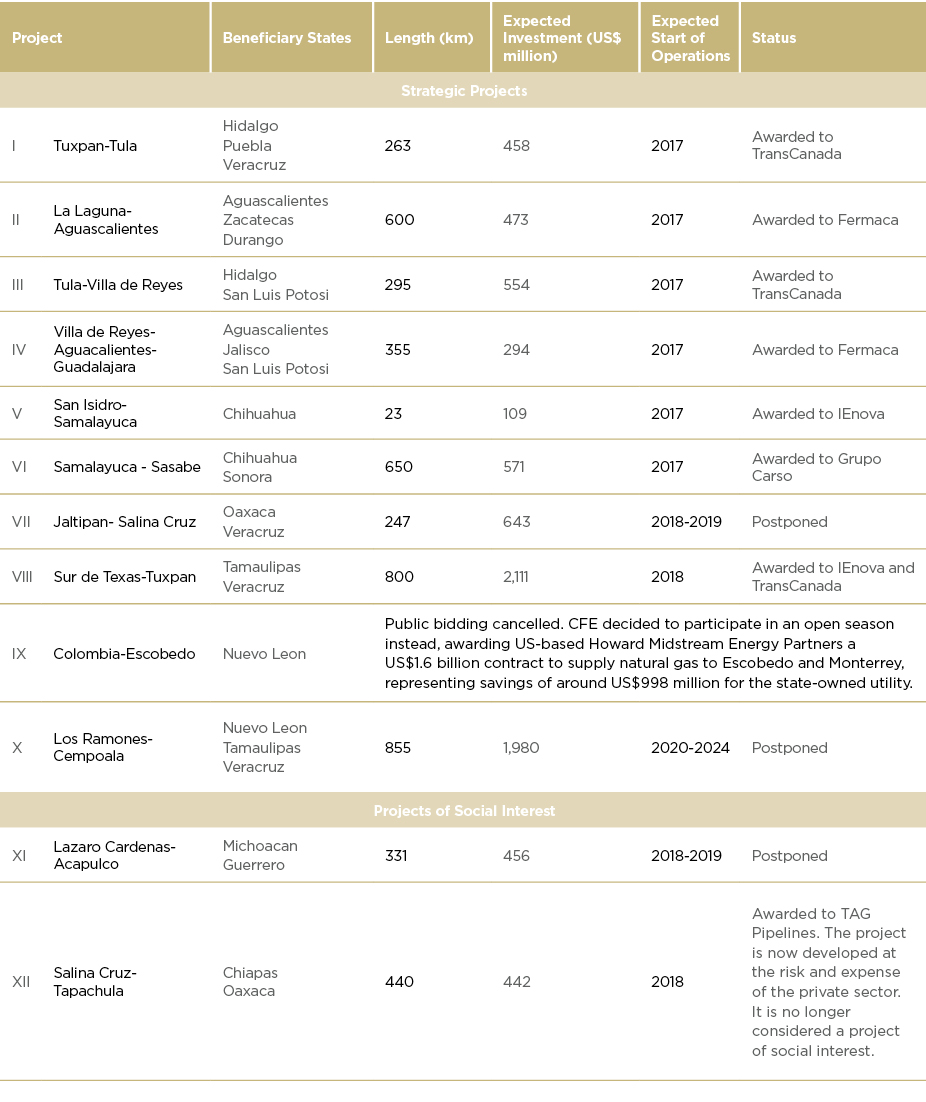