A Foot in the Door in Mexico's Drilling Industry

The Mexican rig market has been relatively stable for a number of years now; Noble remains the biggest player in the Mexican oshore market and jackups are still the most numerous type of drilling rig in operation in the Mexican sector of the Gulf of Mexico. Although drilling operators in Mexico are mainly international. However, there are some domestic Mexican companies, including Perforadora Central, Grupo R subsidiary Industria Perforadora de Campeche, Perforadora Mexico, GOIMAR and CICSA.

Cantarell and KMZ are the two main regions where Pemex is focused on drilling operations. Pemex’s programme for the drilling of production wells in both of these fields will continue to drive demand for platform rigs and jackups in the coming years. Additionally, Pemex is carrying out exploratory drilling in new areas, including deepwater exploratory drilling with semi-submergibles. In order to boost its production levels, more exploration will take place in the Gulf of Mexico in the months and years to come as the company continues its search for oil reserves.

Last year, Pemex faced shortage of jack-up rigs, an issue that the NOC plans to address this year, according to Carlos Morales Gil, General Director of Pemex Exploration and Production (PEP). He says that Pemex had to void several tenders due to a lack of proposals and that they are still struggling, as of February 2012, to contract additional jackup rigs for the NOC’s activities in Cantarell and other fields. “We are going to increase significantly the level of drilling activity oshore, and we are in the process of contracting all these rigs, so that is a big issue,” he says.

A tender ruling on July 15th 2011, for example, stated that three out of the four jackup lease contracts with no purchase option that constituted the bid were void. There was no proposal submitted at all for one contract and two contracts received only one proposal that was ruled technically noncompliant. The one contract of the group that was awarded went to Perforadora Central, the only bidder for the deal.

On a global level, the deepwater rig day rate increased significantly at the start of this year, reaching its highest point since May 2009 in February 2012, according to the IHS Petrodata Day rate index. Worldwide, the average jackup day rate at the end of last year was US$106,000. In comparison, two contracts awarded to Noble Corporation in June and July 2011 were won at dayrates of US$114,150 and US$104,400 per day. 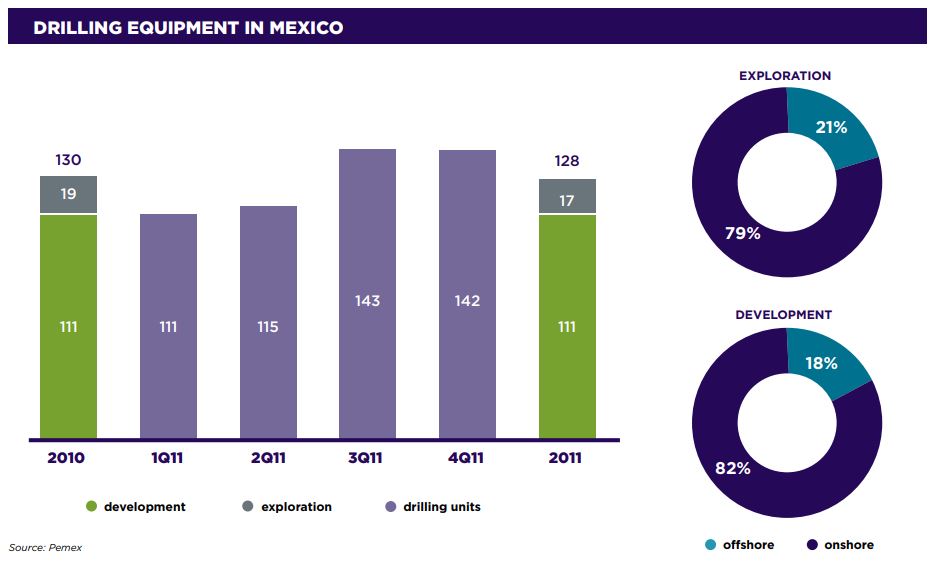