Fresh Energy at the Helm of PEMEX

Q: As the new Director General of PEMEX, in which direction will you take the company’s transformation process?

A: PEMEX’s transformation is a necessary step to ensure the company’s viability and the generation of value for the country. Therefore, we are shaping a new stage in the NOC’s history. Our main objective is to become a profitable and highly competitive company that plays a key position in developing Mexico’s energy industry, while strengthening our role as a productive enterprise of the state to consolidate PEMEX as one of the most important oil companies in the world. The cultural shift in all PEMEX employees and the implementation of a new work system, which is based on a more efficient use of assets and infrastructure, will translate into higher operational excellence. The ultimate objective is to generate more revenues that will benefit the Mexican people from production, processing, transportation, distribution, and commercialization activities. In the short term, PEMEX will have a flexible and agile organizational structure that, through corporate governance practices, will guarantee an efficient and transparent management.

Q: What is PEMEX’s production strategy, given the company’s budget restrictions?

A: Taking the current oil price into account, the exploration strategy consists of delaying or reevaluating certain investment projects, such as for deepwater developments and fields that are not profitable at the moment due to high production costs. In addition, we can take advantage of the tools provided by the Energy Reform, which allow PEMEX to form strategic alliances and access improved technologies while sharing risks. PEMEX, as the main oil and gas company in Mexico, is the most attractive partner when it comes to investing in the country due to its infrastructure and proven reserves, as well as the accumulated experience of its engineers and technicians. These elements will be the basis to negotiating in a competitive fashion with players that qualify as the best partners, striving to obtain the best conditions for the country. In this way, PEMEX will be able to attract a third party’s resources, share the risks, and thus increase production levels. Costs will be ultimately reduced by operating according to the highest international industrial standards that, under shared schemes, will allow us to generate revenues and maximize the country’s resources.

Q: How is PEMEX facing the global downturn resulting from low oil prices?

A: The global oil and gas industry is going through a difficult time, and PEMEX is not exempt from this. Therefore, just like other companies in the sector, PEMEX had to adopt stringent measures to guarantee its viability. PEMEX’s financial priority is to consolidate its structure to ensure stability and credibility in the market. We have insisted on the fact that the NOC is facing a liquidity issue, but this is not the case for the company’s solvency, so its viability is safe. Just like in other low oil price cycles, PEMEX is addressing a challenging scenario responsibly, adjusting the budgets for each one of its areas by MX$100 billion. This adjustment has been implemented in practice, as accounts for several anticipated programs have been shut. This, however, does not have a negative impact on the company in the long term. Most importantly, the adopted measurements will not affect the NOC’s employees and facilities. I would like to stress PEMEX’s commitment to our financial and work-related obligations.

Q: How is PEMEX adapting its operations to the financial adjustment plan?

A: The adjustment, far from weakening the company, makes it stronger by forcing us to accelerate the necessary changes and restructure costs and efficiencies. PEMEX will take advantage of the flexibility it was offered by the Energy Reform, and implement instruments such as contract migrations and farm-outs, which will allow us to attract financial resources, technology, processes, and experience. 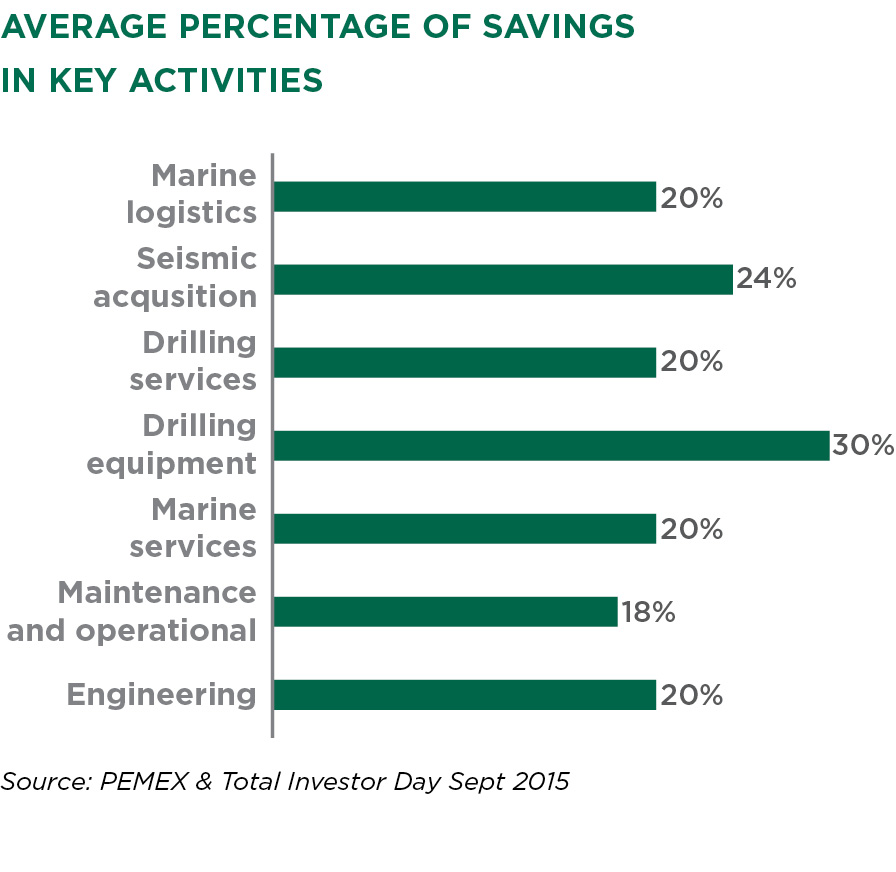 As part of the measures that complement the budgetary adjustment presented in February 2016, we are directing PEMEX to improve its financial indicators though concrete actions such as the saving strategies the company implemented last year by changing its pension schemes. We are already generating efficiencies, as we have reduced administrative costs through actions such as merging three supporting areas in the Director General’s office into one and eliminating two corporate divisions, Human Resources and Technological Research and Development, which were reassigned to the Corporate Administrative Division and PEMEX E&P respectively. In addition, we have reduced overall expenditure and expenses related to personal services, travelling allowances, and general expenses, which alleviates the company’s liquidity.

Q: What strategies has the government put in place to assist PEMEX in this challenging moments?

A: The NOC received resources of MX$73 billion from the federal government, through the Ministry of Finance, in April of 2016 with the goal of helping the company face the challenging times the industry is facing. Considering this significant capitalization, and with previous approval of its Board of Directors, PEMEX committed to clear and normalized payments to suppliers and contractors in the short term, so that current liabilities can be aligned with the company’s operations. In order to carry on with this effort and adding to the request of credit lines for MX$15 billion with the development bank, PEMEX paid its 2015 debt according to the schedule agreed on by its clients.

Since the government’s support considers the strengthening of PEMEX’s assets, the NOC’s fiscal regime has been modified, resulting in more cost deductions and lower taxes, which are estimated at MX$50 billion for the 2016 fiscal year. This will lead to higher liquidity indexes by strengthening the cash balance, as well as an improved capital structure and debt track record for the rest of the year. All these measurements, paired with a lower amount of debt, improve the company’s capital structure in order to face the challenge of adjusting its costs and its business strategy to the current reality as quickly as possible. PEMEX is seeking greater efficiency levels to consolidate itself as an attractive and reliable partner that will help develop the national energy sector.