Mexico has six refineries strategically positioned in the cities of Cadereyta, Madero, Tula, Salamanca, Minatitlan and Salina Cruz, to cover the country’s demand for refined products with an installed capacity of just over 1.6 million b/d. With an average national consumption in 2017 of 1.58 million b/d, out of which 70 percent is imported from US refineries, the problem of the country’s refining industry is not so much capacity but refining efficiency. In 2015, production efficiency of refined products only reached 61 percent, and the percentage of unscheduled shutdowns reached almost 13 percent. Oscar Scolari, CEO of Rengen, sadly explains that capital is being lost in the refining sector. “At the Salina Cruz refinery, over US$3 billion were invested for its modernization, but it is not producing and nor is the Minatitlan refinery,” he says. “Others, such as Cadereyta and Madero, are running at marginal levels. Something has to be done.” This comes as no surprise to Ixchel Castro, Manager of Oil and Refining Markets for Latin America at Wood Mackenzie, who says she knew that improving the Mexican refining sector would take much more work compared to the upstream. “We always knew that revamping the refining sector would be a complicated process that would need the heavy participation of PEMEX to open the sector to new competitors, as well as from regulatory agencies to design the necessary legal framework for companies to successfully operate in Mexico,” she says.

Although operational excellence represents an opportunity for improvement, downtimes are also related to supply chain inefficiencies, as 74 percent of the unscheduled shutdowns were related to the supply of services. Stefan Lepecki, CEO of Braskem Idesa, emphasizes the importance of value chains, and the opportunity Mexico has to be a highly competitive country. “Production and commercial chains start with securing feedstock and the potential in Mexico is incredible in that regard, as it has the feedstock reserves and the necessary markets, the two fundamental pillars for this business.”

In its 2017-2021 Business Plan, PEMEX stated its commitment to revamping its refineries through alliances focused on auxiliary activities and operation and maintenance, areas in which private companies see a bright future. Lepecki finds this commitment highly attractive. “It is essential that the country continues to work under a strong and ambitious industrial policy. This requires constant cooperation between PEMEX, the private sector and regulators to foster a fruitful dialogue on how to apply best practices to the industry,” he says. Likewise, Nicolás Bracho, Energy Executive, North Region of Latin America for Dow, sees an open PEMEX ready for the challenge in the country. “Mexico has played by the rules and it is undoubtedly attractive for investment. PEMEX has changed, opening itself to discussions of projects and plans.”

The transparency of the hydrocarbon licensing rounds has been praised all over the world. It has also sparked the increasing interest of international companies in the country. While recognizing this, Castro remains vigilant wary of the work that remains to ensure continuity in the Mexican refining and petrochemical industry. “We must be absolutely sure that the market opening brought about by the reform cannot and will not change, taking us back to a market with regulated prices, because that would diminish international interest in Mexico. Another important component for continuity is the open seasons, which have been delayed,” she says. Finally, she calls for an update on the process of PEMEX’s search for partners to upgrade its refineries in Tula, Salamanca and Salina Cruz.

Castro also warns that despite the the positive and negative effects of having the largest refiner in the world, the US, right next to an industry that is just opening after 80 years, there are also negatives. “Mexico being neighbors with of the largest refiner in the world could eventually translate into pricing advantages, especially if it is arranged through long-term contracts,” she says. “Although this is a big win for the country, it can also be detrimental to the local market because it could prevent local projects from being profitable.”

TAKING THE INDUSTRY INTO NEW HEIGHTS

Mexico is known as a perfect logistics hub, as evidenced by the prosperous automotive and aerospace industries. In terms of petrochemicals, the country has also managed to positioned itself in a competitive location, although the decrease in production and energy security are problems that must be solved to ensure the country maintains its position. Bracho explains that although the Energy Reform has resulted in more competition, it is still too early to properly measure the impact. “This sector takes a long time from the moment time an operator is awarded an oil field to when it produces the first commercial molecule of gas, and then until the point it is used for the production for raw materials,” he says. “We will start to see the results of the industry’s opening and the arrival of petrochemical players in about three years. Also, we have to bear in mind the process of building storage capacity and transferring gas from production fields to these plants, so any petrochemical company can use it.”

Furthermore, according to Lepecki, the country is capable of doing so. “If we continue working in a collaborative manner, this country will have an unbeatable status as a global center for petrochemicals. The natural resources are here, the logistics networks are established and it is an open and competitive market. The emphasis on the sector is there, so we have to make the most of this situation to propel the sector to new heights.,” he says. Bracho shares Lepecki’s positive vision. “I am quite positive about the industry’s future in Mexico and I expect to see a reversal in the current downtrend in the country’s production from next year on.” 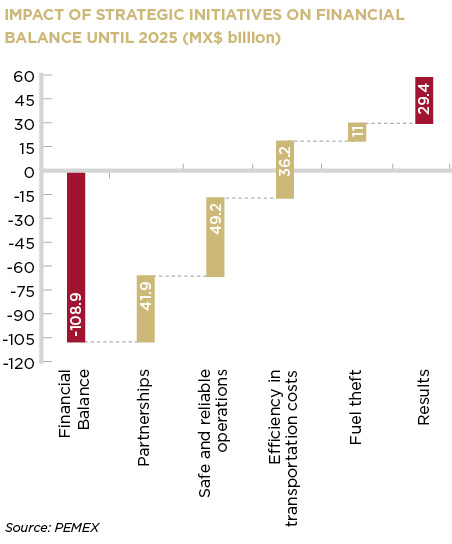