The Future of PEMEX Lies in Capital Markets

Q: Which factors have put PEMEX in the challenging position it finds itself today?

A: The reason PEMEX has reached such a low point is because the lack of preparation before the Energy Reform, and the drop in oil prices led PEMEX to crash in a short period. The accumulation of these situations has created a perfect storm for the productive enterprise of the state. The exceptional talent that it holds is not enough to save the NOC, which urgently needs to undergo a culture shift. PEMEX must start working with partners and not only contractors, and realize it will be just another player in Mexico’s oil and gas industry. In addition to updating its culture to reflect the current industry structure, it also needs to readjust two of its fundamental aspects.

One of the flaws of the Energy Reform was the absence of consideration of a transitional tax regime for PEMEX, leaving the parastatal void of any incentives to continue functioning efficiently. The fiscal regime for the assignations is deeply confiscatory, and it is destroying all of the NOC’s competitiveness and value. I believe these should be overturned, either through farm-outs or through the migration of contracts. Another solution would be for Congress to change the fiscal regime of the assignations, but this is an unlikely option. The second revision that should be made lies in the firm’s financial structure. Although this is a sensitive topic, it is a perfect time to bring it up given the fact that Saudi Arabia is breaking the taboo of opening public national oil companies to financial markets. I have always said that PEMEX will eventually die if it does not enter capital markets. PEMEX must avoid sinking further into debt at all costs. Naturally, before it can consider floating a certain percentage of its shares, it must revitalize itself to make private investment an attractive option. The first step toward this is to restructure the company, after which the NOC can work toward making its culture more partner-oriented and eliminating the assignations that are constraining it.

Q: Under which circumstances could the Mexican government consider floating PEMEX shares?

A: We will see the impact of the Energy Reform in the medium and long term, as IOCs and independent operators will eventually catch up and contribute the an overall production increase. Only a certain percentage of this production will come from the NOC, decreasing the dependence of the federal budget on PEMEX. Once we reach that point, the productive enterprise of the state will have become a more efficient competitor and the political class will have more pragmatism. The concept of floating a percentage of PEMEX shares in the near future is not as drastic as the Energy Reform was back when it was announced. A capital intensive industry needs capital, and when capital cannot be accessed due to reasons such as debt, a company restructuring and a change in the fiscal regime is needed. Once PEMEX restructures and the fiscal burden is reduced, it will be attractive enough to float its shares. Such an action cannot come from desperation, but rather must be the result of a sound longitudinal exercise that will take at least five to ten years. Going public will be the next natural step for PEMEX, which is also positive because the pressure imposed by investors will lead to greater efficiency and transparency. It would be a disaster if PEMEX shares were floated right now, but it should happen in the near future, especially if the company manages to restructure successfully. 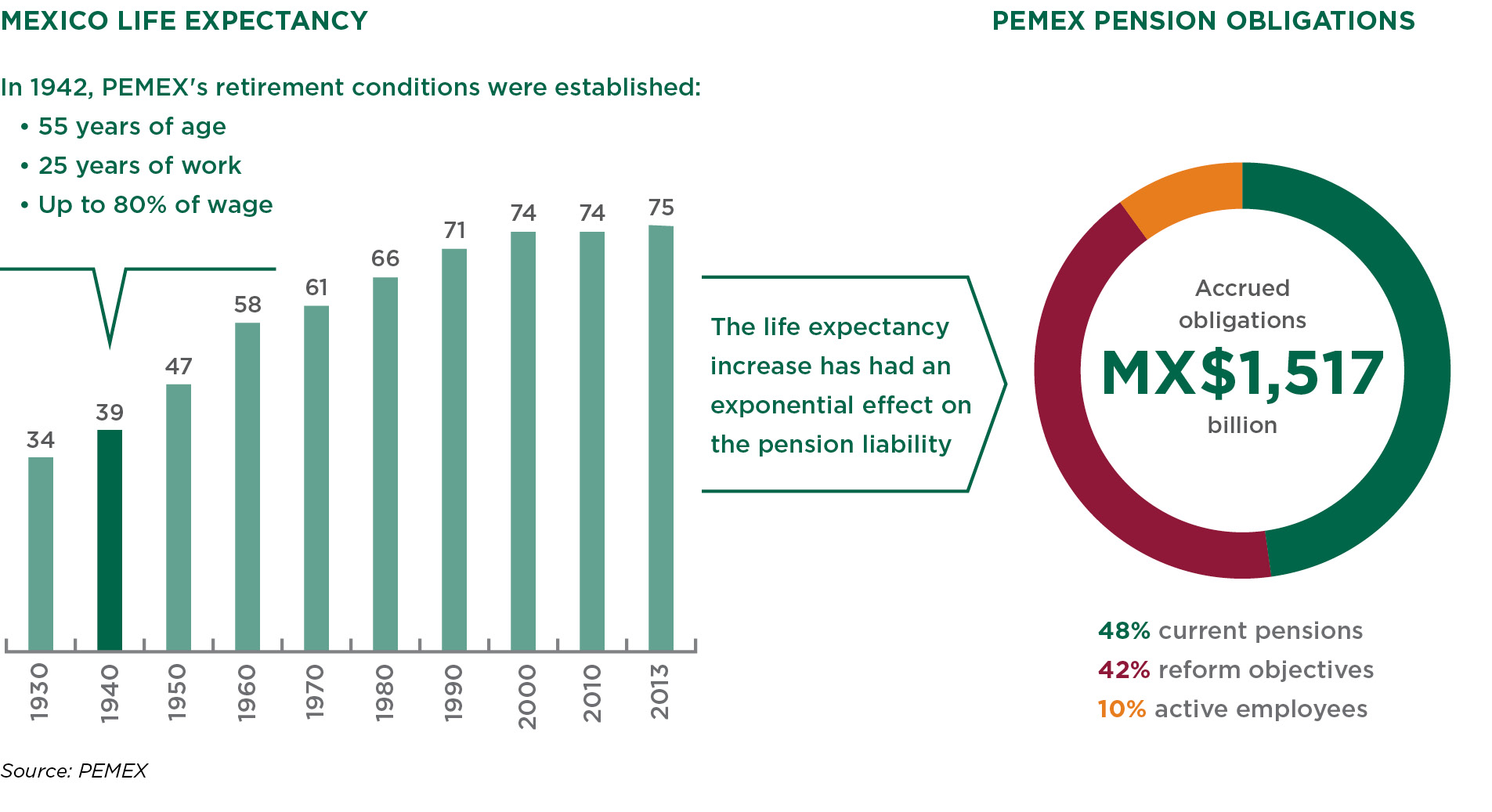 Q: How could PEMEX best improve its access to capital?

A: PEMEX should float shares in the segments of the industry where it is most difficult to raise capital. The market is open for all three segments of the oil and gas industry, and there are different financial vehicles for the hydrocarbons value chain. For instance, Fibra E was created for the midstream sector, as the availability of a market, a transportation system, and off-takers make this a stable and sound business. For the upstream segment, the natural course is to enter capital markets because PEMEX does not have much to offer in this regard. PEMEX can add value in terms of human capital and experience in certain assets, but it cannot contribute much in projects such as deepwater operations, since it does not have any fields from Round One. If the NOC could at least raise capital on its own for these enterprises, it would become much more attractive for IOCs, which would then contribute the experience lacked by PEMEX.

Q: How could corruption impact the Mexican oil and gas industry, and what are its implications for the licensing rounds?

A: In the energy sector, the impact of corruption is mostly felt in public procurement by the state-owned enterprises. When it comes to the opening of the sector, I have to recognize the authorities’ standards in Round One in terms of transparency and the perception of the round, which is a positive signal because the tenders are the key component to the success of the Energy Reform. Nonetheless, corruption in other areas is far more complex. Whenever there is a crisis there is room for corruption, and the current woes of the oil and gas industry are no exception to this rule. People find a way to loot spoils when there is a vulnerable entity. I am afraid this could be happening or could happen if PEMEX and CFE and not careful in their restructuring processes because the conditions for corruption are there. We have different scenarios, such as the successful achievement of transparency seen in Round One, and a negative scenario, in which certain people see a vulnerable PEMEX and want to take advantage of the situation. In the case where corruption were to take over PEMEX, companies that are not directly interacting with the NOC would not be significantly affected, but it would be naïve to underestimate this statement. In the first few years of the reform, all companies in the Mexican oil and gas industry will be interacting with PEMEX because they will be using the NOC’s infrastructure, particularly the winning companies from R1-L03 and the CIEP and COPF contracts. 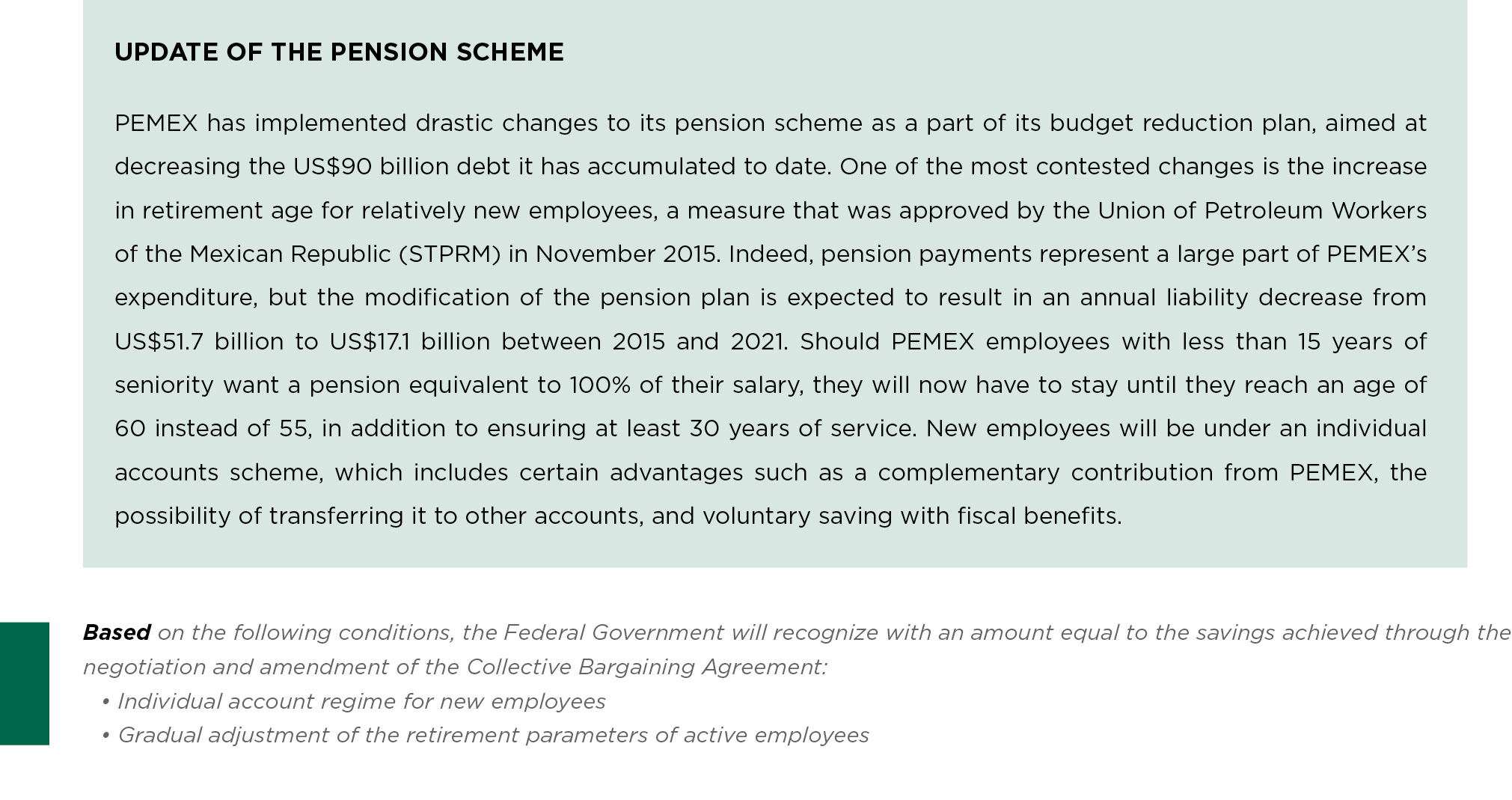