In 2013, natural gas production registered 6.37bcf/d, a 0.2% decrease over 2012 production that amounted to 14.4mcf/d. This volume included 691.4mcf/d of nitrogen, which is associated with the gas produced and is usually an undesired composite. The Northeast and Southwest Marine Regions registered an increase in natural gas production, while the North and South Regions experienced a decrease. The annual target was surpassed by 1.7% or 109.3mcf/d, mainly due to higher baseline production than expected and additional production coming from major repairs of wells in Ku-Maloob-Zaap. Higher baseline production levels were also registered in Ixtal, Kuil, and Caan in Abkatún-Pol-Chuc and at Cantarell in the Northeast Region, which streamlined its production operations in high gas-oil ratio wells. 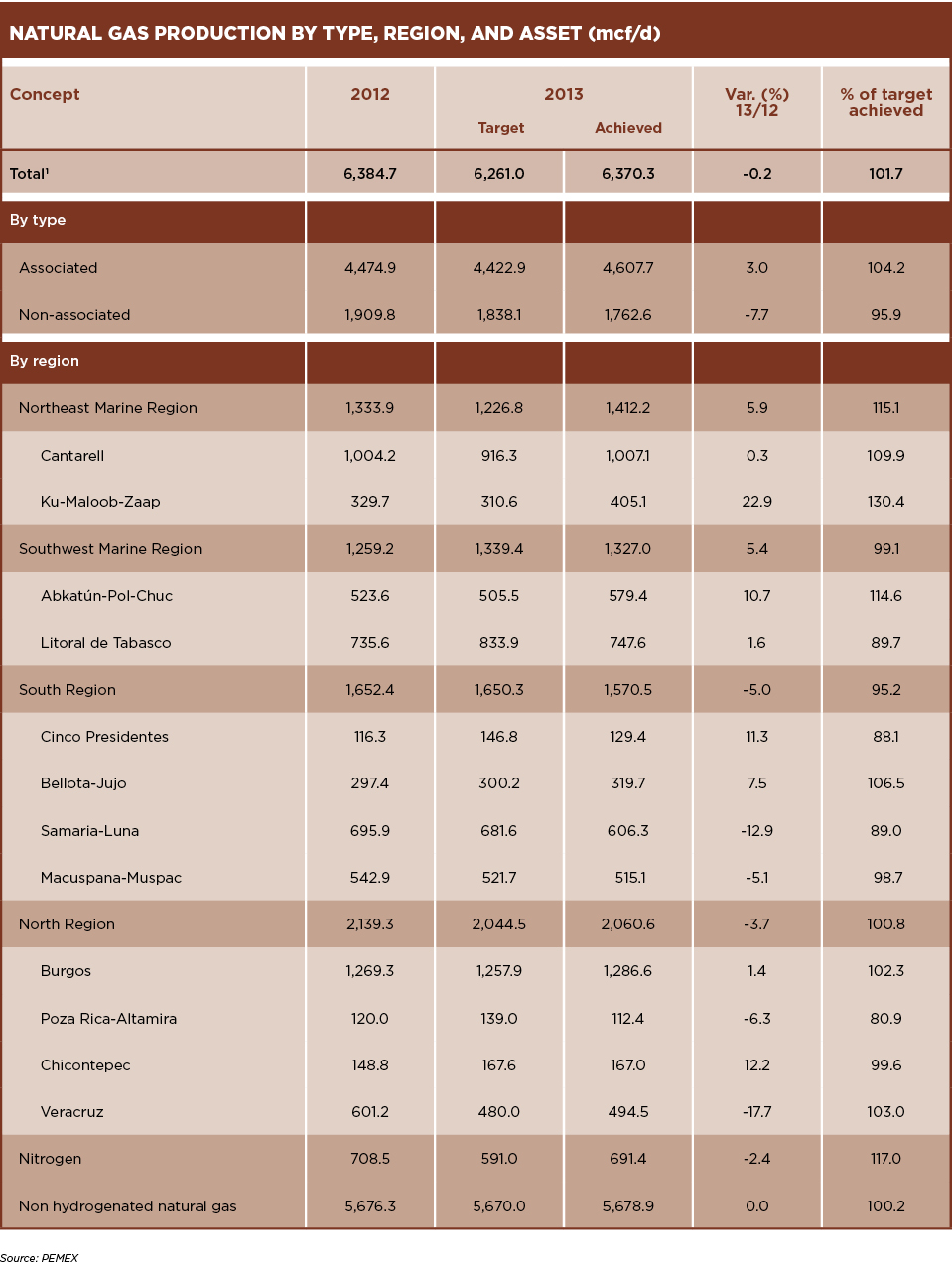 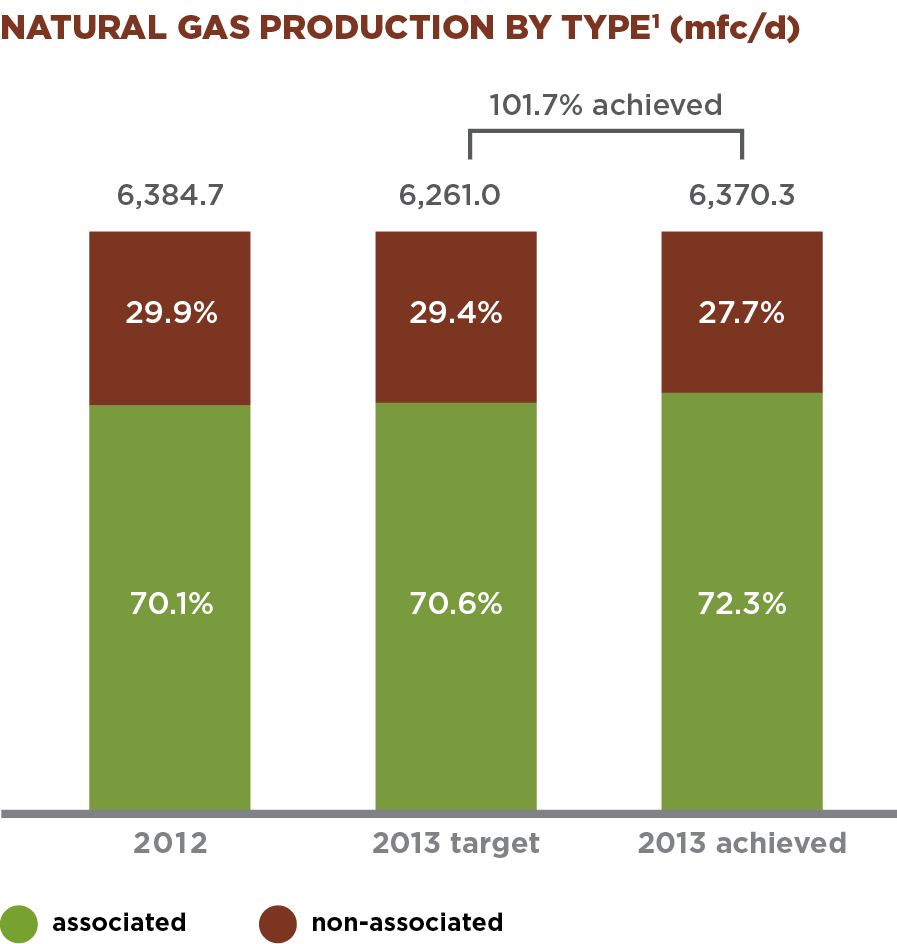 In 2013, gas production reached 1.412bcf/d, a figure that exceeded the previous year’s production by 5.9%. This was due to the increased production coming from well completions, particularly from the Maloob field in Ku-Maloob-Zaap. As a result, production targets were surpassed by 15.1%, mainly due to a higher baseline production level in KMZ and the optimization of well exploitation in high gas-oil ratio wells in Cantarell.

Production of 1.327bcf/d of natural gas was reached in the region, a 5.4% increase over 2012. This was mainly the result of higher production coming from the development of the Kuil field and the startup of operations in the Etkal and Onel fields in Abkatún-Pol-Chuc, as well as the production increase in the Tsimin field at Litoral de Tabasco. The region fell short of its targets by 0.9%, due to the increase in fractional flow of water, a smaller baseline level of production, and a production decrease from well completions in the Crudo Ligero Marino area of Litoral de Tabasco.

Gas production in this region averaged 2.061bcf/d, a 3,7% drop relative to 2012. This was caused by a production decrease in Veracruz, where output fell by 106.7mcf/d due to natural decline. Nevertheless, the region’s production target was barely exceeded by 0.8% due to well completion operations in the Nejo field, and the startup of production in the Master field in Burgos.

In 2013, natural gas utilization rate reached 98.1%, excluding nitrogen, which was an increase of 0.1% when compared to 2012. However, PEMEX fell short of its annual targets by 0.2%, mainly because of the effects caused by end-of-the-year flaring in Ku-Maloob-Zaap. The volume of gas released to the atmosphere through gas flaring amounted to 123.9mcf/d, which was 3.1mcf/d less than in 2012. The increase in the utilization rate of natural gas was mainly due to the construction of infrastructure for gas handling and transportation at marine platforms, the implementation and consolidation of the operational reliability systems in PEMEX, as well as the actions taken in Cantarell to manage the exploitation within the transition zone. 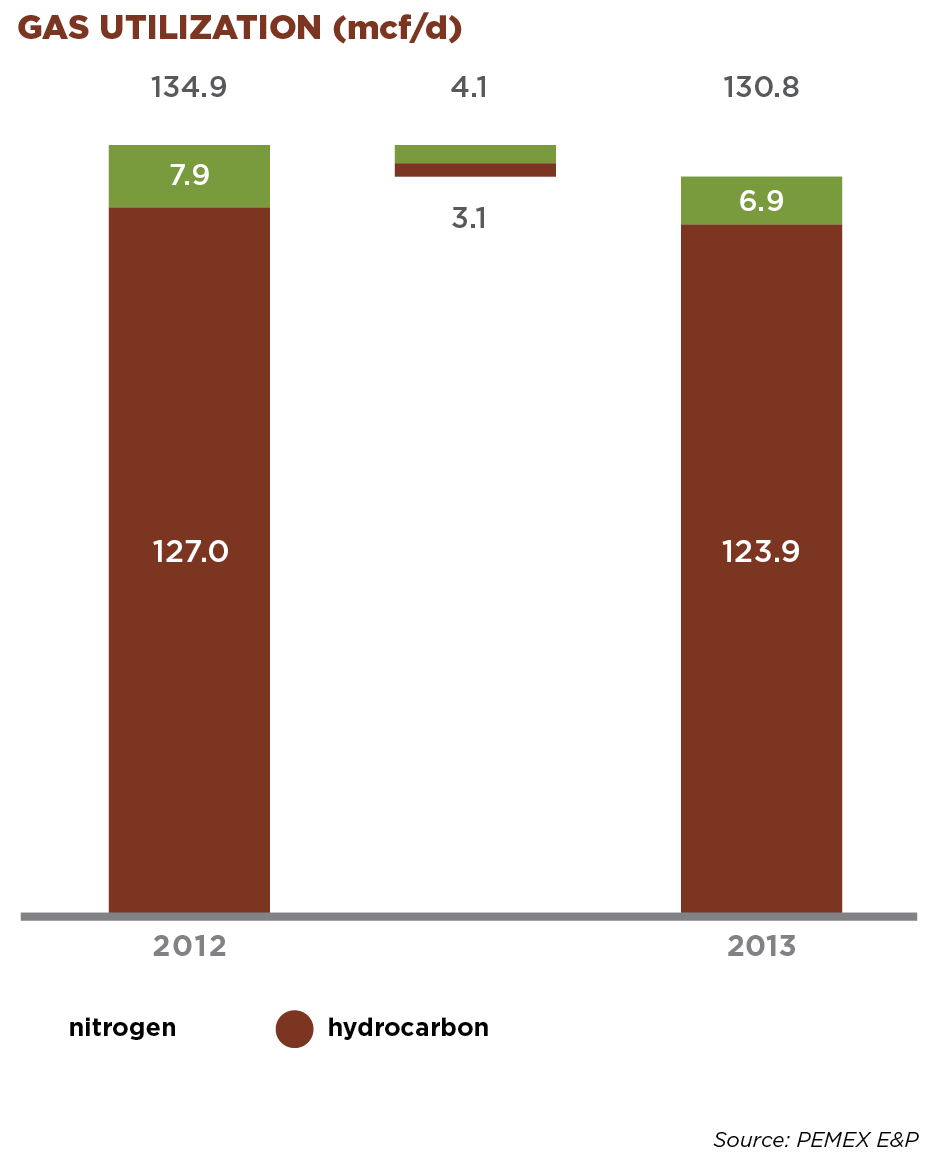