Gas flaring has seen a resurgence in Mexico in recent years. From 2001 to 2005, gas flaring was reduced from 171.4 Bcf to only 75.8 Bcf. Pemex states that this reduction trend was associated with the incremental improvement of compression capacity at its production sites. But from 2006 onwards, flaring once again skyrocketed, reaching a peak of 525 Bcf in 2008, and in 2009 stood at 481.5 Bcf flared. Pemex puts this huge increase in gas flaring down to increased production in the oil-gas transition zone, and the increased need to send sour gas to the burners.

By far the most difficult region for Pemex to face the challenge of reducing gas flaring is at Cantarell, which accounted for 85% of the company’s flaring and venting in 2009, with only 10% coming from other E&P activities.

Flaring causes environmental hazards that have both global and local implications. The burning of natural gas releases carbon dioxide (CO2) and methane (CH4), greenhouse gases responsible for increasing the planet’s temperature. Additionally, it is believed that on a local level, the flaring of gas can cause local environmental problems, such as acid rain. 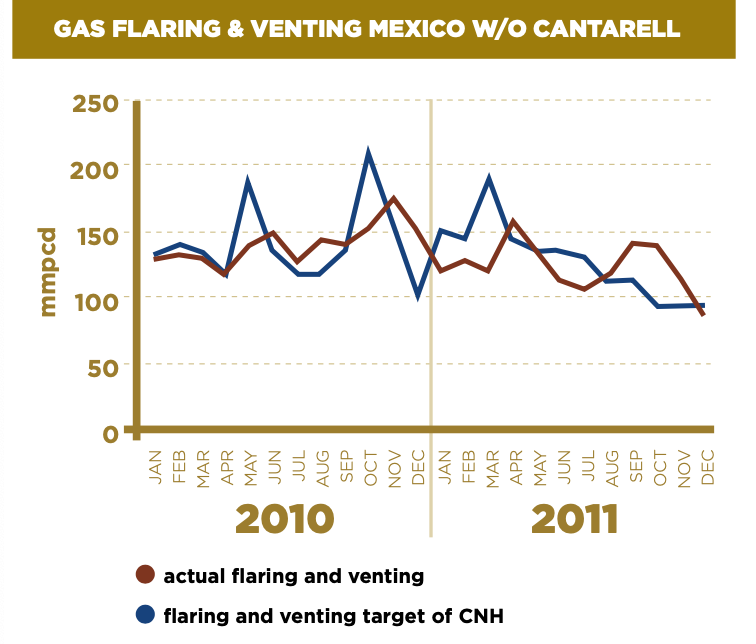 As well as the environmental implications, flaring also wastes a valuable resource. In the past, associated gas was seen simply as a hurdle to achieving optimum oil production. However, given the potential today of using associated gas for enhanced oil recovery programmes, and the drop in technology costs to harness associated gas, it is no longer a mere inconvenience to dispose of.

With Mexico holding the 2010 United Nations Climate Change Conference, reduction of the country’s gas flaring became a political priority. Although gas flaring only represents around 1% of global carbon emissions, this amount equals about 1/3 of Europe’s annual demand for gas. At its 2008 peak, Pemex flared as much gas as Poland consumed during the entire year.

As theCantarell field has matured, Pemex has produced more and more associated gas. The company faced two choices: either slow production to bring flaring down to infrastructure built at a time when natural gas was seen specified limits, or maintain oil production and flare the gas. In many cases, one of the biggest issues is out-dated more as a burden than a resource. The large figures have also been blamed on the high nitrogen content in the gas produced at Cantarell (which makes processing more actual flaring and venting challenging), as well as operational problems regarding the available offshore compression equipment. 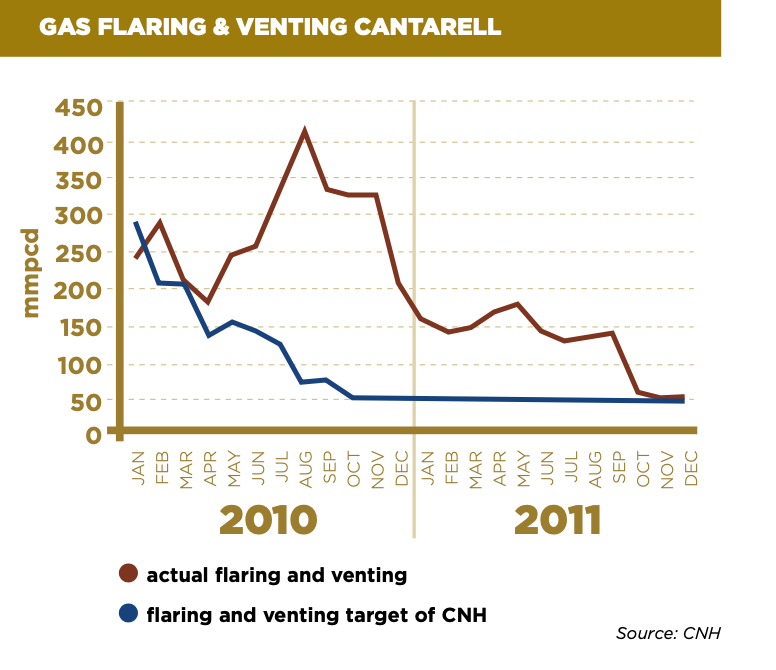 It was the newly-created CNH, Mexico’s oil and gas regulator created by the 2008 Energy Reform, that has led the country’s drive to reduce the occurrence of gas flaring. In 2008, the amount of gas flared in Mexico equalled 17% of the country’s total annual gas production. In order to reduce carbon emissions and improve efficiency, the CNH demanded that Pemex reduce this figure to 2% of production by 2012, and 0.6% by 2024.

Commentators viewed this confrontation between the CNH and Pemex as the first real test of the new regulator’s authority. They also worried that with an issue like gas flaring it would be very easy for Pemex simply to ignore the regulator’s wishes; given the huge need to increase production in Mexico, environmental concerns would take a back seat. It seems that initial doubts were unfounded; Pemex indeed launched a strategy to reduce its flaring, and so far the results seem promising. According to the CNH, the utilization level of gas in Cantarell has increased from 79% to 96.5%, from the time the CNH issued the regulation to reduce gas flaring in 2009 until October 2011. For 2012, the CNH requirements for the average annual gas utilization in Cantarell is 97.5%. In terms of volume, an average of 132.6 Mcf/day (3.75 Mcm/day) of gas was flared in Cantarell in the first 11 months of 2011. For the same period of time, once the gas flared in the rest of the fields is added, the average national gas flaring volumes amounts to 259 Mcf/day (7.3 Mcm/day). In comparison, the average gas flaring volume in Cantarell during 2010 was 281 Mcf/day (7.96 Mcm/day).

In order to address the problem, Pemex announced it would invest US$2.4 billion in a programme to reduce emissions. Figures from 2010 showed that Pemex had managed to reduce its flaring by more than 50% as compared to 2008; it as a welcome achievement in time for the COP16 conference which took place in Cancun that year. The plan involves updating facilities and reinjecting gas into the fields in order to cap gas flaring at 2% of output by 2012.

Despite its gas flaring problem, Mexico is by no means the world’s worst offender. The World Bank’s figures for 2010, collected from satellite data, place Russia as the country that flared the highest volume of gas: 1.2 Tcf. Russia stands a long way ahead of Nigeria, in second place, which flared 536.8 Bcf of natural gas in 2010. Mexico was 11th in the world in the same year, flaring 88.3 Bcf, ahead of Iran, Iraq, Algeria, Angola, Kazakhstan, Libya, Saudi Arabia and Venezuela.