Senator David Penchyna inaugurated the summit with a speech that both praised and explained the benefits of the Energy Reform, claiming that the summit provides a great opportunity to think about the current state of the country. He emphasized that the Energy Reform is one of the most important legislative changes Mexico has seen in the past 60 years because it replaces an obsolete model with one that will maximize Mexico’s hydrocarbons potential.

“There are representatives of both national and foreign companies in this room that are interested in Mexico’s business opportunities. The old monopoly model did not allow the flow of foreign investment, but now there is judicial certainty.” Penchyna also noted that Mexico cannot be isolated from the models that operate in the rest of the world; therefore the Energy Reform provides adequate international standards that allow for better economic development.

The President of the Senate’s Energy Commission explained that a trait of contemporary democracies is an often limited ability to reach agreements at the legislative levels. “After 15 years of failed attempts to restructure the energy sector, the country’s political forces decided to stop blaming each other and work to reach agreements instead.” He claims the “Pacto por México” led to two-thirds of Congress approving the Energy Reform, and the number of reforms passed in the last 18 months surpassed the number of reforms passed in the past 25 years.

Addressing those who oppose the Reform, Penchyna said: “It would be enough to read the Constitution to see that no one is selling Mexico’s oil reserves; we are simply creating a competitive model to maximize the energy sector.” He highlighted that the ongoing debate on the secondary legislation comes from constitutional premises that have already been approved. The Constitution points out strategic sectors that are under the government’s economic regulation. In this sense, Penchyna urges legislators to be critical and to understand the regulatory framework being crafted with the secondary laws. “Back in the 1990s, the reforms on the telecommunications sector did not result in an appropriate legislative framework, which led to a monopoly. We took chances in opening this sector and we did not do it properly. Mexico now has little if any competition in this area and the monopoly does not provide the Mexican people with services similar as those offered in other countries. This was a valuable lesson for legislators and policymakers, and this will definitely not be the case for the energy sector.”

Senator Penchyna mentioned more cases in which opening a sector backfired and detailed how these lessons were applied to the Energy Reform. He noted that Mexico, as a society, is not used to liberalizing its industries and many actors take advantage of this resistance for political purposes. The senator stressed that the government does not want to impose partners on PEMEX; what it wants is a transparent sector where years of corruption can be fought through healthy competition, which will only yield results through a solid regulatory framework.

The forum continued with a presentation by SENER’s Director General of Investments, Gabriel Heller, whose presentation dealt with the opening of the oil and gas industry. He began by saying that there is external investment coming to Mexico, but there is also interest in seeing what the domestic market will bring to the table, particularly regarding SMEs. “We should help national SMEs become highly important enterprises that can someday both export their technology and expand overseas.” He stressed that the Energy Reform seeks free competition in which the productive enterprises of the state can participate with other NOCs and IOCs in equal circumstances. This will be achieved by the creation and empowerment of flexible, independent government agencies that give companies legal certainty.

Heller talked about the upstream segment, saying that in Round Zero, PEMEX already gave SENER a list of the fields it would like to keep or develop. In the upcoming Round One, both private and state companies will participate in tenders. However, Heller said that there are discussions regarding the possibility of a pre-qualification round as not all contracts will be the same. “Each contract will have its own rules and the winning company will be the one to offer the best conditions. We are now implementing a process that is new to us and that makes transparency an extremely crucial factor.” Heller says the new scheme will seek 25% of national content annually in E&P projects. The percentage will vary according to each contract. For instance, deepwater projects will seldom require high national content, but the percentage will be leveraged in mature fields and shallow waters.

He explained that in the new model, oil revenues equal to 4.7% of the GDP will go to public expenditure, remaining profits equivalent to 3% of the GNP will go to a long-term savings fund, and the rest will be destined to social programs.

Regarding midstream, Heller reminded the audience that after the Reform industrial transformation is no longer considered a strategic sector. This means PEMEX is no longer the sole responsible party and SENER can grant permits to private actors. He mentioned how the National Center of Natural Gas Control (CENAGAS) has already contemplated expanding infrastructure for transportation and storage. This agency has 18 works for natural gas transportation planned for 2018, involving 10,000km of pipeline and an investment of US$13.3 billion. “We expect these developments to be ready by 2018. This network will be one of the country’s industrial motors.”

Heller talked about gasoline and diesel, telling the audience that he, in representation of SENER, does not feel that the current infrastructure fosters competitiveness. As part of the transition that accompanies the Energy Reform, a maximum price for gasoline will be gradually established from 2015 until 2019. Nonetheless, gasoline prices will adjust to inflation during this period. According to Heller, prices will be liberated and guided by international, markets in 2020. “In 2017 we will start seeing gas stations of foreign companies selling PEMEX products but with differentiating factors. They might import their products, but we will stick to the maximum price scheme until 2020,” explained Heller. 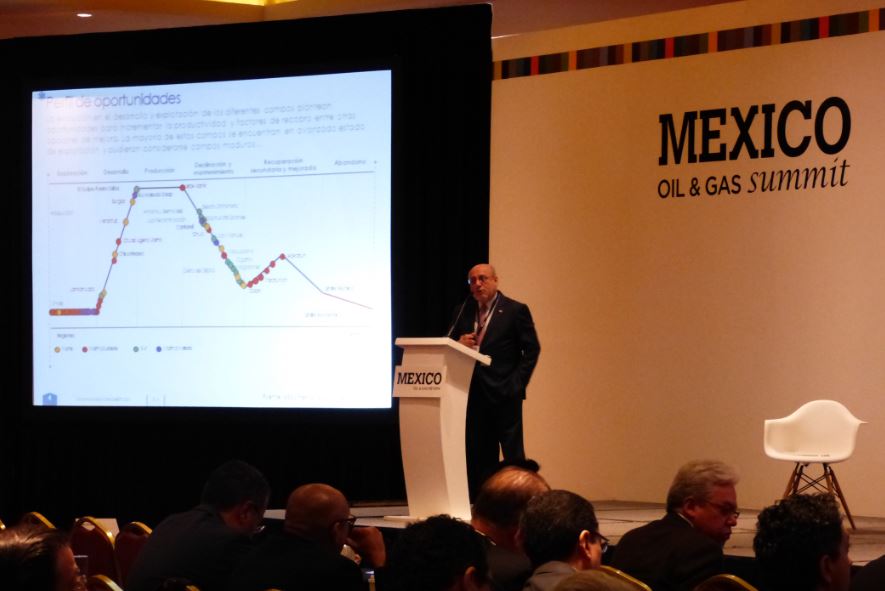 Luis Vielma Lobo, President and Director General of CBM Ingeniería Exploración y Producción drew on his extensive experience across Latin America to praise Mexico’s Energy Reform. He said that both he and other senior oil executives had been surprised by the depth of the Energy Reform and said it surpassed similar efforts seen in Colombia and Ecuador. He said that the optimism shared by these executives is a powerful symbol of the intentions of their companies, and others, to participate in the Mexican oil and gas sector.

Vielma Lobo pointed to SENER studies that placed Mexico in the top 5 countries worldwide for shale gas and oil. These opportunities are bound to attract a lot of international capital, so CBM is now part of the efforts to match Mexican fields with the technologies they need. “For example, mature fields do not need complex technology, medium technology is used for associated fields like Chicontepec, and finally, the challenges associated with deepwater require the most complex technology,” said Vielma Lobo.

He explained that Mexico’s recovery factors are below those of US fields, showing the need for improved recovery techniques. He provided the example of fields containing shale gas, where companies will look for sweet spots with a substantial accumulation of resources. Seismic studies, such as those that implement 3D technology, will be the key to finding these sweet spots.

The right drilling technologies must also be taken into consideration, given their environmental impact. In the US, certain states have harsher regulations, impacting the location of clusters and the ability to fracture wells from the start to improve efficiency. As such, Mexico will have to measure how and where these should be deployed, to avoid unpleasant environmental side effects.

The third kind of technology is associated with deepwater sites. Given the amount of investment needed to drill in deepwater, 3D scanning and imaging technology play an important role in helping companies strike the jackpot from the start. Vielma Lobo pointed to Petrobras as having pioneered drilling solutions to avoid unnecessary steps, and when dealing with tricky geologic formations. Robotics have also allowed the development of subsea facilities that outpace conventional methods. “All these technologies are looking to maximize the value creation for anyone who wants to invest in these regions,” he said.

As such, SENER and CNH have to match operators with companies to generate the best profit and yield possible. Leading third-party companies are already experts in extracting shale gas from reservoirs due to their experience, according to Vielma Lobo. “They know from the outset how to define the spacing of clusters, the well architecture, at what speed to extract, and how to be environmentally and socially responsible. These elements are what will make the difference. The design must be done immediately to allow for injection methods and artificial lifting of heavy oil to be possible. Mexico has a wealth of expertise for such operations, but the challenge is to understand the characteristics of each particular well in a variety of fields.” For Vielma Lobo, the availability of drilling equipment and of new facilities matching those of PEMEX will prove seminal in creating the right spirit of competition in post Energy-Reform Mexico.