A key moment in Pemex’s history came in 2004. The Cantarell field, which began production in 1979, had helped Pemex become one of the world’s largest oil producers and generated almost half a trillion USD in revenue for the state oil company. However, 2004 was the year that Cantarell’s production peaked at 2.14 million bbl/day, at which point it constituted 63% of Mexico’s total crude production. Production at Cantarell has since declined rapidly to a production volume of only 449,000 bbl/day in 2011, equal to 18% of Mexico’s crude production. Such a steep decline made it clear that Pemex would have to plot a new trajectory if Mexico wished to remain a net oil exporter and its national oil company a significant player in the international oil and gas industry in the years to come.

It was under these conditions that in 2010, the CEO of Pemex, Juan José Suárez Coppel, presented the new strategic plan for Pemex. This plan was devised to take the company through to 2024 and address the key challenges that Pemex must overcome given current circumstances. Suárez Coppel identified Pemex’s upstream challenges in 2010 as the following: first, Pemex had seen a steep decline of oil reserves and limited exploratory success in recent years. Second, crude that was being produced was mainly coming from mature fields. Third, the costs and complexity of upstream projects was on the rise. Finally, Pemex lacked the technological expertise and access to international production methods to address some of these issues. Pemex put in place an upstream strategy to initiate a drive to increase its hydrocarbon reserves in order to ensure the company’s longterm sustainability. He furthermore aimed for Pemex to reverse the negative production trend and return to positive annual production growth as a means to satisfy the demands of the Mexican market and the country’s Finance Ministry.

As of January 2011, according to Pemex figures, the company’s proved reserves stood at 13.79 billion barrels of oil equivalent (Boe), 61% of which are located oshore. Pemex estimates that current 1P reserves have a life of 10 years while the estimated life for 3P reserves is 31.1 years. With major producing fields such as Cantarell and Ku-Maloob-Zaap facing an inevitable decline in the medium term, Pemex is understandably keen to address its reserve replacement ratio, which stood at only 23% in 2004. The company achieved a 1P reserves replacement rate of 101.1% in 2011, which the company intends to keep above 100% in the foreseeable future.

In order to maintain its reserve replacement rate on a plateau until 2024, Pemex will first aim to increase the level of proven reserves at existing fields such as Ku-Maloob-Zaap and Chicontepec; in addition, evaluation of the potential of Pemex’s deepwater assets in the Gulf of Mexico will be accelerated; 3P reserves will be developed until they are of 1P standard, and finally, non-associated gas areas will be explored, which were previously not considered to be of strategic importance.

When Cantarell began its decline, Pemex’s immediate strategy was twofold: first, to slow the rate of decline at Mexico’s largest oilfield, and second to find producing fields that could gradually replace Cantarell. To some extent, attempts to stabilize Cantarell have been successful. After an initial 38% drop-o in productivity a series of measures such as nitrogen injection, major workovers and the drilling of new wells slowed the decline to 22.6% in 2010 and to 19.5% in 2011. In 2012, Pemex expects Cantarell’s production to rise from 449,000 bbl/day to 480,000 bbl/day, underlining that this mature field plays an important role in reversing Mexico’s production decline.

However, it is clear that in order to keep production in check with Pemex’s strategic objectives, production from other fields still needs to be increased. Since 2004, Pemex has been pinning its hopes on two major fields: Ku-Maloob-Zaap (KMZ), which sits adjacent to Cantarell in the Gulf of Mexico, and the onshore Chicontepec Basin. Increasingly, though, it seems as if geological challenges in Chicontepec, and the fact that KMZ already reached its planned production plateau of 850,000-860,000 bbl/day, will prevent these fields from providing the easy solution that Pemex had been hoping for. 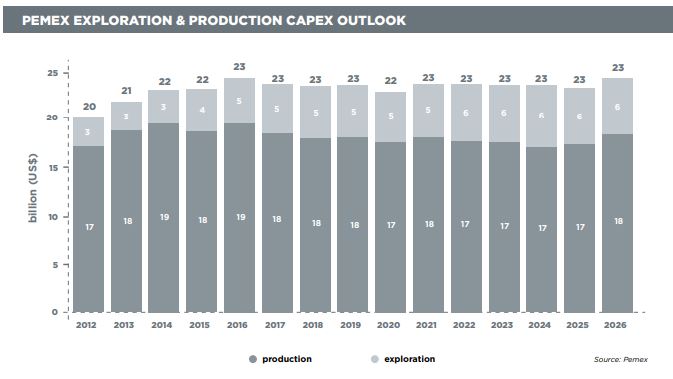 Chicontepec accounts for 56% of Pemex’s possible reserves. Another 7% are located in other various onshore projects, and 37% are located in the oshore regions. Mexico’s total estimated 3P reserves were 43.07 billion Boe. The Chicontepec onshore basin is extremely large, over 6,200km2 of challenging terrain, which poses the first hurdle for Pemex: the extensive logistical and infrastructural development necessary to optimize production at Chicontepec. The region also has extremely low permeability, as sand distribution in the basin restricts oil flow. Additionally, the oil that Pemex is producing at Chicontepec is classified as heavy crude, which poses both upstream and downstream challenges.

Deepwater exploration and production is Pemex’s final challenge and opportunity. The company says that as many as 29.5 billion barrels of prospective resources are located in deepwater locations in the Gulf of Mexico. Pemex simply does not have the operating experience at these depths: a problem faced by many NOCs in similar situations. Nevertheless, Pemex already ranks among the world’s most active players in deepwater exploration, and last year only Petrobras drilled more deepwater wells than Mexico’s national oil company. Until the Energy Reform of 2008, bringing in IOCs and international operators was not permitted in Mexico. However, things do seem to be moving forward in the NOC’s strategic plan: Pemex has now scheduled a round of integrated service contracts focused on deepwater areas for the end of 2012, the company has made significant advances in the discovery of natural gas in deepwater, and soon the development of Mexico’s first deepwater field, the Lakach natural gas field, will begin.

Brownfield development is another pillar of Pemex’s strategic plan to increase production. Many onshore fields discovered throughout the company’s operating history were less economically viable than Cantarell, and so for many years were simply left in the reserves book. This was often the case either because the technology required to overcome geological complexities, low permeability and low reservoir energy was outside the technological expertise of Pemex, or because the investments in other areas of Pemex’s reserves portfolio oered higher yields. Many of these brownfield developments lie in the Chicontepec basin, the Poza Rica-Altamira region, and the southern region. However, these challenging fields are now starting to be addressed by Pemex via a number of dierent strategies, from the introduction of field labs at Chicontepec operated by some of the world’s largest oilfield service companies, to the introduction of integrated service contracts (ISCs). The second round of ISCs was announced at the end of 2011, following what was generally considered to be a successful first round, in which three mature onshore fields were awarded to two international oilfield service companies, Schlumberger and Petrofac.