Pemex production continued to decline in 2011, although at a slower pace than in previous years. Production went from 2.58 million bbl/day in 2010 to 2.55 million bbl/day in 2011: a slight decrease compared to the steady drop in production levels since 2004, when production peaked at 3.38 million bbl/day. Between 2007 and 2009, production declined by 474,200 bbl/day. This drop was largely due to Cantarell, the once lucrative oil field in the Gulf of Mexico. In order to reverse the dwindling production trend, driven by Cantarell’s decline, Pemex turned to new projects and increased production levels in fields like Ku-Maloob-Zaap, Ixtal-Manik, Crudo Ligero Marino, Delta del Grijalva and Ogarrio-Magallanes.

Until now, production from other fields has not been able to increase Pemex’s total production, but has helped to stabilize the declining trend. In 2011, six of the new projects (including Chicontepec) reached a combined average of 1.41 million bbl/day production. According to a March 2011 Pemex presentation, Mexico’s oil production growth without Cantarell “tops any other crude oil producer in the world” and is higher than in countries such as Angola, Brazil or Canada. The most productive of these projects is by far the oshore Ku-Maloob-Zaap area o the coast of Tabasco and Campeche; in fact, it became Pemex’s primary source of production in 2009 when it surpassed Cantarell. Average Ku-Maloob-Zaap production was 842,519 bbl/day in December 2011, accounting for around 30% of the NOC’s total production.

Pemex’s goal is to continue increasing production from most of these fields. For Ku-Maloob-Zaap, however, the company announced in January 2011 that the challenge was to maintain a production peak of about 850,000 bbl/day for six years. Overall, Pemex aims for a crude production of 2.6 million bbl/day in 2012, reaching 2.8 million bbl/day in 2016, according to its 2012-2016 business plan. Looking forward, the Crudo Ligero Marino project includes fields like Tsimin or Xux, light crude oil discoveries with promising 3P reserves that are expected to boost production. 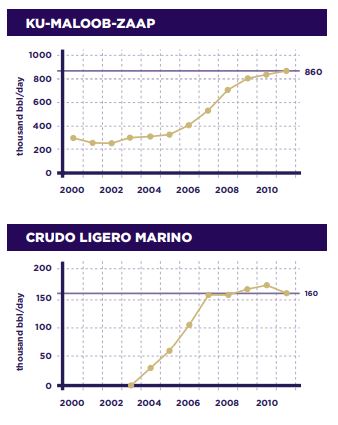 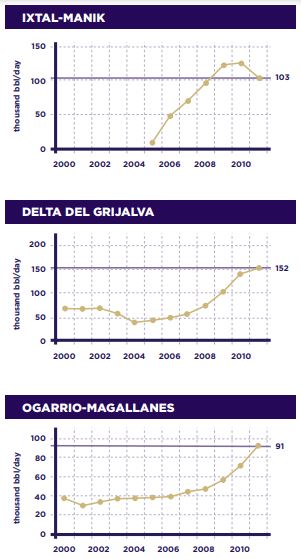