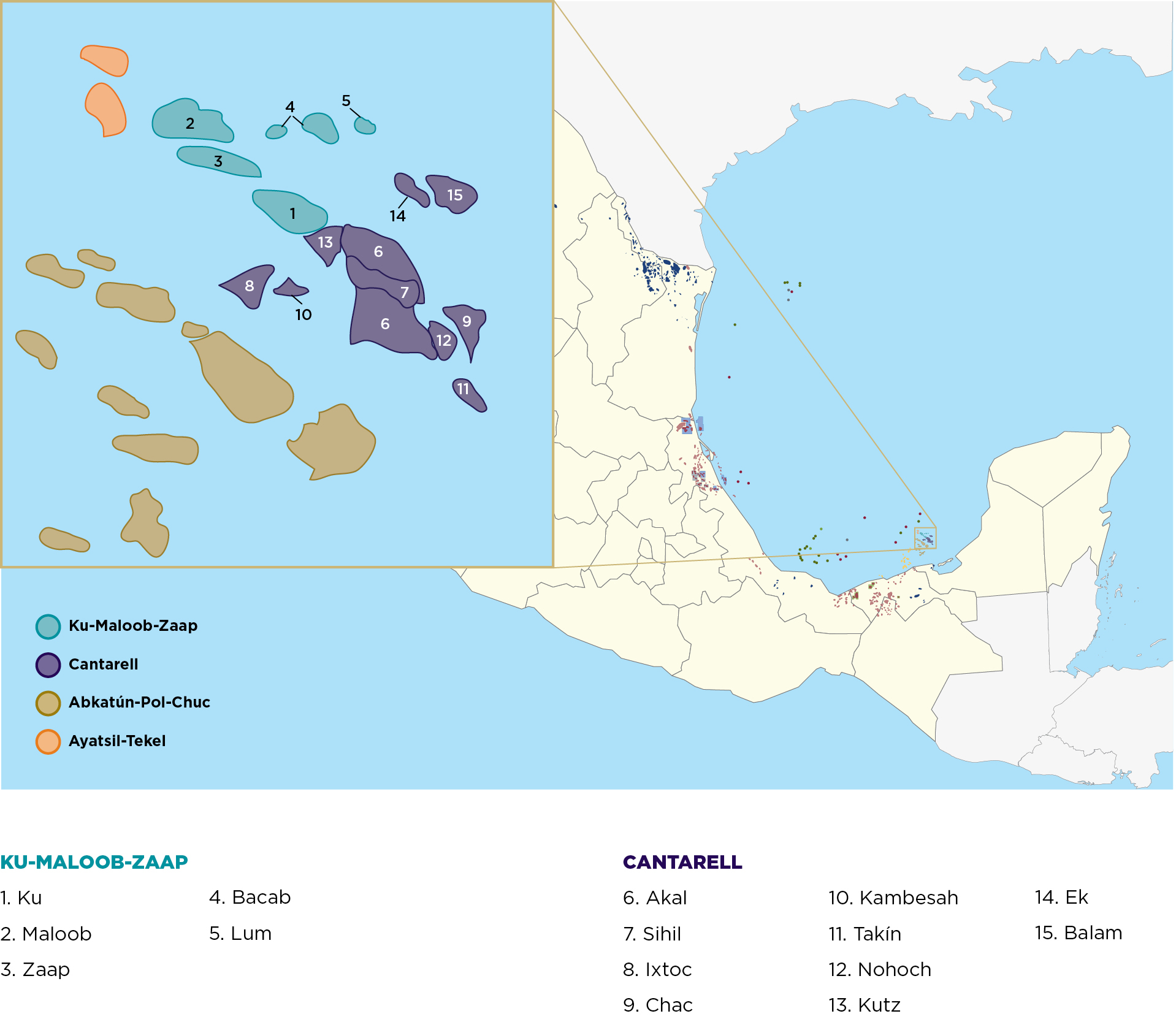 With a current production plateau of 860,000b/d, KuMaloob-Zaap (KMZ) is Mexico’s largest producing field for the fifth consecutive year. Initially discovered in 1979, it is located 100 to 120km northeast of Ciudad del Carmen and is part of the Gulf of Mexico’s continental shelf. KMZ has five producing fields – Zaap, Maloob, Ku, Bacab, and Lum – that produce oil with an API ranging from 11° to 28°. KMZ accounted for 66.26% of the production in the Northeast Marine Region, 45.55% of total offshore output, and 34.25% of PEMEX’s total oil production. As of January 2014, KMZ had 3.86 billion boe in 1P reserves, consisting of 3.53 billion barrels of oil, 54.62 million barrels of condensate, and 1.47tcf of natural gas. This accounts for 28.72% of the total proven reserves in the country, 46.95% of the total proven reserves offshore, and 63.79% of the total 1P reserves of the Northeast Marine Region. Natural gas production at the KMZ complex accounts for about 28.67% of the total Northeast Marine Region’s production, where Cantarell continues to be the largest producer of natural gas representing the remaining 71.33%. KMZ produces a mere 6.35% of PEMEX’s total gas production.

Geologically speaking, the KMZ complex encompasses a stratigraphic column that covers Late Jurassic dolomitized and fractured carbonates, Late Cretaceous carbonate breccia, and Middle Eocene calcarenites. The carbonate breccia is the formation responsible for the overall productive success of the five fields. This formation contains the oil-bearing stratigraphic and structural traps that have been the basis of KMZ production success over the past five years, during which it overtook Cantarell as the country’s largest oil producer. Additionally, the youngest geochronological formation, the Middle Eocene calcarenites, also represents an excellent source of hydrocarbons that may be of increasing interest to PEMEX. Challenges in the specific geological characteristics of the oil and gas reservoirs have made the extraction process an intricate endeavor. The gas-oil and oil-water contacts are delineated by the hydrocarbon-bearing formations and their stratigraphic relationship is set as gas-oil-water from top to bottom. The complexity of this reservoir has made PEMEX develop specific strategies to extract each of the natural resources present in its reservoirs. By maintaining pressure levels and applying EOR techniques, such as nitrogen injection, the company has prevented the oil-water contact from migrating stratigraphically. As a result, production has remained stable through the use of best practices and the technologies applied have proved their effectiveness.

Ongoing targets at KMZ have stemmed from the lessons learned at Cantarell due to the geological similarities shared by the two fields. New technologies and processes that have been applied to the complex include smart well completions in order to reduce maintenance costs, residual gas injections to increase the recovery factor by 2%, and long-term EOR projects, primarily carbon dioxide and nitrogen injection. These objectives are part of the reservoir management plan for the Northeast Marine region, which incorporates a variety of techniques and tools that aim to fit the specific geological and technical needs of the complex. In addition, a recent discovery was made during 2013. PEMEX found light oil in a Late Jurassic reservoir at its Tson-201 well, reporting an initial production of 2,907b/d and 0.7mcf/d. KMZ’s production is expected to start declining around 2017. PEMEX E&P has established a development plan which aims to keep production rates at their current levels throughout the 2013-2017 period.

Cantarell is Mexico’s second most productive asset and has long been Mexico’s main producing field. In terms of output, Cantarell represents 29.12% of oil production in PEMEX’s Northeast Marine Region and 20.02% of its total offshore production. Cantarell is a mature field that has experienced declining production since its production peak at the end of 2003. Nonetheless, this important field still boasted production of 379,674b/d in 2013, representing 15.05% of Mexico’s total oil production. However, throughout the year, production declined by 9.61%, going from 391,830b/d in January 2013 to 354,673b/d in December 2013, despite the forecasted stabilization at around 400,000b/d. The production drop was mainly driven by declining production of the Sihil field, which lowered its outputs from 120,212b/d at the beginning of 2013 to 86,298b/d at the end of the year. Since then, Sihil’s production dropped to 70,427b/d by March 2014. Cantarell produces 1.002bcf/d of natural gas, making up a significant 70.94% of total natural gas production in the Northeast Marine Region and representing 15.72% of Mexico’s overall natural gas production. While Cantarell currently maintains its position as the second largest gas producer in the country, this ranking is under threat as production decreased by almost 2% throughout 2013.

The Cantarell project consists of several fields, of which Akal, Sihil, and Ixtoc are the largest producers. Akal contains more than 83% of its total proven reserves and produced 203,276b/d and 921.39mcf/d of gas during 2013. Ixtoc, on the other hand, saw a 20% increase of oil production during the year from 25,367b/d in January to 30,485b/d in December. Kambesah started production in February 2013 and after yielding an initial 3,890b/d and 1.80mcf/d, Kambesah reached 24,233b/d and 11.19mcf/d finished by March 2014 and is therefore making an increasingly important contribution to slowing the production decline of Cantarell. Cantarell’s total 1P reserves as of January 2014 stand at 2.03 billion boe, including 1.77 billion barrels of oil, 15.86 million barrels of condensate, and 1.21tcf of natural gas. This amounts for 14.91% of the total 1P reserves in the country, 24.38% of the total 1P reserves offshore, and 33.12% of the total 1P reserves in the Northeast Marine Region.

In geological terms, the fields in Cantarell are composed of a stratigraphic column that covers Late Jurassic dolomitized and fractured carbonates, Late Cretaceous carbonate breccia, and Middle Eocene calcarenites. The reservoir is characterized by gas-oil-water contacts, where the carbonate breccia is the formation responsible for the overall productive success of the complex. However, more recently, Jurassic and Cretaceous formations have been explored and developed to continue stabilizing Cantarell’s production decline.

While Ek-Balam is part of the Cantarell Asset, and is managed by PEMEX’s Cantarell team, the field’s production is generally not included in the production of the Cantarell field. Ek-Balam is a field that is at its second stage of development and reached an average production of 60,146b/d of oil and 5.561mcf/d of gas during 2013. This is expected to increase up to around 100,000b/d, due to the discovery of a Jurassic sandstone reservoir that was calculated to hold than 500 million barrels of reserves of 26°API oil in 2013. The production coming from this discovery is being gradually added, which is why the field saw a production increase of 11,830b/d of oil and 3.08mcf/d of gas throughout 2013.