With the decline of Cantarell, Pemex was forced to decrease its dependence on the field and set out in search of a strategy that could stabilize the country’s production levels. Part of this strategy is the diversification of Mexico’s crude oil production, which involves Pemex placing more focus on smaller oil fields in an attempt to boost their production levels, and a little less focus on Cantarell.

Pemex’s eorts have not been in vain as Mexico’s dependence on Cantarell has significantly decreased. In 2004, Cantarell was responsible for more than 63% of the country’s total production, a figure that today stands at only 19.6%.

“That is a big achievement for us. If I would have to describe our strategy in one word, it would be ‘diversification’,” says Carlos Morales Gil, Director of Pemex Exploration and Production. He points out that contrary to popular belief, the production decline at Cantarell was expected by the NOC. “The good thing now is that we have a diversified portfolio,” Morales Gil says. The new fields in development saw their production rise, stabilizing the overall production level and significantly increasing their importance within the total production figures. “Taking Cantarell aside, we have the highest production growth rate of any operator in the world,” he explains.

Ku-Maloob-Zaap, for example, is currently Mexico’s largest producing field, corresponding to 33% of total production in 2011, but represented only 9% of Mexico’s production in 2004, according to Pemex statistics. Fields qualified in the graph as ‘others’ have also augmented their contribution to the overall figure. These fields represented 6.7% in 2004, but now correspond to 16.6% of 2011 crude production. This sector includes the Delta del Grijalva field, whose production increased 164% since 2003, reaching 155,000 bbl/day in 2011, and the Ixtal-Manik field that reached 125,000 bbl/day in 2010.

Pemex’s attempt over the last two years to boost oil production at other fields also resulted in substantial production growth. According to company figures, the compound annual growth rate for Mexican crude-oil production from 2005 to 2010, excluding Cantarell, was 9.2%, or a total increase in daily production of about 720,000 barrels.

Edgar Rangel Germán, the Commissioner of the CNH, sees the logic behind Pemex’s diversification tactic. In his words, “If you have a supergiant that is declining, then  you have to substitute it with another supergiant, a few giants or many smaller fields.” At this moment, the country is lacking a supergiant that could replace Cantarell but Pemex is witnessing a steady production growth thanks to Ku-Maloob-Zaap and several other smaller fields.

Although a victorious sentiment surrounds the NOC’s current figures and achievements regarding a boost in production at other fields, the country’s overall oil production is still down nearly 800,000 bbl/day from where it stood before the decline of 2004.

For coming years, Pemex plans to expand its diversification of oil production on a larger scale and stabilize the country’s overall production numbers by creating a platform where various fields are exploited, if not equally, then similarly. A production platform where the NOC incorporates lessons learned from past experience and to avoid heavy dependence on specific fields like Cantarell and KMZ. 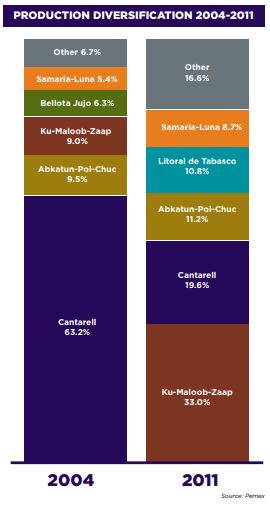