Leading the Industry in Reserves Replacement

“ExxonMobil continues to lead the industry in reserves replacement,” Rex Tillerson said in a press release announcing the company’s reserve replacement results for 2010. “Our strategic focus on quality resource capture, a disciplined approach to investment and excellence in project execution have resulted in replacement of more than 100% of production for 17 consecutive years. These reserve additions will enable ExxonMobil to develop new supplies of energy to meet future demand and support economic growth and improved standards of living.”

One of the key targets for any large oil and gas producer is to ensure that the company’s resource levels held in reserve are topped up annually, in order to ensure that the company can continue to produce at similar rates in the years to come, and to assure investors that the business is being run in a sustainable fashion. As a result, in tandem to production, every oil and gas company must make exploration a continuous priority in order to ‘prove’ reserves in areas where oil and gas discoveries are expected, but not proven. ExxonMobil undoubtedly leads the pack in maintaining a high reserve replacement rate. For almost two decades the company has kept its reserve replacement level above 100%, meaning annual net increases after production.

In 2010, ExxonMobil announced the best figures for reserve replacement since the 1999 merger between Exxon and Mobil. The company replaced 209% of production by adding 2.5 billion Boe to the books. Successes in exploration have come from a diverse portfolio of dierent oil and gas plays around the world. Firstly, the boom in unconventional resources in North America has greatly added to Exxon’s portfolio, and the acquisition of XTO added 2.8 billion Boe of unconventional North American reserves to Exxon’s books. The company also had 2010 exploration successes in Russia at the Sakhalin-1 project, in Nigeria oshore in partnership with Total, and on the Norwegian Continental Shelf.

The company also saw success in its development of shallow water fields in Abu Dhabi, adding to the company’s reserve total for the year. The company has invested significant amounts into exploration. In 2010, the company reported it had spent US$32.2 billion in exploration and capital expenditures. ExxonMobil points to a number of factors for its consistent success in replacing its reserves, but the main thrust is diversification of assets – a good mix of projects’ geographic locations, a number of dierent partners, and a mix on the books each year of new discoveries, extensions to existing fields and new techniques to improve recovery on mature assets, which enable the company to increase the amount of reserves booked on site. The fact that such a high priority has been given to reserve replacement also means that today ExxonMobil is able to reap the rewards of its focus.

Not all companies have such an unblemished record when it comes to reserve replacement. In 2004, Shell disclosed that it had overestimated its proven reserves by 20% in its 2002 annual reporting, meaning that when the company reported its reserves for 2003 they were 3.9 billion Boe lighter than the previous year. As a result of this debacle, 7% was knocked o the value of the IOC’s shares, the company was fined £17 million (US$27.09 million) by the British Financial Services Authority, and the Chairman of the company, Sir Phillip Watts, left the company. In 2007, a lawsuit resulted in the payment of US$450 million to non-US shareholders of Shell. At the time of the announcement that the company had overestimated its reserves, the IOC was accused of being overaggressive with its reserves bookings. At fields like Gorgon in Western Australia for example, the company booked an undisclosed amount of reserves, despite the fact that other partners in the project had not yet added the project to their reserve bookings.

In Mexico, Pemex evaluates its own reserves, and its results are then certified by a third party. Once these two opinions on reserves has been reached, the CNH, Mexico’s oil and gas regulator, approves the final numbers. In theory, this should be a smooth process, but in 2011 Pemex and its third party reserves certifier had a dierence of opinion on the extent of the reserves in Chicontepec. In the end, the CNH published the reserves figures of the certification company, which placed significantly fewer hydrocarbons in the Chicontepec basin than the NOC. 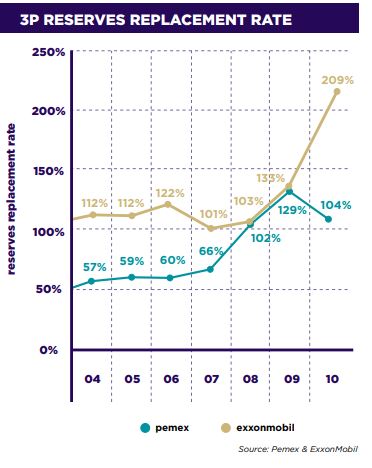