Q: What has Mexico done so far in terms of exploration of its prospective resources?

A: The amount of prospective resources currently reported in Mexico is 50.5 million Boe. Mexico has twelve oil regions, dierent geological provinces that are both explored and non-explored. Today, only seven of the provinces have been explored. The others haven’t been explored yet - and exploration is needed. Among the reasons why they haven’t been explored is the lack of sucient maturity in some of the fields in terms of oil. 47% of the identified prospective resources are documented in the Database of Exploratory Opportunities, while 53% have not yet been identified. So out of the 50.5 million Boe of prospective resources, there are exploratory opportunities only in 47% of this volume.

Q: What has Pemex’s exploration strategy been historically?

A: Pemex started its exploration activities in 1943, making some light oil discoveries. The onshore exploitation of Reforma-Akal was boosted in 1972 with the oil and gas discoveries in cretaceous limestone through the wells of Sitio Grande-1 in the southern region and Cactus-1. The geophysical prospecting in the marine part of the province started in the same year and the exploratory studies peaked between 1974 and 1976 with the drilling of the Chac-1 well in the Campeche region.

Between 1976 and 1981, the Campeche region was the location of major discoveries, which led eventually to the exploitation of the Cantarell complex. This was the start of the exploitation of the most important province in the country, reaching a historical production maximum of more than 4 million Boe/day in 2004. Within the exploratory strategy for these basins, potential evaluation projects and their respective investments developed, principally for the Malpaso and Reforma projects, located in the onshore part of these basins.

Q: What is the budget for exploration this year?

Q: What do you believe should be the priorities in exploration?

A: The priorities should be data acquisition and geochemical modeling. In the Gulf of Mexico’s exploration for example, it should be the data acquisition and the interpretation of areas with saline influence and complex geology, so as to get definitions with fewer risks. In onshore fields, I would look at fields with high pressure and temperature, and the evaluation of shale gas fields’ potential.

Q: Can Pemex ever increase its production to 3 million bbl/day if it doesn’t increase the exploration budget?

A: No, it’s almost impossible. This is one of the conflicts that in a way the CNH has brought into the public eye. Exploration is the future of what can be produced in terms of oil.

Q: Do you think it is possible for Pemex to produce that amount by 2020?

A: It is going to be very diffcult.

Q: Why is there such under-investment in exploration?

A: I think that the problem here is that Pemex is given a certain budget and needs to decide where to allocate it, but there are certain compromises that an operating company must make, especially in this country - for example regarding the deadlines when they are held accountable. Also, a big part of the budget is dedicated to exploitation activities because of the need to maintain oil and gas production levels.

Given the circumstances that Pemex faces in terms of its budget approval process, it is very dicult for the NOC to think that it will give exploration a budget with an investment that will yield results within five or six years. It’s a question of deadlines and of when the company and its executives will be held accountable. It’s a problem of short, medium and long-term vision.

More investment is needed so as to be able to replace production in the medium and long-term. I cannot state a production number for tomorrow if I don’t know where to get it from and whether I’ll get it from deepwater or shale gas. For example, in deepwater there is a need for geological and geochemical modelling. The percentage of wells located in deepwater is very low, because Pemex does not have the entire data model, having not fully completed its acquisition of this data. This is because exploration hasn’t been the principal factor and investment has been low. A larger budget for exploration is needed in order to provide all the necessary support to increase the knowledge of the Mexican basins and to develop the country’s resources in the mid to long-term.

Q: What if another entity were in charge of how much budget goes to exploration?

A: I think that something like this should happen. In the end, it is very dicult for an operator to admit that production is equal to exploration. It is hard to see exploration as an investment, if one is told that the goal is to have this amount of money this year and this amount next year. The same phenomenon happens with research. If one is told that the results are needed for today or tomorrow, research somehow loses its importance.

Q: When you go to other countries, you must meet representatives from many oil and gas producing countries. What is the international opinion on how Pemex approaches exploration?

A: On an international level, Pemex is well reputed for its exploration activities. Many people think that Pemex has high quality specialists and that they have been able to conceive a very pertinent exploratory strategy, especially considering the fact that Pemex only receives a limited amount of budgetary support for exploration activities. This has led to the view among international experts that investment is lacking in Pemex’s exploration sector.

Today in Mexico, exploration activities face a big challenge given the low levels of investment in people and projects by Pemex in recent years. However, given the challenges the company has had to face in this regard, they have not done a bad job, and this opinion is shared among international commentators. 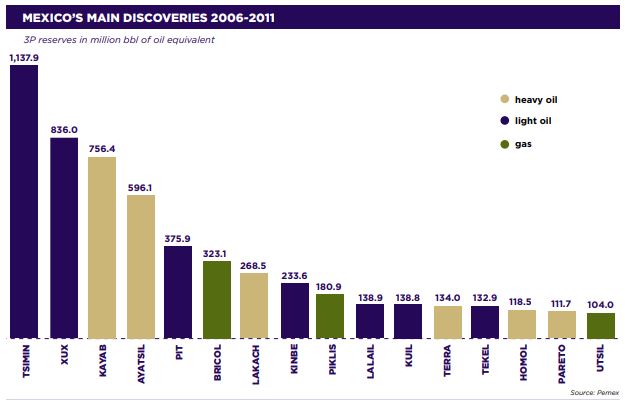 As Cantarell reached its peak in 2004, Pemex faced the urgent need to replace this field’s declining production with additional production from both existing fields and new discoveries. Over the following years, exploration investment and the reserves replacement rate rose side by side.

As the graph above shows, the company has made significant discoveries during the 2006-2011 period. Expectations for 2012 are high, as Gustavo Hernández García, subdirector of PEP, explains: “Our target for 2012 is to discover close to 1 billion Boe. Part of that will come from new discoveries, while another important part will come from reclassifying and updating our knowledge of existing reservoirs.”