Q: What are the pillars of the production strategy that PEMEX will have from this moment onwards?

A: As opposed to our previous strategy, in which we were focused on production in a certain number of fields, with Cantarell in the lead and KMZ in expanding development, we now have a diversified project portfolio. Cantarell is no longer the pillar of production that it was in the past. In 2002, we decided to launch the KMZ project along with Delta de Grijalva, Litoral de Tabasco, and some recent discoveries such as Tsimin-Xux, Yaxché, Xanab, and other lighter oil fields in the offshore areas, as well as onshore discoveries in the South Region such as Navegante and Terra among others. We were diversifying the risks of future production reduction among many fields. When taking Cantarell out of the picture, our production has increased from 800,000- 900,000b/d to over 2 million b/d over the past ten years. No other company in the world has accomplished a production increase like this. Given Cantarell’s importance for national production, its decline does have an impact. However, we removed Cantarell from the equation and then analyzed the rest of the assets. The diversification of the production portfolio helped minimize the impact of Cantarell’s decline, which is producing less than 20% of what it yielded ten years ago, reaching around 365,000b/d in April 2014.

Q: Recently, Cantarell’s production dropped from its production plateau of 400,000b/d. What happened?

A: One of the lower areas of Cantarell produced more water than we anticipated. We decided to produce less oil and manage the water extraction rather than trying to keep our production target. Production was reduced and we are still in the 360,000-370,000b/d range. According to technical benchmarks, once the production decline reaches a certain level, the output level can be stabilized. We are trying to keep production in Cantarell stable.

Q: The new field that will be adding production in close proximity to Cantarell and KMZ is Ayatsil. How does the future production of these three areas compare?

A: There is no comparison. Ayatsil’s output is heavier than KMZ’s heaviest oil. Ku produces 225,000b/d of 28° API crude, Zaap produces 310,000b/d with 16° API, and Maloob produces almost 315,000b/d of 11°-12° API. The total production of 850,000b/d therefore has an average of around 16° API, which we blend with 230,000 barrels of 37° API crude from Litoral de Tabasco to get to our commercial Maya blend with 20° API. Cantarell is 20°API, while KMZ is a blend with an average of 16°API, and Ayatsil-Tekel will be between 8-11°API. As we move northwest from Cantarell, we are finding heavier oil. This is where Ayatsil-Tekel is located as well as fields such as Pit, Baksha, Nab, Kayab, Uchukil, and several others in the Campeche Oriente project with extraheavy oil ranging from 7°-10°API. We have included those fields in our Round Zero request to SENER because there is a huge potential in terms of oil in place. Those extra-heavy oil fields located in Ayatsil-Tekel and the wider Campeche Oriente area have almost 10 billion barrels of oil in place. The technology to extract this oil is complicated and high-cost. Therefore, we would like to have a partner that provides technology and funds in order to extract that extra-heavy oil. Right now we are working with a 10-11% recovery factor, which means that if there are 10 billion barrels of oil in place we can produce 1-1.1 billion barrels, which is an important amount given the low recovery factor. We expect to have the chance to increase the recovery factor to 20-25% over time, which will represent 2-2.5 billion barrels of oil to produce. 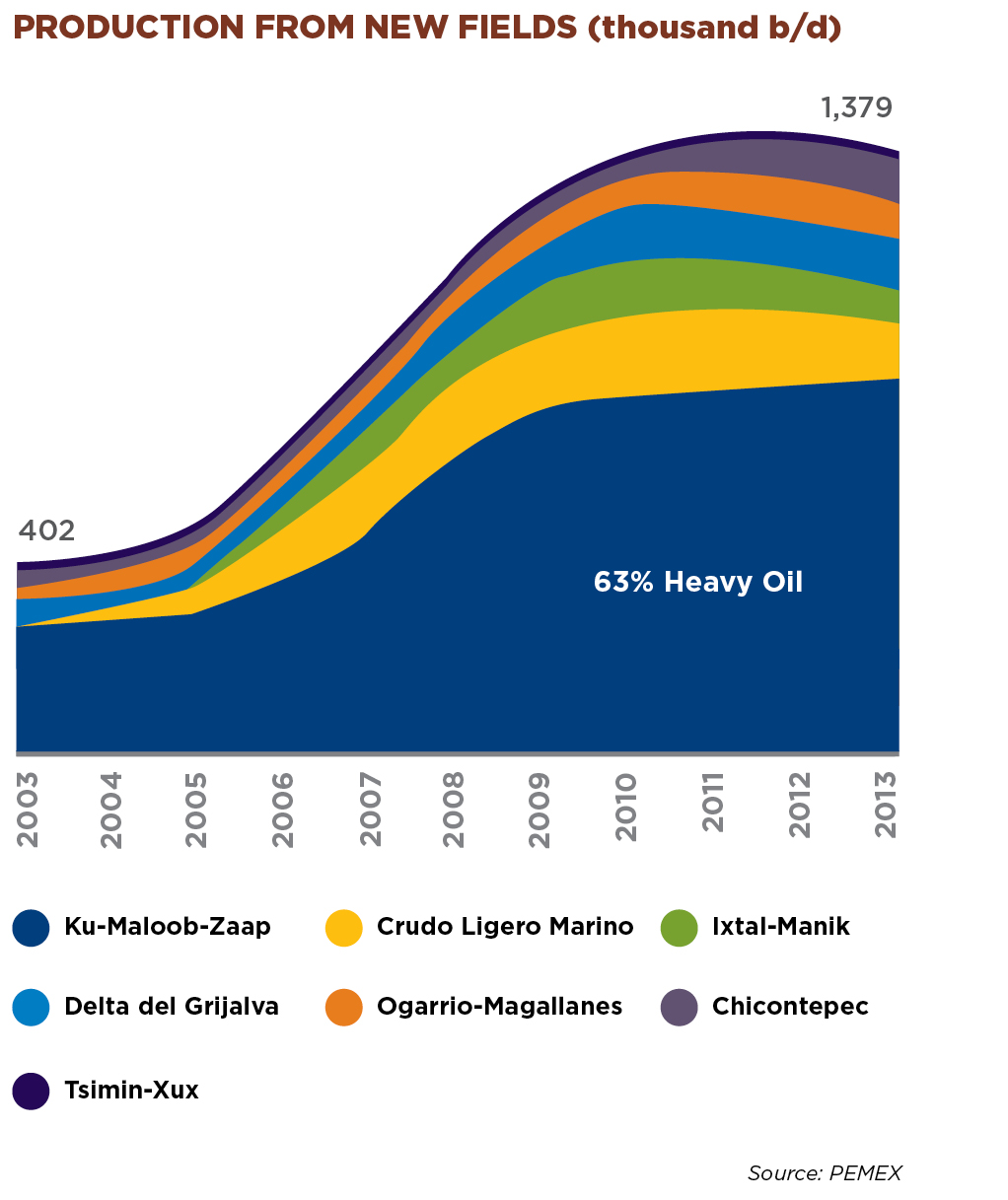 Q: Which new fields are your priorities in order to achieve increased production?

A: We apply different strategies to the different segments of our portfolio based on the types of hydrocarbons and their onshore or offshore location. We have identified large opportunities in the onshore South Region, where large fields such as Navegante and Terra will be very important, with easy-to-produce 37°API crude oil. The discovery-toproduction time in this area could be reduced to one year because we have a lot of infrastructure in this area. However, drilling wells in this area is really complex because the conditions include high pressure and high temperatures. Our strategy involves allocateing substantial resources and investment to produce crude oil in these complex areas in the South Region. In shallow water we are investing in the Litoral de Tabasco area, especially in the Tsimin-Xux fields, because these are important producers. Right now, TsiminXux is producing close to 65,000b/d of 37°API, but it is reaching acidic gas production with different characteristics from the associated gas that we produce in Cantarell and the rest of the offshore areas. It is high-pressure gas with a different composition, and we expect to increase our gas supply because Tsimin-Xux is producing more gas than expected. Tsimin-Xux and other fields within Litoral de Tabasco are important in our production portfolio.

In the Northeast Marine Region, where Cantarell and KMZ are located, we have also made important discoveries, such as the Kambesah field, just south of Ixtoc. It was found during the accident that happened in 1979. We have produced from two wells in Ixtoc for over two decades, with each well producing 8,000b/d, but the reservoir pressure never decreased. After 20 years of production we still had the same pressure, which indicated that there had to be a larger system in place. We executed new seismic data acquisition in that area and the interpretation indicated that the field is connected through an aquifer to a bigger structure. Right now we are developing the south of Ixtoc, which is the Kambesah field where we still have potential to increase production of its 32-33°API crude. This illustrates that fields other than Ku-Maloob-Zaap, Abkatún-Pol-Chuc, and Cantarell play an increasingly important role in our production portfolio.

In the North Region we discovered oil in the Veracruz area with the Gasífero well. This well was called Gasífero because we expected to discover gas, but oil was found instead. Following this pleasant surprise, we are allocating resources to develop this field, which is providing 28-30°API oil and will make an important contribution to our production profile. Nejo is another field in the North Region which we just recently converted from a funded public works (COPFF) to integral project of exploration and production (CIEP). It produces condensates, and the reservoir was thought to be a gas reservoir, but it is not, it is a condensate reservoir.

Q: Do these unexpected discoveries in the North Region mean that you still have lessons to learn about its geology?

A: When our geologists identify a prospect, they spot a basin where we can find hydrocarbons ranging from 10°- 50°API, which means that it could be producing everything ranging from gas, dry gas, wet gas, light oil, heavy oil, and extra-heavy oil. In the case of Burgos, we have identified a lot of structures of which many have gas, which is why our bet is mostly on gas in the Burgos Basin. The formation has shown us that it stores gas. It was a surprise to find that Nejo contained neither gas nor oil, it was a condensate reservoir. This is a hydrocarbon that turns into gas if you reduce the reservoir pressure. Sometimes the geology gives us nice surprises, while at other times it does not. In summary, the production portfolio of our projects is currently very diverse because we are not trying to rely too much on certain fields.