Mexico has been subject to studies and exploratory activities focused on finding hydrocarbon reservoirs since the end of the 19th century. The first commercial discovery of hydrocarbons in Mexico occurred in 1901 in fractured limestone from the Late Cretaceous in the area of PánucoÉbano, San Luís Potosí. Other discoveries were added to this one in the following years, succeeding in positioning Mexico as one of the main producers in the world.

Currently, the majority of Mexico’s oil production comes from the southeast province with its two most important fields being Cantarell and Ku-Maloob-Zaap. According to Pemex production data, this province reached its historical maximum of more than 4 million Boe/day in 2004. Its current accumulated production is 41.4 billion Boe. However, production in the southeast region is declining, which is a source of much concern, but its prospective resources still account for almost 32% of Mexico’s total resources.

The province with the highest potential is deepwater Gulf of Mexico. This area also represents the frontier to deepwater exploration. Extra-heavy oil and gas has been discovered already, with 3P reserves totalling 532 million Boe. The prospective resources in deepwater are estimated to be 29.5 billion Boe, accounting for more than half (56.40%) of Mexico’s total resources. 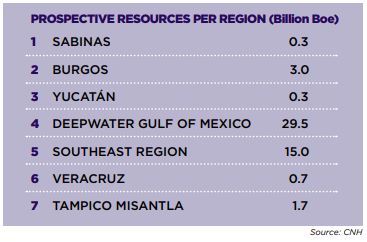