Q: How has the decision to release all the exploration data repositioned Mexico as an exploration destination, both for companies that want to produce in the future and those who want to reinterpret the data?

A: The exploration segment in Mexico advanced in the past year because of the regulatory changes and now it is well positioned to discover new resources in the near future. The Mexican exploration sector is oriented toward data acquisition and special reprocessing, which allows the possibility of playing around with the evolution of technologies and available information. At the moment, the information and processes are being upgraded with new technologies, reprocessing, and new data acquisitions.

The interest companies are showing in carrying out exploration activities is amazing, particularly in studying the Gulf of Mexico, and there is a smaller interest in exploring onshore basins. In fact, the Gulf of Mexico was the first focus of acquisition service companies. 2D seismic is being used to recognize additional areas of the Gulf of Mexico. PEMEX had acquired deepwater data, but just for areas close to Perdido and in the southern basins were the large gas reservoirs were identified. Now companies are collecting data in the remaining areas through 2D seismic. 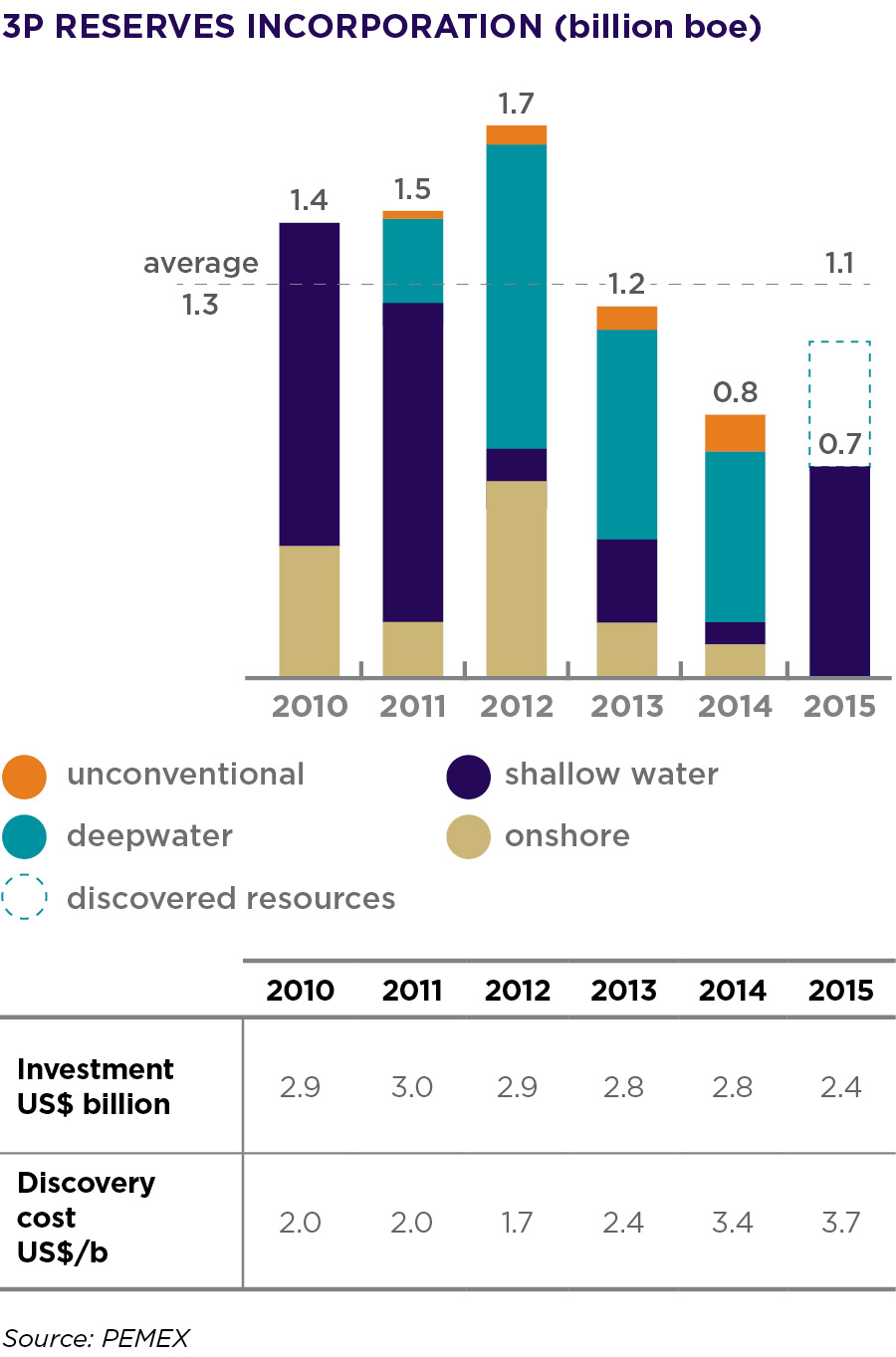 Although it might seem that there is an overlap in data acquisition activities in the Gulf, the objectives are different in each study, as some intend to examine the seabed while others are trying to determine depths. Electromagnetic studies shed light on the type of fluid combined with information from seismic and drilled wells, and hundreds of square kilometers are being explored with this approach. Geochemistry studies provide important data to improve modeling and to identify hydrocarbons in the basins. Integrated geochemical data also reduces uncertainty for companies that might be interested in deep or shallow water blocks. New results are showing something similar to Brazil’s pre-salt formations, which we will see more of in the next few months. This means that, in addition to the usual formations, there is a continuous salt layer under which there could be hydrocarbon resources. Overall, all these endeavors will allow us to have a deeper perspective on the Gulf, thus reducing uncertainty, in no more than two years.

Onshore is also more complicated than exploration in the Gulf of Mexico because operators have to carry out social impact assessments that can delay the permitting process. In addition, no large-scale studies have been made to date. Shale is another complex area because the current oil price is not conducive to production in these fields, but the Ministry of Energy will ultimately determine when the round will take place. Most of the exploration activities in the south region were given to PEMEX, and the NOC left the rest for future bidding rounds. There are also areas that have been barely explored or not explored at all, such as Chiapas and some portions of the state of Veracruz.

Since PEMEX works by asset, the intersection of several areas lacks reliable studies. Most of the onshore exploration being carried out right now consists of studies and reprocessing, although data acquisition activities are gradually increasing, changing the exploration perspective for the next few years. There are a few companies reprocessing the existing seismic information for onshore blocks, ultimately increasing the value of the information we have and saving time in improving the quality of the available data.

Q: How do you see the evolution of exploration technologies and the entry of new technologies now that the market is open?

A: The technology operators have in their R&D centers gives them a unique competitive advantage, and R&D centers also tend to go the extra mile when developing solutions to new problems. Most people think about seismic acquisition when talking about Authorization for Hydrocarbons Recognition and Superficial Exploration (ARES). However, this also entails superficial recognition studies for the exploration side. Many of these studies have employed geochemistry, gravimetric analysis, magnetometry, and geology studies used to relate already-drilled wells with seismic and the electromagnetic side, which deals with fluids. Seismic might be the most impressive aspect due to its scope, but geochemistry studies are the second most frequently requested service. For me, successful and state-of the-art technologies will be those that enable the possibility of drilling in high pressure conditions at significant water depths. If the pre-salt formations are confirmed, then the technological side will also encounter more challenges, as these characteristics will not be found in other markets. These are areas that will evolve significantly in the coming years.

Onshore presents a different scenario, as the technology used leads to increased efficiency levels in the production stage. This will be the case for shale reservoirs, which hold significant volumes. Confirming the volumes and the hydrocarbon potentials is the next challenge, as well as finding the sweet spots so that barrels do not cost US$40 each. There are seismic and characterization technologies that allow location of those sweet spots at lower costs that the ones that rule the industry today.

In the current climate, there is a play between prices and efficiency. Operators in the US are drilling natural gas wells and they are turning a profit. The price of a cubic foot of natural gas is relatively cheap, yet the US is making a business out of it and there is no reason why Mexico should not be able to develop a profitable shale industry. It is speculated that the southern region could have oil in addition to gas, which would create a more attractive business for everyone. Much remains to be explored in onshore conventional resources, which will require new technologies and creativity. Mexico is focused on the offshore resources where we knew we had resources in the Cretaceous formations, so we neglected the Tertiary formations in the southeast, which might have interesting volumes waiting to be uncovered.

Q: How has access to information evolved, and what can companies expect from the Data Room in future rounds?

A: The Data Room had to be developed because there was a lack of knowledge about the information that existed in Mexico. In fact, we had to make geological atlases. However, it was important to develop a Data Room at the initial stage to incorporate all the information needed to support technical decisions. For onshore blocks, we had to gather information directly from the asset, which is different from having integrated information, performing quality control as a single component, and managing it in advance or evaluating the missing components with sufficient time to obtain it.

The process for the following rounds will be different, since a massive data transfer is being carried out already. Future data rooms will be more improved than the ones we have today, as we will use our acquired experiences and apply the lessons we have learned. We are going to modify the membership requirements for the Data Room because the state might have information on drilled wells that will be publicly available, so having a data room for each phase will not be necessary. Information will always belong to the state and will be contained in the Hydrocarbons Information Center, but it will be available to operators. Almost 80% of the operators that want to enter Mexico will have access to the information in the next three rounds, which is the goal. It is difficult to maintain control of the data when this is not integrated and an inventory is lacking, but if we have the complete volumes, we have the chance to go over it in advance for future rounds. As reprocessing activities take place, companies will help complement the information.

Q: What are some changes the industry can expect as a result of CNH’s current endeavors?

A: ARES will be modified and a new version will be issued this year, which will include well integrity, which will look at exploration wells, deepwater drilling, and standard model wells. Another aspect relates to royalties, as the previous version did not detail how the purchase of information should be paid for. This is important to specify as clearly as possible in the new multi-client market. A company might purchase a seismic or electromagnetic block, reprocess it with its in-house technology, and sell the reprocessed information several times. In a multi-client market, if the company did not acquire the original data, it has to pay a percentage to the state.