“Pemex has experienced a huge increase in drilling efficiency in the past 24 years,” says Carlos Morales Gil, Director General of Pemex Exploration and Production. “In 1989, the company was barely able to drill a 4,000m well offshore in 280 days. By 1994, the time to drill the same well had been reduced to 70 days. Since then, we have become one of the most competitive forces in shallow water offshore drilling.” This efficiency reflects Pemex’s historical expertise, which for many years was focused on Cantarell, and later on Ku-Maloob-Zaap: these shallow water assets provided the basis for Pemex’s annual production, and so naturally the NOC focused on improving its efficiency in this type of environment.

In areas that were not historically important for Pemex, the company is making significant efforts to strengthen its drilling capabilities. “Onshore, the story is different and we are still not competitive enough,” Morales Gil admits. “We need to increase our efficiency level there over the next few years.” To do so, Pemex will continue to focus on the areas where it can leverage its world-class technology and expertise: high pressure, high temperature wells. In areas where the company is less competitive, such as Chicontepec, drilling activities have been contracted to specialized drilling companies in their entirety. “We will continue to rely on the help of service providers in the areas where we feel we need them,” Morales Gil says.

Success in drilling comes not only from expertise and improved efficiency, but also from having the equipment in place to make sure that the wells that need to be drilled, can be drilled. Morales Gil explains how a shortage of rigs available for hire, given the conditions and maximum day rates that Pemex is offering, has impacted Pemex’s drilling operations, and therefore its production rates, in recent years. “We are doing anything we can in order to gain access to the rigs we are missing,” he says. “We are basically contracting every rig that comes out of the yards, up to the point that we have managed to contract 15 additional rigs this year, but we are still 15 rigs short of the target. We expect to continue contracting with the same intensity throughout 2013 to catch up with our target. Right now, we are already in the process of securing contracts for eight, which will close half the gap.” According to Cantarell Administrator Miguel Ángel Lozada Aguilar, Pemex has set  a production target of 472,000 b/d at Cantarell. “If we are not able to hire the necessary drilling equipment, since there are a limited amount of jack-up rigs in the market, we will not be able to reach our production targets.” Lozada Aguilar is skeptical about whether Pemex will manage to acquire the necessary rigs because in the past, drilling rigs have not come to Mexico because of the company’s pricing and contracting policies, as well as international market forces.

Morales Gil is more positive about the possibility of reaching the company’s targets. “Historically, the mandate of Pemex has been to produce as much as possible as quickly as possible to increase profit for the federal government,” he explains. “However, due to the fact Pemex E&P is the pioneer within Pemex, it is not surprising they are planning five to 10 years in advance and their strategy is starting to align with the budget needed to purchase and hire drilling rigs.”

The balance in shallow water between jack-up rigs and platform rigs will increasingly favor jack-ups: Morales Gil says that out of the 90 rigs that Pemex hopes to have in shallow water in the coming years, around 60 will be jack-ups, and 30 will be platform rigs. Currently, Pemex only has 22 jack-up rigs in operation out of 53 rigs. Most of these will be contracted from other companies, rather than bought directly by Pemex: “Out of the 90 rigs that we expect to have in the following years, Pemex is planning to operate around 10 jack-up rigs and 20 platform rigs. We do not want to invest all of our capital in rigs and own the entire fleet ourselves,” he explains. “The strategy we are following is to separate drilling activities into a newly created subsidiary or affiliated company. This strategy will start to be implemented in the following months, and will help in terms of the balance sheet and the budget expenses.” This new drilling division will allow Pemex E&P to concentrate on activities other than drilling. Morales Gil hopes that eventually, the new Pemex Drilling division will compete for contracts from Pemex E&P alongside private sector companies. 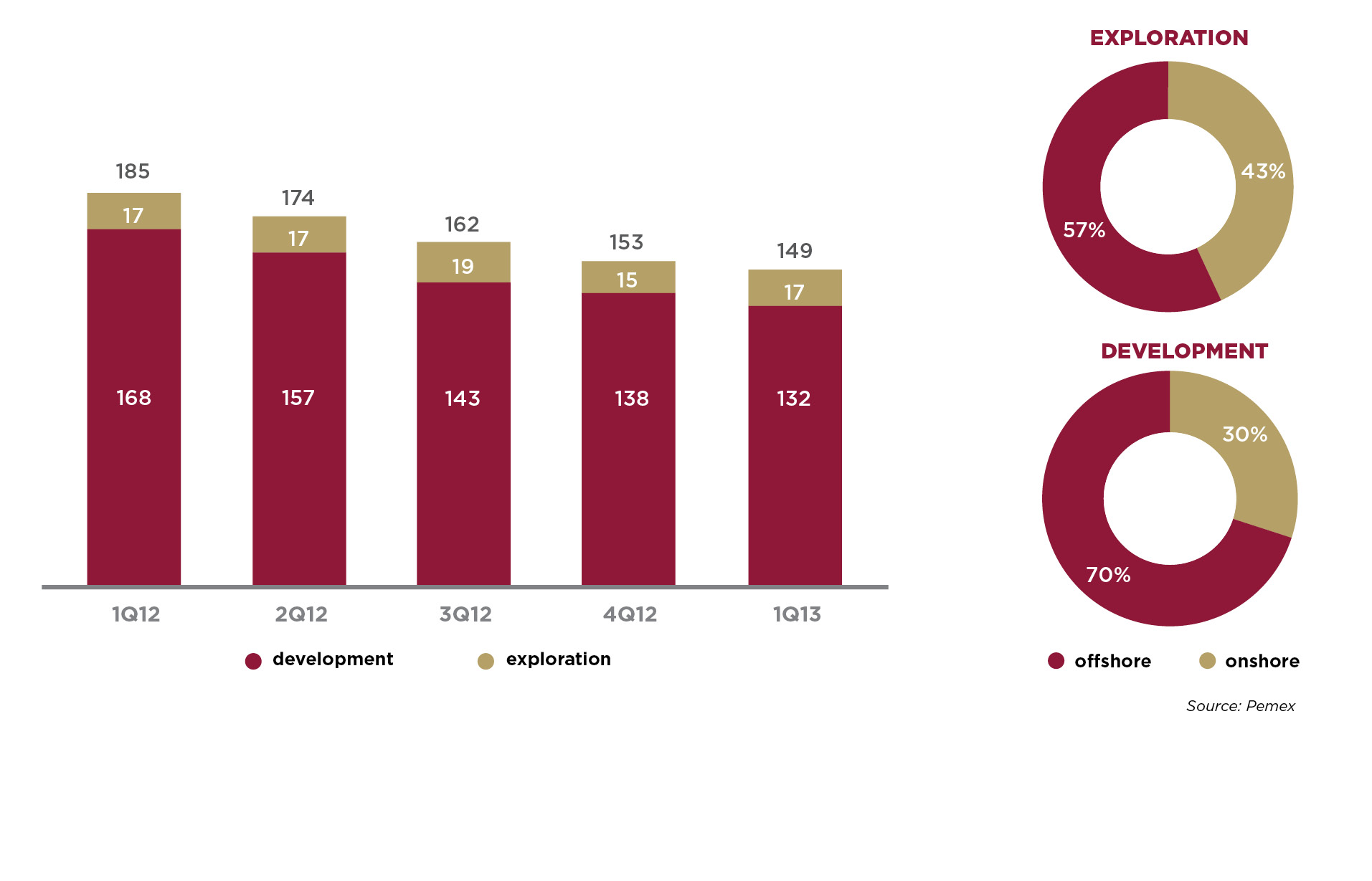 In 2009, Pemex had an average of eight exploration drilling units operating offshore throughout the year. This number dropped to an average of six in 2010, and five in 2011. The number of rigs stationed at Pemex’s main shallow water regions (Cantarell, KMZ and the southeast marine region) for development work went from 21 in 2009, with the figure remaining stable during 2010, the year of the Deepwater Horizon incident, and then dropping to 20 in 2011.

Pemex has also faced challenges contracting rigs in deepwater. Since 1999, when Pemex began exploring and drilling operations in the deepwater zones of the Gulf of Mexico, the NOC has drilled 25 wells with a geological

success rate of 60% and a commercial success rate of 48%. However, even though the success rate exceeds the industry standard of 30%-35%, Pemex has had various complications in acquiring the necessary rigs. When the first tender for a deepwater drilling rig was launched in 2004, the only rig that Pemex was able to find had a water depth capacity of just 1,000m. When the company decided to ramp up deepwater exploration in 2006, it could not find a single rig to contract: it was only in 2007 that Pemex managed to contract three deepwater drilling rigs, which finally began to arrive in Mexican waters three years later.