Q: PEMEX spent MX$35 billion on exploration in 2015. How was this amount spent, and what are the most outstanding results?

A: If exploration activities are meant to turn non-discovered prospective resources into prospective resources, we had a successful year, as we discovered 1.1 billion boe. However, 400 million boe in deepwater resources became contingent resources because at the average 2015 oil prices, these discoveries are not commercial. We also did some delineation activities in the southern deepwater Gulf of Mexico gas province and in some reservoirs in Perdido, such as Exploratus. We also found oil in Cratos, but we will have to wait for higher prices before developing this field. 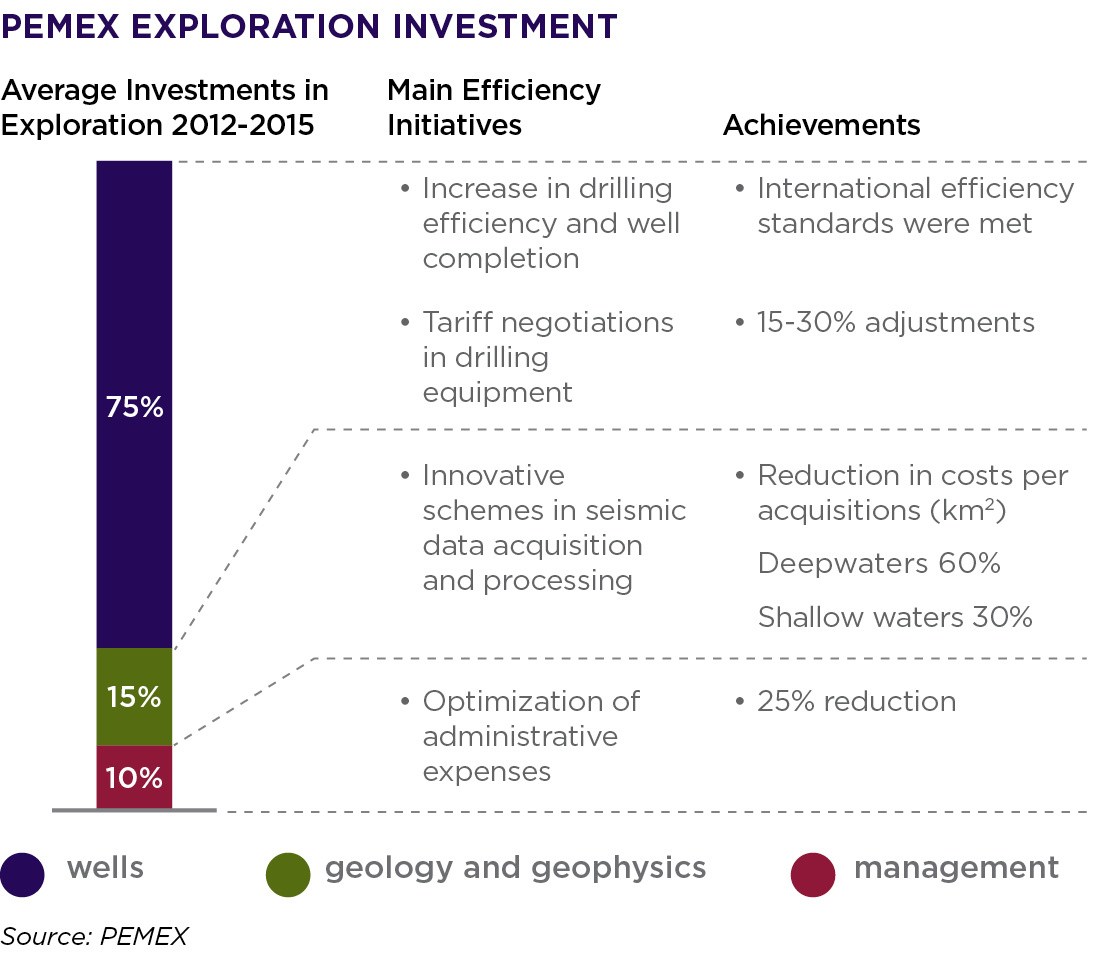 Last year we carried out some important work in shallow waters that led to the discovery of six fields, which amount to 650 million boe. The six fields we discovered last year can start producing in two or four years and yield around 200,000 boe that will allow it to maintain the country’s production platform. There are two fields that seem particularly promising: Xikin and Esah. In the first, we will drill a new delineation well this year to generate more certainty and accelerate its development. Esah is also a significant discovery that is easier to manage, so we will begin the development stage once the project is sanctioned. Another discovery worth mentioning is the Tetl field, which was found through the Tecoalli-1001 well. We will drill a delineation well in Tetl to learn more about this field and plan the future production. Finally, Jaatsul is another discovery where we are about to start appraisal drilling operations with the objective of reducing uncertainty in reservoir size and then define the wells and facilities needed to exploit it

Q: To what do you attribute the 45% success rate of the 30 exploration wells you drilled last year?

A: This success rate lies within the average of international operators during the last five years. Considering discoveries that are not commercial due to low oil prices, the success rate would have been 38%. The most important factor is the fact that we know the geology, although it is also worth mentioning that we are harvesting the benefits of our investments in technology and high-quality seismic data. For shallow water blocks in the Gulf, we acquired close to 2,000km2 of seismic data, including multicomponent, full-azimuth, long offset and high-density ocean bottom cable, and wide azimuth variable depth high-density streamer surveys. These allowed us to improve subsurface imaging in areas where prospective resources were unclear. A multidisciplinary approach to geological knowledge paired with the application of cutting-edge technologies have enabled us to continue advancing with positive results. Any company with a commercial success rate of 30% or more can be considered an accomplished player.

The current oil price is forcing us to focus in areas with lower investment risk, mainly in smaller but more profitable areas. This means we have decelerated our deepwater activities and moved to shallow water and onshore plays. Nonetheless, Mexico’s potential in deepwater is enormous, just like that in unconventional resources. PEMEX’s challenge is to work efficiently in these resources, especially given the potential for shale we have identified in the Tampico-Misantla basin. Although the current economic landscape does not allow for these resources to be developed, we need to advance with prudent investments in a strategic way so that we can obtain the necessary knowledge and be ready to produce once the oil price settles.

Q: What are the drivers behind your shift form large reservoirs to more profitable ones?

A: Our current exploration strategy responds to the oil price. In times with limited financial resources, just as the rest of the industry, PEMEX has to focus on the most profitable areas that can contribute reserves to support production in the short and medium term. However, we cannot lose sight of the medium and long term, especially when unconventional and deepwater resources will play an important role in Mexico’s production. Trion and Maximino have been delineated, and we are drilling a well in a prospect close to the latter. While the profitability of deepwater fields is low right now, this will not be the case in seven years.

The inclusion of exploration opportunities close to our fields gives an important upside to our farm-out areas. It is worth mentioning that in the case of deepwater exploration, PEMEX was acting on its own because we did not have another option. However, it is clear to everyone that we need partners to develop those fields. Just like we are adjusting our strategy based on the low oil price, we will also leverage on the reform to change the way we operate in deepwater fields so that we can share the risk and the rewards with other parties. Even though deepwater activities have decelerated, we have been analyzing farm-out areas in order to start the migration process with the Ministry of Energy and CNH. Once our partners are selected, we will jointly define the exploration and exploitation program for every area. We also want to participate in the fourth phase of Round One, where we will enter into a partnership and bid on blocks that are in line with PEMEX’s oil-focused exploration strategy.

Q: How is PEMEX going to interact with the multi-client market?

A: At some point carrying out seismic studies was PEMEX’s duty because the law mandated it, but now multi-client campaigns are an important instrument that will allow many players, PEMEX included, to understand the geology and evaluate the petroleum potential at lower costs. PEMEX’s efforts in deepwater basins should not be overlooked, as we acquired over 100,000km2 worth of 3D seismic from wide-azimuth and narrow azimuth using a single vessel, which allowed us to reduce costs considerably.

The new way of operating in Mexico, the multi-client market, is important because it allows us to share investments. Previously, PEMEX used to pay for the full cost of an exploration study, but now we can get a study for 20-30% of what it cost in the past. A lot of the studies being conducted are 2D seismic. From what we have seen, it is a high-quality seismic that was acquired using the most appropriate design parameters for a regional analysis of the Gulf. However, due to our limited resources and our existing knowledge of the country’s basins, these studies are not a priority for us at the moment. As for the 3D seismic that is being acquired in the Salina del Istmo Basin, we are going to wait until more reprocessing has been done before making a decision.

Q: Where are you going to focus your exploration activities for 2016, and what are your priorities?

The Tampico-Misantla Basin has a considerable potential for unconventional shale oil resources with the advantage of having existing facilities and people who have the technical knowledge on how to extract oil. The goal is to reach the same efficiency levels as companies in the US. In 2014, the extraction cost of a barrel from unconventional reservoirs was US$90, and now these companies can produce a barrel at US$40-50. In addition to speeding up the learning curve, we need a special fiscal regime for this kind of resources, which the authorities are aware of. Even though Mexico’s shale resources are not profitable right now, we need to be prepared for the next turn in oil prices. 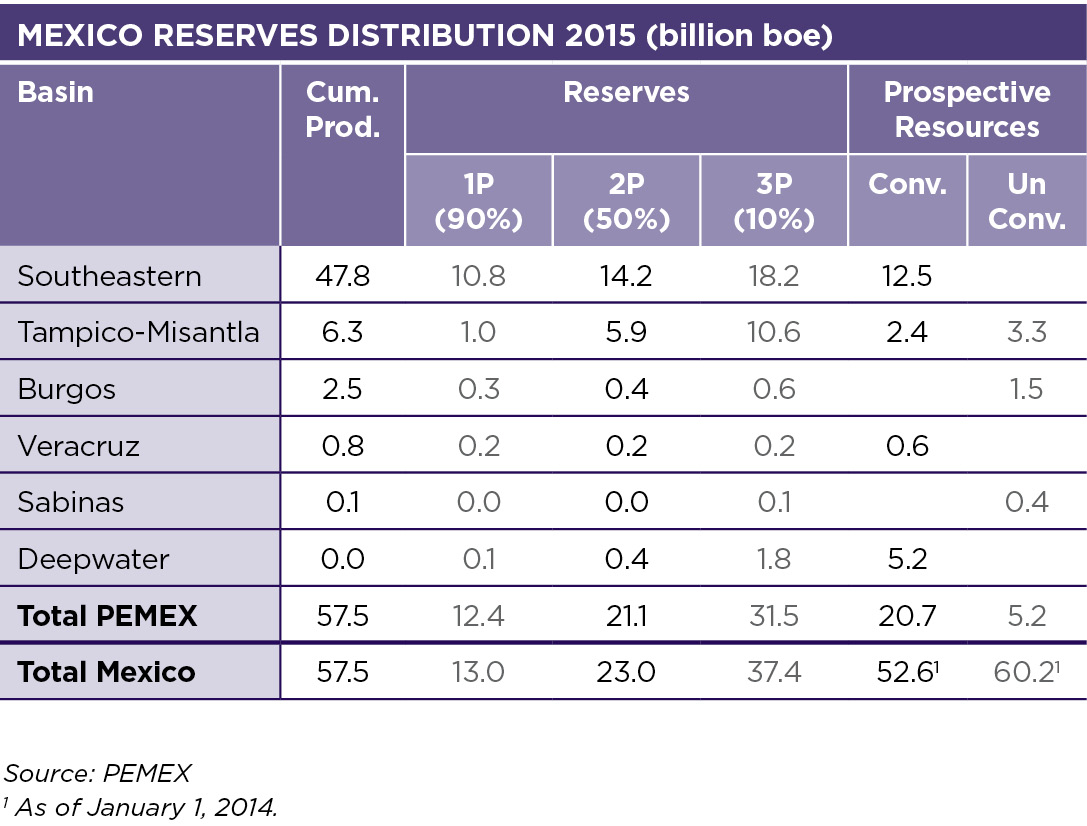